South Korean industry is bracing for the country's removal from Japan's trade whitelist on Aug. 28.

CHANGWON, South Korea -- Japan is set to officially remove South Korea from its list of preferred trade partners on Wednesday, the latest salvo in a tit-for-tat spat between the two countries. As Seoul braces for impact, manufacturers more than 300km away in Changwon are quietly fretting about their future.

The Changwon National Industrial Complex, a sprawling cluster of factories specializing in auto parts and machine tools, sits at the southern edge of the Korean peninsula. The industrial park is the country's hub for machine tools, as well as an important center of auto parts making -- and it is heavily reliant on imports from Japan to do business.

"If Japan's restrictions on exports to South Korea are implemented, that will likely impede the production of machine tools in Changwon," the Changwon Chamber of Commerce & Industry said in a report issued in August.

Concerns that politics will disrupt business have been growing in both countries since ties took a turn for the worse in July, following a row over a South Korean court ruling on wartime labor compensation by Japanese companies.

The removal of South Korea from Japan's trade whitelist means Japanese companies will have to complete a more complicated process to export particular items to the South, possibly causing delays in shipping and production.

Changwon may find itself particularly vulnerable. For production of machine tools, 98.3% of materials come from Japan, and companies in the complex imported more than $283 million worth of products related to computer numerical control systems, an important component in machine tool production, in 2018.

According to data from the Korea International Trade Association, 20.1% of all materials imported by companies operating in Changwon came from Japan, behind only China at 20.6%.

Exports of CNC systems, which operate the machine tools needed for various kinds of industrial processes, are dominated by Japan's industrial robot giant Fanuc, meaning that if South Korean companies' ties to Japan are disrupted, they may be unable to source crucial equipment. A sign calling for a boycott of Japan hangs in Changwon, a South Korean city where manufacturers rely heavily on imports from its neighbor. (Photo by Steven Borowiec)

"Exports of machine tools are worth $1.45 billion per year, which accounts for more than 9% of Changwon's total exports. If companies can't acquire core parts from Japan, that will disrupt the production of finished tools, which will then have an adverse impact on related industries. Also, more important than anything else, the longstanding trade relationship with Japan will break down," the report said.

Beyond the official report, representatives at the complex are generally keeping mum.

"Our machine tool production has become a subject of great national interest. All we can say beyond that is that the companies here are still registered in Japan as trusted partners, and are functioning well. Our position is that we have no other comment," Kim Ki-hwan, a representative of Changwon's chamber of commerce, told the Nikkei Asian Review.

The trade spat also threatens other manufacturers in Changwon. According to the chamber of commerce, the complex's producers of car tires and copper foil rely on Japan for nearly 80% of their imported materials.

The looming trade restrictions come as a manufacturers already face headwinds, not least a persistent slump in the country's auto production.

Sharif, originally from Bangladesh, has worked at an auto parts manufacturer in the complex for more than 10 years. He says problems at the complex predate the spike in tensions with Japan. "The atmosphere here has been bad for a long time because we haven't had enough work," he said.

"But if things with Japan get worse, everything on this street will disappear," Sharif said, gesturing to a long row of machinery factories.

The first trade restrictions Japan imposed on South Korea, in early July, involved chemicals integral to the production of semiconductors and display screens, both of which are key South Korean exports.

The situation escalated in early August when Japan approved the removal of South Korea from its whitelist of trusted export destinations.

In what is widely seen as a response, South Korea scrubbed Japan from its list of trusted export destinations and announced it is scrapping a bilateral military intelligence sharing agreement.

South Korea has contended that the measures by Japan amount to retaliation for Supreme Court rulings ordering Japanese companies to pay compensation to South Koreans for work during World War II. The Japanese government's position is that all such claims were settled by an agreement the two countries signed in 1965. Seoul argues that the agreement does not preclude lawsuits by individuals.

Experts say that with the Japan-South Korea dispute a subject of intense political interest in both countries, there is not a clear path to a negotiated solution.

"The trade dispute will be prolonged. Pressure will build from the United States and the international community for Korea and Japan to hold some kind of negotiations. It's likely that in the autumn they'll sit down for serious talks," said Ha Jong-moon, professor of modern Japanese history at Hanshin University in Seoul.

"The South Korean seizure of Japanese companies' assets is set to take place in January of next year, so it's possible this could drag until then. If the trade dispute does continue until next year, it will be more intense and more difficult to solve," Ha said.

In the short term, there is little the companies can do besides publicize their claim that their imports pose no security risk. "We need to make clear that our imports are not for the production of weapons, but are strictly for civilian use," said Kim Hyun-bae, head of trade standard evaluation at the Korea Security Agency of Trade and Industry.

Kim said his organization is also advising South Korean importers to check whether their Japanese partners are verified under the country's Internal Compliance Program, which grants Japanese exporters greater leeway in what items they export to which countries. South Korean companies could avoid the stepped-up restrictions by trading with ICP-verified businesses, Kim said. 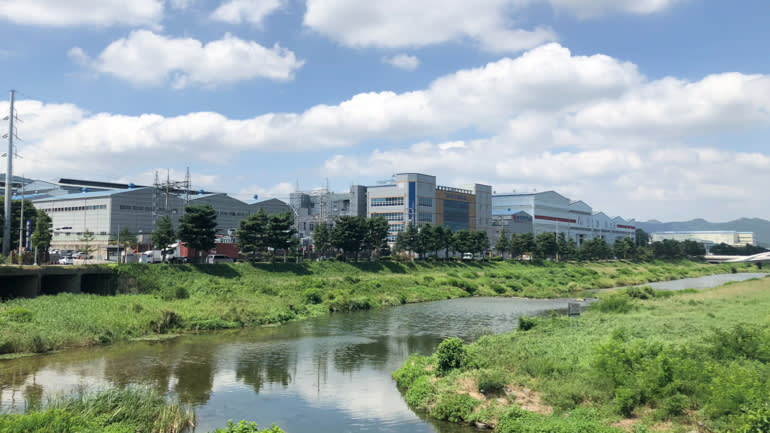 Factory workers often come to take a break by this stream in Changwon. (Photo by Steven Borowiec)

"CNC production is highly developed in Korea, but we need to respond to this situation by taking supplementary measures that improve our competitiveness," Kim said.

To that end, the South Korean trade ministry announced in mid-August plans for a joint government-private sector project to develop the domestic production of CNCs, with focus on "smart technologies" that will form the core of an innovative CNC production system by 2024. The ministry said companies including Doosan Machine Tools and Hyundai Wia.

Meanwhile, operations in Changwon churn on amid the uncertainty.

A tree-lined stream cuts through the complex, flanked by walking trails and places for workers to rest and get away from the noise of the factories.

On a recent August afternoon, one middle-aged worker was sitting by the waterside smoking a cigarette. When asked about the trade war with Japan, the man -- who declined to give his name for fear of upsetting his employer -- offered a pragmatic response.

"We don't support a particular political party," he said. "Political issues are for politicians to resolve. It isn't fair that this is affecting us. We just want to be able to do our work without any interruptions."