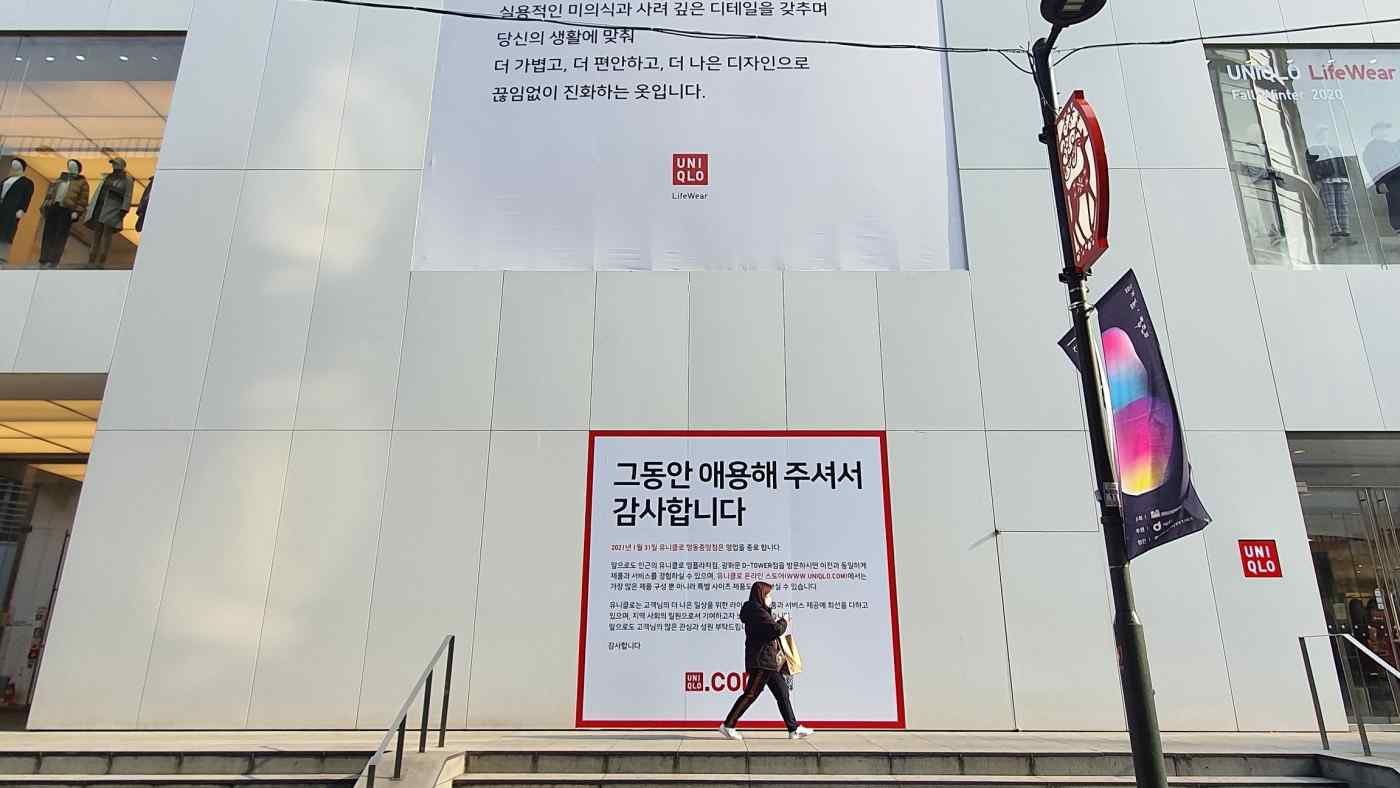 SEOUL -- Casualwear chain Uniqlo's flagship store in Seoul, which raked in 2 billion won ($1.8 million at current rates) in sales a day when it first opened in 2011, will close its doors at the end of next month.

The four-floor store, sitting in a prime location at an entrance to Myeong-dong, Seoul's busiest shopping area, now carries a sign reading, "Thank you for your patronage."

The store was a highly visible symbol of one of Japan's biggest brands -- and a focal point of the South Korean boycotts of Japanese products that began in summer 2019. The boycott movement has not fully died down, though it has faded significantly since its early days.

The reasons for the Uniqlo closure go beyond the boycott. "Foreign tourism has disappeared because of the coronavirus, which has devastated the whole retail sector," a staffer said. Myeong-dong is a must-see spot for practically all visitors to the country, and with that traffic gone, stores have been shuttered all along the district's main street.

But the movement was a contributing factor. With the coronavirus coming on the heels of the boycott, Uniqlo operator Fast Retailing's South Korean arm saw revenue drop by half for the year ended in August, and logged an operating loss of 88.3 billion won, or more than $80 million, for that period.

The boycott followed Japan's decision in July of last year to restrict exports of chipmaking materials to South Korea. While not talked about much now, it has not gone away completely.

Products with symbolic significance, such as apparel, beer and autos, are still feeling the pinch. Sales of Japanese cars have yet to return to pre-boycott levels. Nissan Motor pulled out of the market entirely and has reported zero sales here since October.

On the other hand, there are a few Japanese products that have transcended political frictions to gain wide followings in South Korea.

Toymaker Bandai is set to release the Jordy Tamagotchi on Dec. 18. When preorders opened on Dec. 3, the company immediately sold out the available inventory.

Jordy is a popular mascot character and stamp on the South Korean chat app Kakao Talk. In the Tamagotchi version, the user cares for Jordy until he lands a full-time job.

Tamagotchi took the world by storm in the late 1990s. Sales of the device ceased in South Korea once the craze faded away. Last year, Bandai brought back newly designed Tamagotchi with displays in Hangul, the Korean alphabet.

South Korea is in the middle of a retro boom. The combination of Tamagotchi's nostalgia value with Jordy's preexisting popularity (and his struggle to find employment) struck a chord with the younger generation.

The Tamagotchi "broke the all-time record for toy orders in South Korea," said a representative from Bandai Namco Korea.

Sony sold out its PlayStation 5 in South Korea soon after the release. The console is still hard to come by on the Sony Korea online store.

This spring, long lines formed at electronic shops across the country in anticipation of purchasing Nintendo's new installment in the Animal Crossing series. Fishing gear made by Japan's Daiwa and Shimano remain popular as well.

What facilitated the boycotts of Japanese products are retailers who refrained from stocking the goods out of concern for the blowback from customers. For a time, Japanese-made beer went missing from every convenience store and supermarket.

Online retailing helped cushion the damage from such business decisions.

"Internet sales grew in proportion with what couldn't be purchased at physical stores," said a source close to a Japanese manufacturer.

This approach now even has its own name: "selective boycotting." The idea is that buying Japanese is sometimes unavoidable when there are no alternatives.

Those who staunchly reject all Japanese products are critical of the selective approach. But some products, like the Tamagotchi and the PS5, continue to capture many South Korean hearts despite even amid anti-Japanese sentiments.

Relations between Japan and South Korea are now considered to be at one of its lowest points in history. But about 10 million people used to travel between the two countries just two years ago, leading to an increase in South Koreas who have seen Japan firsthand. Many top-notch restaurants serving a range of Japanese foods from ramen to tempura rice bowls are also popping up in Seoul, attracting long lines of customers.

There is little sign of a thaw in bilateral ties, and the countries still face a multitude of issues from historical disputes to wastewater disposal related to the 2011 Fukushima nuclear accident that could reignite boycotts. Still, strong products and services could override political rifts and pressures.