Strict controls on foreigners working in the world's third-largest economy have kept Japanese society largely homogeneous compared with other developed nations. But the harsh realities of an aging and shrinking population have pushed Abe's government to enter unknown territory with a plan that has long-lasting social and economic implications.

Abe's cabinet on Friday approved a draft bill and submitted it to parliament in a bid to get the program started in April.

Under the plan, there will be two visa categories -- one for unskilled workers, who can stay alone for five years and with no possibility of extension, and another for skilled workers, who will be allowed to bring their families and extend their stay.

Japan already has frameworks to accommodate overseas workers. The number of foreigners employed in the country hit a record 1.27 million in October 2017, an 18% increase from the previous year. But the labor market remains extremely tight: The unemployment rate edged down to 2.3% in September, close to the lowest level since 1992.

The plan will cover 14 sectors facing the most severe labor shortages -- even with rising elderly and female participation -- including agriculture, nursing care and construction.

"The new rules should make it easier to hire foreigners in the medical sector, for example, where staff shortages are particularly severe," said Marcel Thieliant, senior Japan economist at Capital Economics.

But there are many political hurdles ahead. Some conservative members of Abe's ruling Liberal Democratic Party have attacked the bill. Some lawmakers see it potentially paving the way to permanent residency, while others have cited a possible increase in crime and the challenge of handling increased arrivals. Abe has been keen to play down the significance of the bill, and it will be revisited in three years. The legislation will include a provision to keep new foreign workers out of sectors where the labor shortage has been resolved.

"Let me be clear: We are not pursuing what is commonly considered an immigration policy," Abe said during a tense parliament debate on Thursday.

The battle between ruling and opposition parties is also heating up. The opposition is demanding the legislation be included in a list of priority bills, a categorization that enables lawmakers to grill Abe over the plan in parliament. The ruling camp plans to reject this motion to prevent delays in the bill's passage.

Yuichiro Tamaki, head of the Democratic Party for the People, called the draft law "an issue related to the foundations of Japanese society."

Democratic countries tend to limit immigration during economic downturns due to fears of job losses among citizens, said a spokesperson for JAC Recruitment, a job search company with operations across Southeast Asia. "You can't change the lives of people overnight, depending on the political situation. Japan needs to be ready for this."

Other analysts question Japan's attractiveness for foreign workers over the long term.

"Labor shortage is a global issue," said Koya Miyamae, senior economist at SMBC Nikko Securities in Tokyo. "Foreign workers will help cushion the labor shortage in the short term, but optimizing the economy for a smaller population, through investment and productivity increases, is also crucial." 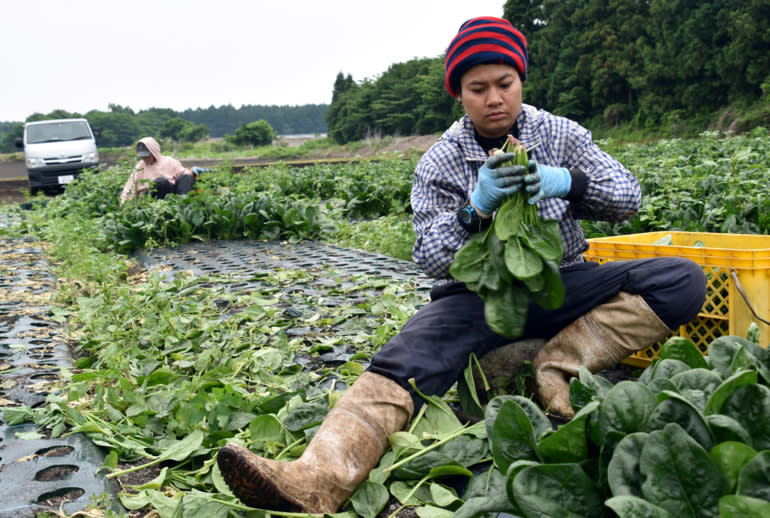 Workers from Thailand pick crops on a farm in Gunma Prefecture, Japan.   © Reuters

Some problems have emerged from the recent rise in foreign workers.

There have been reports of foreign workers exploiting schemes to bring relatives to Japan for expensive medical treatment, covered under the guest worker's medical insurance. Some 7,000 people working under a technical intern training program went missing last year, prompting the government to upgrade the immigration bureau and supervise companies employing foreigners.

But the public appears to be broadly behind the program. In a Nikkei survey conducted last weekend with TV Tokyo, 54% of respondents supported the plan, with 34% opposing it. Young people overwhelming back the plan, with older voters expressing less support.

Most economists agree that preparations for accepting more foreign workers will only grow in importance.

Thieliant at Capital Economics said the number entering Japan needs to more than double to completely offset the decline in the working-age population over the next decade -- something that is unlikely to be accomplished even with the new system.

Even so, he said: "There's no turning back now."