TOKYO -- Japanese Prime Minister Shinzo Abe's cabinet on Friday approved legislation to admit more foreign workers to the country after a series of heated exchanges in parliament a day earlier.

Proposed as a remedy to Japan's severe labor shortage, the plan will create two visa categories. One is designed for unskilled workers who can stay alone for five years and with no possibility of extension. The other is for skilled people, and will allow them to bring their families and extend their stay.

Conservative members of Abe's Liberal Democratic Party have criticized the bill, with the ruling group only endorsing the program on condition that it is reviewed within a few years. Some LDP lawmakers see it potentially paving the way to permanent residency, while others have cited a possible increase in crime and the challenge of handling increased arrivals.

The legislation will now be submitted to parliament, where the government targets passage in the current session ending Dec. 10, with a view to implementation in April.

Accepting workers from overseas has quickly evolved into a national debate. Strict immigration policies have kept Japanese society largely homogeneous compared with other developed nations. But the economic realities of an aging and shrinking population have pushed Abe's government to look at ways of bringing in more foreign workers.

The country's jobless rate edged down to 2.3% in September, around the lowest level since 1992. For every 100 job seekers in the country, there are 164 openings. With the working age population projected to start shrinking over the next few years, the labor deficit is expected to worsen further.

Facing criticism in parliament this week, Abe said the program was "only for the industries truly in need of workers."

Justice Minister Takashi Yamashita, however, told the Diet on Thursday that not enough thought had been given to putting a cap on the number of arrivals.

The public appears to be broadly behind the program. In a Nikkei survey conducted last weekend with TV Tokyo, 54% of respondents supported the plan, with 34% opposing it. Young people overwhelming back the plan, with older voters expressing less support.

At least one opposition party has given support for accepting immigrants -- the first time a major Japanese political party has done so.

"We propose a comprehensive system that allows foreign workers to bring families with them and ensures equal pay for equal work," Democratic Party for the People leader Yuichiro Tamaki said in a Wednesday news conference. "It is an immigration policy comparable to that of Western nations," he said.

Other opposition parties, however, have promised an all-out fight to block the legislation. 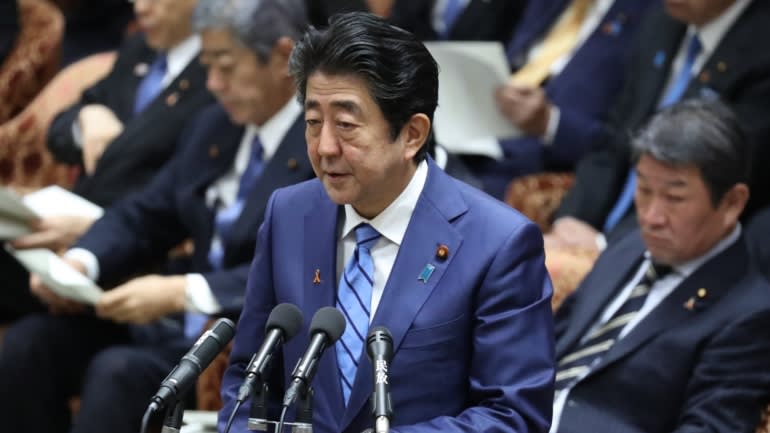 While the government's plan does not cap the number of visas, the opposition camp has compiled a counterproposal that sets limits.

"Do you plan to open up the country to allow the coexistence of multiple cultures, or will you ask foreign workers to become Japanese?" Akira Nagatsuma, acting head of the largest opposition Constitutional Democratic Party of Japan asked on Thursday.

"Let me be clear: We are not pursuing what is commonly considered an immigration policy," the prime minister replied, stressing that the program is designed to help sectors suffering from worker shortages for a limited period of time.

"We should not force our values on foreigners," he said. "We will create an environment to realize a society of coexistence."

Abe's plan will cover 14 sectors facing the most severe labor shortages, including agriculture, nursing care and construction. As for the estimated number of arrivals, the government explained that it does not plan to set a limit.

"We are drawing up estimates based on demand in the 14 industries covered by the program, including agriculture, hotels and construction," said Yamashita. "We plan to present estimates as soon as possible."

Meanwhile, an alliance of opposition parties including the Constitutional Democrats and the Democratic Party for the People is drawing up a counterplan to replace the existing technical internship program with a visa program.

The program would set caps by sector and region based on labor market surveys and create an agency dedicated to assisting foreign workers and protecting their rights.

Under that plan, workers would be permitted stays of up to three years, along with their families, with an option to renew the visa with no limits, paving a path to permanent residency. They would have freedom to choose their jobs and receive compensation comparable to that of Japanese workers.