Many overseas workers left to struggle without safety nets OSAKA -- COVID-19 is throwing growing numbers of foreign workers in Japan out of work, and leaving many in financially precarious situations with no solution in sight.

As the nation's factories throttle back because of slumping demand, many foreign workers have been told they are no longer needed and are on their own. They came to Japan to fill labor shortages, but assisting them has become a major economic issue. Most cannot yet return home, and there is nothing for them in Japan.

"Me, I want to work," said a 38-year-old Brazilian automotive industry worker whose contract was terminated in March after just six months. Along with her partner and their three children, she has had to vacate their company housing. Her partner's factory has been shuttered, and she is expecting a fourth child soon. "We are really in trouble."

Union Mie, a labor union based in Tsu, has Portuguese and Spanish speakers on staff. It has provided 400 consultations since March -- up nearly 70% since the same time last year and almost 90% of these to foreigners with contract terminations. "Coronavirus cuts are really running rampant," Akai Jinbu, the union's secretary general told Nikkei.

There are 1.66 million foreign workers in Japan, and 340,000 of them work on a contract or dispatch basis. The automotive sector is a major employer of such workers, but sluggish demand for cars has sent a negative ripple along the entire supply chain. Foreign workers with tenuous employment terms are particularly vulnerable.

"To start with, the number of foreign contract workers was cut," said a 40-year old Indonesian employed as a welder at a car plant in Hamamatsu. Although he is a regular worker with fixed-term employment, his falling workload meant his pay in April was only 170,000 yen ($1,590) -- half what he earned in March. That is not enough to support his wife and three children, who live with him in Japan, and his parents back home. They now need state support, which has only just begun to flow.

Government support packages include payments of 100,000 yen, and foreign nationals registered as residents are eligible to receive them. At the end of March, financial assistance was expanded to include a range of interest-free loans of up to 200,000 yen per month. This sort of support is usually confined to low-income households, but workers who have lost their jobs to COVID-19 have also become eligible.

The system run by the social welfare council in Aichi prefecture was never expected to process so many claims, and is close to its limit. In normal times, there are about 300 applications per year. The figure for the past month alone was 7,000 with foreign nationals making up 20% of applicants. The department handling the process normally has a staff of four. Even with 15 people now, work continues deep into the night every day. 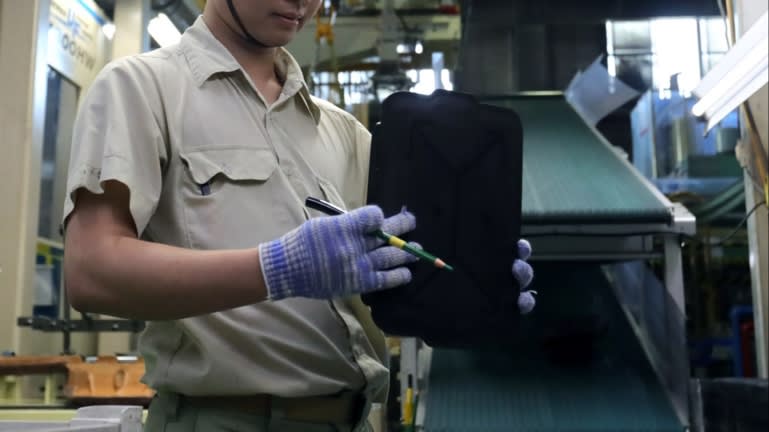 While foreign workers make up only about 2% of Japan's overall workforce, they are needed to overcome structural employment shortages. (Photo by Ken Kobayashi)

"If we consider that the children of foreign workers will also be important to the labor force in the future, then measures like deferring rent payments could be acceptable," said Miki Kohara, a professor at the Osaka School of International Public Policy at Osaka University. However, policies of this sort have not been formulated in any detail.

The number of distressed foreign workers highlights the difficulty of ensuring stable livelihoods for an imported labor force. Financial support of this kind is normally intended for long-term and permanent residents, not people working in Japan for limited periods.

Meanwhile, many foreign workers remain unaware of their financial support options, or face barriers accessing it, such as language. "Only a few foreign nationals are being saved by the safety net," said Kiyoto Tanno, a professor at Tokyo Metropolitan University.

The ethics of the companies involved are sometimes questionable. In the northerly Kanto region, an Indonesian in his thirties was recently terminated at a lumber mill that had employed him for three years. After staying home sick for two weeks, he was unable to return to work. "The amount of work has dropped, so you can just quit," he was told. Although directly employed, he was not enrolled in a social insurance program.

"Problems that have existed from well before the coronavirus are spilling out," said Natsuko Saeki, an associate professor at Nagoya Gakuin University. Saeki is also a voluntary adviser to Indonesians on daily life in Japan.

Some municipalities with large numbers of foreign workers have followed their own initiatives. In Oizumi, a town in Gunma prefecture where about 20% of the inhabitants are foreign, the local government will provide 20,000 yen for workers from temporary agencies who are laid off by their employers, and 10,000 yen per month for people who are unemployed and having difficulty paying rent, up to a maximum of three months. "We're closer to the residents, so we have a better idea of the actual situation than the national government," said a member of the town's multicultural collaboration section.

Kawakami, a village in Nagano prefecture, a major lettuce-producing area, hosts a government program and accepted total of about 1,000 trainees from China and other countries. Currently, less than 70% of the trainees have arrived due to the restrictions on entering the country. Since the plan stipulated the number of trainees required, there are not enough to run the farms.

Offsetting this, there were many foreign workers at hotels and Japanese-style inns with nothing to do. By going through temporary employment agencies, at least 100 farmers have started taking on these workers.

Foreign workers account for only 2% of Japan's workforce, but they support sectors facing structural shortages. "Can the Japanese economy recover after the coronavirus if the lives of the people who support these areas are broken?" asked Jinbu of Union Mie. For both the public and private sectors, there is still a need to support these crucial workers without being too overwhelmed by aggregate demand vanishing before their eyes.