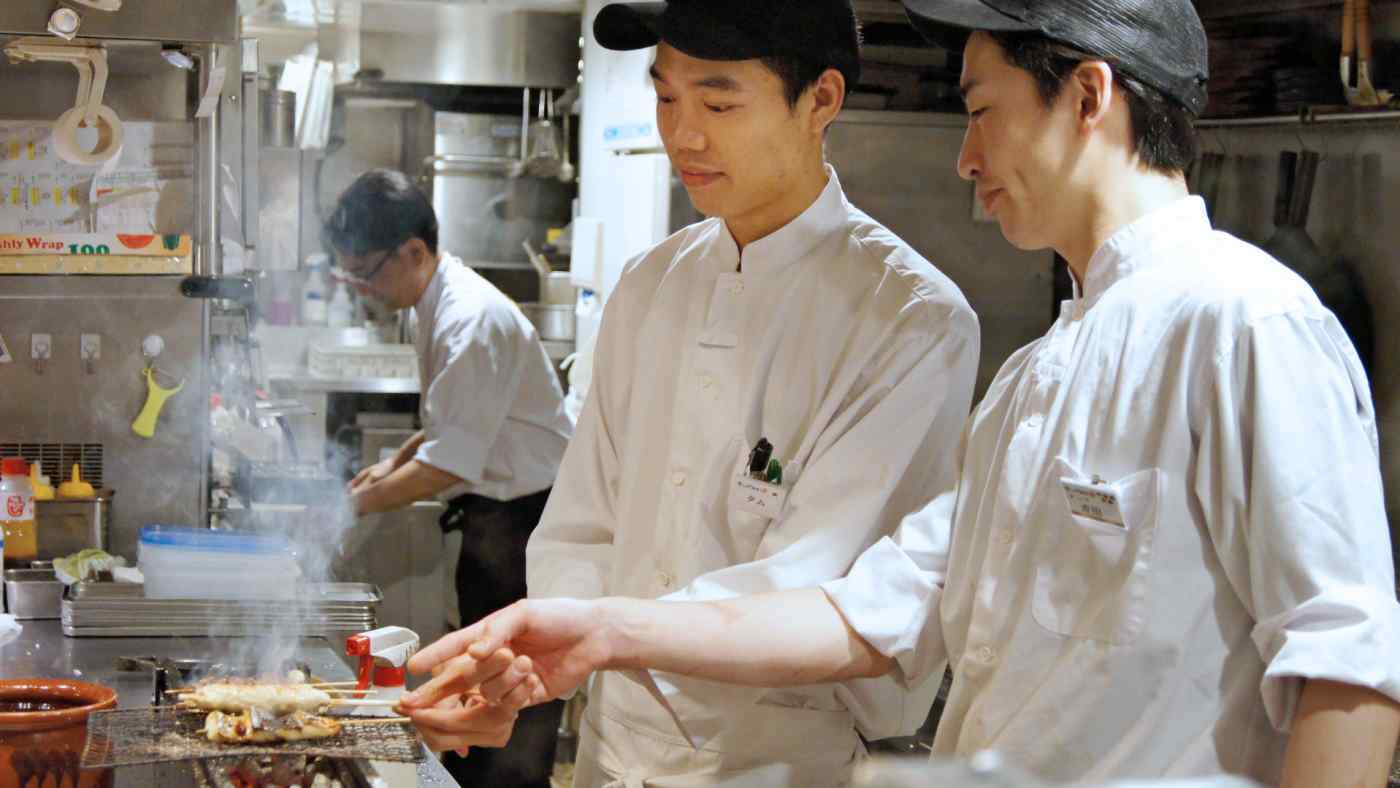 At Ten Allied, which runs the Tengu Sakaba chain of izakaya pubs, non-Japanese part-timers have been part of its labor union since 1996.
Nikkei staff writersNovember 26, 2018 15:30 JST | Japan
CopyCopied

TOKYO -- More foreign nationals working at Japanese companies are joining labor unions, and the service industry that needs their labor is discovering that treating foreigners well is essential to keeping them.

But not all of Japan's foreign workers are treated fairly. "Some foreigners are forced to work under poor working conditions, such as low wages and illegal employment," said Tomoya Suzuki of the NLI Research Institute. "And some have to pay for medical bills out of their own pockets -- with no workers' compensation. As the government has instructed, Japanese companies should treat foreign employees in the same manner they treat Japanese employees."

In October 2017, there were 1.28 million foreign workers in Japan, nearly double the 650,000 such laborers in 2010, according to data from the Ministry of Health, Labor and Welfare. Another set of numbers tells the story behind the influx: Japan's working-age population peaked at 87 million in 1995 and has been sliding ever since. In the intervening decades, foreign nationals, females and seniors have come to make up integral chunks of the country's workforce.

Now unions are filling up with these new workers.

The trend began decades ago. At Ten Allied, which runs the Tengu Sakaba chain of izakaya pubs, 1996 was the first year for non-Japanese part-timers to join the company's employees' union.

At Hidakaya ramen chain operator Hiday Hidaka, a union that began this past spring now has about 9,000 members, of which nearly 3,000 are non-Japanese part-timers.

Before the union was established, the company's management held meetings where executives could directly ask part-time workers about how things are going.

Now employees can come together in making requests through the union, which "is easier for the management to deal with," Director Juichi Shima said.

Labor costs eat up more than 30% of Hiday Hidaka's total sales. When the ramen chain this past spring raised wages for part-time employees by 20 yen (18 cents) per hour, it took on an added burden of 200 million yen a year.

"We want part-time employees, including foreign students who are used to the job, to work for our company for as long as possible," Shima said.

The company's executives believe the union will help the chain do just that.

In the coming years, Japan will need even more workers -- and legal changes to allow foreigners to be among them. One big change could be on the way. Lawmakers are currently debating a revision to the Immigration Control and Refugee Recognition Act. If the bill passes, Prime Minister Shinzo Abe would like the revised law to take effect in fiscal 2019, opening the door to about 340,000 foreign nationals over five years.

As the need for foreign workers increases, Japanese employers are having to compete for them with good working conditions. Fujita Kanko, which runs the Washington Hotel chain and other establishments, in late July opened Origami Asakusa, a Japanese restaurant, in Tokyo's Asakusa district.

Seven of the restaurant's 17 employees are foreigners -- from Indonesia, Saudi Arabia and other countries. Perhaps one reason the restaurant attracted some of these workers is because it has an Islamic prayer room that guests and employees can use.

"It is important for Japanese companies [to accommodate foreign workers' traditions,] such as allowing employees to take off during the Chinese Lunar New Year holiday," said Yoshinobu Inoue, president of Asegonia, a Tokyo-based job site for Vietnamese students.

At UA Zensen, Japan's largest labor union for retail and restaurant workers, some 58% of its 1.78 million union members are short-term workers, including part-timers. This year's spring labor-management negotiations resulted in per capita wages increasing 2.47%. It was the fourth consecutive year for the percentage increase to set a record.

But it is not all about money. Many foreign workers are trying to protect their rights by joining unions, according to Chieko Kamibayashi, a professor who studies foreign worker and immigration policy at Hosei University in Tokyo.