Muslims struggle to bury their dead in Japan, a nation of cremation

Interment is rare and often meets opposition from local residents FUKUOKA, Japan -- Muslims living in Japan have a hard time trying to find land for burials in a country where interment is rare and faces a cultural barrier.

It is a big challenge to secure burial ground in a country where virtually all of the deceased are cremated and few areas have any places for interment. This poses a serious problem for Muslims because cremation is forbidden in Islam.

Muslims' ordeal in burying loved ones also poses challenges for Japan, a country with a shrinking population that is facing a growing need to accept more foreign nationals with different customs and cultural backgrounds.

One corner of a Catholic cemetery in the mountains of the Oita Prefecture city of Beppu stands in sharp contrast with area around it because the graves have simple stone markers instead of crosses.

The horizontal slabs, threatened by weeds, mark Muslim graves. One in the corner marks the resting place of the eldest son of Zafar Saeed, 39, a resident of the city. Saeed's son died in a miscarriage nine years ago.

On top of the devastation of his son's death, Saeed says he also went through a deeply painful experience as he tried to find a place for burying the body. He spent several hours at the municipal office seeking information about possible places of interment, and finally learned about the Catholic cemetery.

About 20 Muslims have been buried at the cemetery, but now, Saeed said, "There is no more space here."

Saeed came to Japan from Pakistan in 2000 and has since become naturalized. "I intend to return to the soil here when I die," he said. "A graveyard for burial nearby would give me peace of mind."

In Japan, more than 99% of the dead are cremated. There are not many cemeteries where a body can be buried. While the law does not prohibit interment, plans to create a cemetery for interring the dead can face massive obstacles -- most notably opposition from the local community.

In some areas, ordinances ban burials on public hygiene grounds, according to an official at the Health Ministry.

There are several Muslim cemeteries in Japan, mainly in the northern island of Hokkaido and eastern prefectures including Shizuoka and Yamanashi. But there are none in the Chugoku, Shikoku and Kyushu regions of western Japan.

A Pakistani living in Fukuoka Prefecture who has assisted about 10 Muslim burials has many stories to tell about how a simple burial can turn into a challenging mission for Muslims in Japan. He once had to transport a body 700 km from Kyushu to Yamanashi and send another one by air from Okinawa. These tasks "cost a lot of time and money," he said. "All Muslims (in Japan) are worrying about their graves."

To deal with the problem, a Muslim organization in Oita has purchased some 8,000 sq. meters of land in the mountains beside the town of Hiji in order to create a cemetery with space for about 100 Muslim graves.

But the plan has hit a snag. While the religious body was in preliminary talks about the construction of the cemetery with the town's government in August, a group of about 100 local residents submitted a petition against the project to the municipal government and assembly.

It noted that an agricultural irrigation pond and a source of drinking water lie near the planned site and claimed that the cemetery would pose a risk to the reputation of nearby crops through rumors that harvests could be polluted by water from the cemetery.

Although the consent of local residents is not required for building a graveyard, the municipal government has yet to approve the plan.

Khan Muhammad Tahir Abbas, a professor at Ritsumeikan Asia Pacific University who heads the Oita organization, spent 10 years looking for land for the cemetery and explaining the project to local residents.

"Time is running out. If this project falls through, we have no other option," said Khan, who is anxiously awaiting the town's decision. 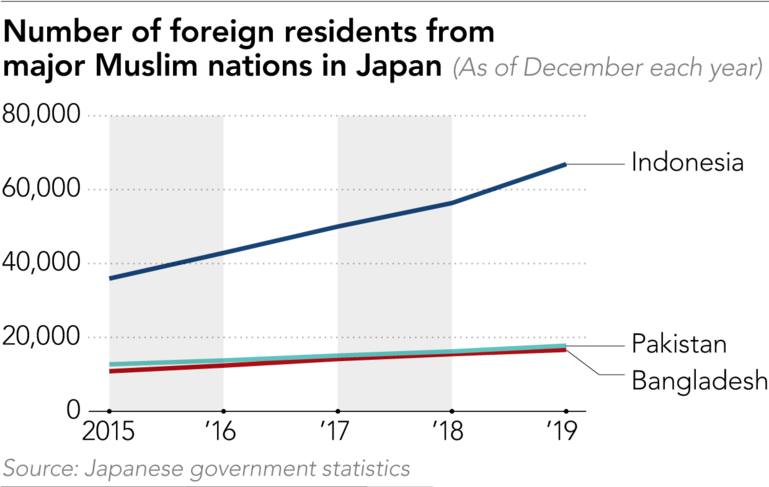 According to government data, the number of people coming to live in Japan from Asian countries with a large Muslim population has been on the rise, mainly due to the government's technical intern training program providing employment opportunities for foreign nationals. About 66,800 Indonesians resided in Japan as of December 2019, up 86% from four years earlier. Muslims account for over 80% of the country's population. There were also 16,600 Bangladeshis, up 50%, and 17,700 Pakistanis, up 40%. Islam is the state religion of Pakistan.

Growth in the number of Muslim residents during the period apparently was faster than the 30% increase in the overall population of foreign residents.

While there are no government statistics concerning the Muslim population in Japan, Hirofumi Tanada, a professor emeritus at Waseda University, has estimated that 230,000 Muslims lived in Japan at the end of 2019, after doubling in a decade. Of that total, 180,000 were foreign nationals, of whom 40% had some form of residency status.

A growing number of Japanese are also becoming Muslims because of international marriages and other reasons.

This is putting increased pressure on Japanese society to tackle the challenge of how to help Muslims find land for their graves in this country.

"Japanese Muslims could help find a solution by taking part in talks over the issue," Tanada said. "I hope to see more efforts for coexistence to ensure that Japanese society will accept graveyards built according to Islamic law, for the sake of all Muslims in Japan -- including Japanese ones."