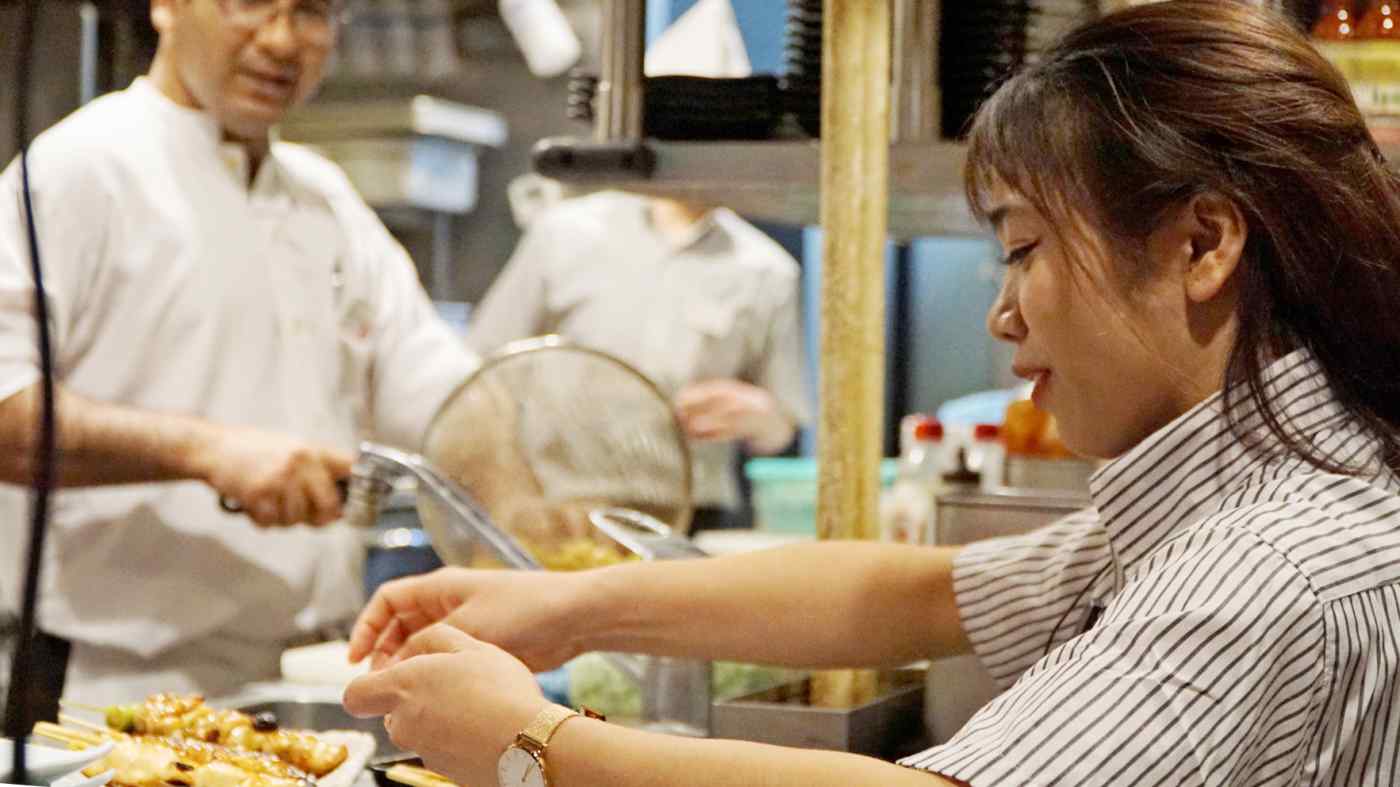 TOKYO -- A revised immigration law that took effect in April has brought Japanese restaurant operators and other labor-crunch-challenged employers to Southeast Asia.

Watami, which operates a chain of Japanese-style pubs, has set up a joint venture in Singapore to offer support to those eager to take skills exams for Japan's new visa program. By quickly setting up a regional training base, the company hopes to beat its rivals in securing labor for its business in Japan.

Watami will initially send workers to Japan from Cambodia, where it operates restaurants.

"We will accept foreign workers on a stable basis," said Takeshi Oda, a Watami director, who added that the number of these workers will increase over time.

The Singapore venture, set up with ITbook Holdings, a Tokyo-based management consultancy, will work with Japanese-language schools and other businesses in neighboring countries. It will not only send workers to Watami restaurants but also refer them to other restaurant owners in Japan.

But there are roadblocks to overcome before Japanese businesses can return with new workers: Japan has not finalized details of testing and other standards. Companies from South Korea and other countries with evaporating labor pools are competing for the same hands. Japan has a reputation for exploiting technical trainees.

That revised law, though, might be on the verge of making a dent.

At a boarding school in a suburb of Phnom Penh that opened in April, some 20 Cambodians in their 20s and 30s study Japanese from morning to evening. 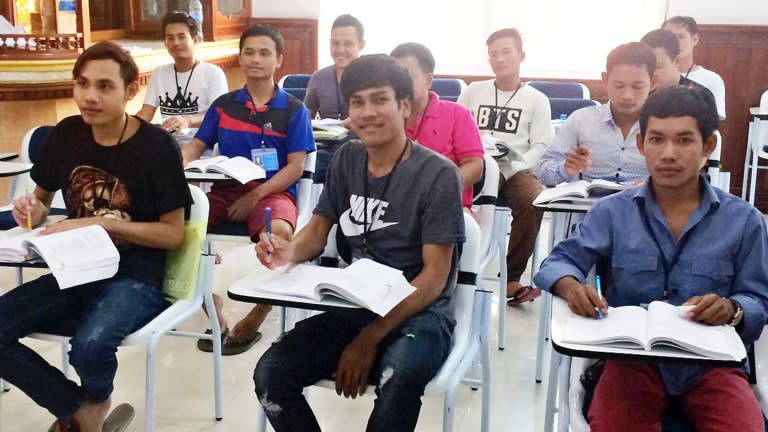 These young men are studying Japanese outside of Phnom Penh, hoping to qualify for a new category of visa that will allow them to work in Japan.

The school is managed by One Visa, a Tokyo-based startup offering online visa application services under the revised immigration law. It plans to begin sending graduates to restaurant operators in Japan by the end of this year.

The students are eager and keep from chatting or snoozing in class. "I want to master Japanese and get a good job in Japan," said a 28-year-old who enrolled in the school after quitting a job at an information technology company.

The school charges no tuition. Instead, One Visa receives referral fees from employers that are equivalent to 30% of a hiree's annual income.

"As competition for foreign recruits is intensifying in Japan," One Visa CEO Albert Okamura said, "we will promptly establish an overseas source of workers who can be sent to Japanese companies."

The revised immigration law cites two "specified skills" visa categories and allows for up to 345,150 foreigners to enter and work in Japan over the next five years.

Category 1 allows foreigners to work for up to five years in food services, nursing care, agriculture and 11 other industries experiencing serious labor shortages.

Category 2 is applicable to the construction and shipbuilding industries. Holders can stay in Japan as long as their employment contracts are renewed. Holders of Category 1 visas can move to Category 2 if they clear certain requirements.

Some Southeast Asians appear to covet these visas, but as Japan recruits foreigners to help fill its labor pool, it is running up against a reputation earned via a technical trainee program.

The construction, agriculture, nursing care and 77 other sectors have been bringing over "technical trainees" for years now. Officially, the trainees come to Japan to gain Japanese know-how that they can eventually take back home with them. 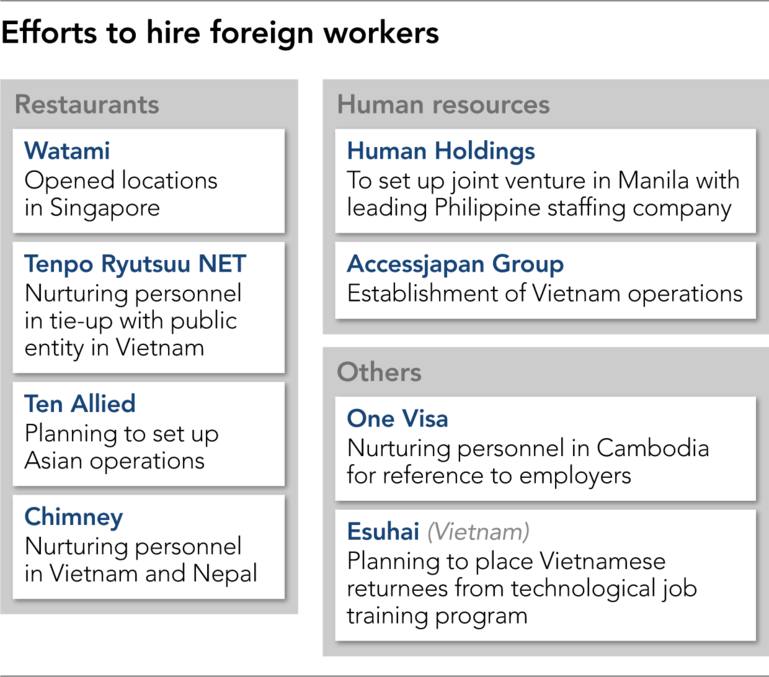 But the program has been criticized for permitting employers to hire foreign workers at unfairly low wages. It has been prone to other abuses as well. Brokers have collected fees of as much as 800,000 yen ($7,400) before sending a worker to Japan. And when trainees arrive, they often find themselves stuck with poor working conditions.

As of the end of October, some 310,000 foreign trainees were in Japan.

The Japanese government is trying to assuage fears that the program's abuses might be carried over under the revised immigration law. It is working on bilateral accords meant to eliminate malignant brokers and set rules to address problems when they occur. Memorandums of understanding have been signed with the Philippines, Cambodia and three other countries, and negotiations with four others, including Vietnam and China, are ongoing.

These accords differ from country to country. Cambodia and Mongolia, for example, send workers to Japan through state certification organizations, including those designated under the technological trainee program.

The accords will not be a cure-all. Although they call for consultations to correct abuses that crop up, the documents are not legally binding. And there is no guarantee they will rid the system of usurious brokers. An executive at one company that educates prospective workers questions whether this is even possible.

Meanwhile, negotiations with Vietnam, the biggest supplier of technical trainees to Japan, are reportedly tangled.

The technical trainee program has one other shortcoming: Foreigners who sign up and come to Japan often return home after three years. Many want to stay longer but cannot clear high hurdles, like skills tests.

The new visa categories allow for longer stays. Category 1 visa holders can stay for up to five years without having to take additional exams.

Now some companies are trying to bring back trainees who have already gone home.

Esuhai, a Ho Chi Minh City company that dispatches 2,000 Vietnamese to Japan every year via the technical trainee program, in April held a briefing for some 100 returnees wishing to work in Japan again. It is in contact with more than 20 Japanese companies that might be interested in helping them do so.

Leading shipbuilder Japan Marine United, which has employed some 500 Vietnamese as welders and painters under the technical trainee program, plans to hire more who obtain the new visas, though it has yet to map out specific measures.