MANILA -- Japan is attracting throngs of young job seekers from the Philippines, which just conducted its first exam for nursing caregivers under Tokyo's revised immigration rules.

Over 100 applicants took the exam on April 13-14 in Manila, with more test slots allocated for the May and June exams. The two-part exam tests technical skills and language proficiency, and both parts must be passed.

Japan eased its immigration law this month to attract foreign workers amid a worsening labor shortage.

Emie Bragat, 21, Jellie Legara, 23, and Fatima Carlotsa, 25, are among those hoping to take the test later this year. The girls flew to Manila from the southern city of Davao as they study for the exam in pursuit of their dream of working in Japan.

Apart from high salaries, the girls said they chose Japan because of its good treatment of non-Japanese employees. "Compared with other countries, we feel Japan protects its foreign workers," Carlotsa said.

"It's also a beautiful country and has beautiful seasons," Legara said. "The cherry blossoms are a bonus." 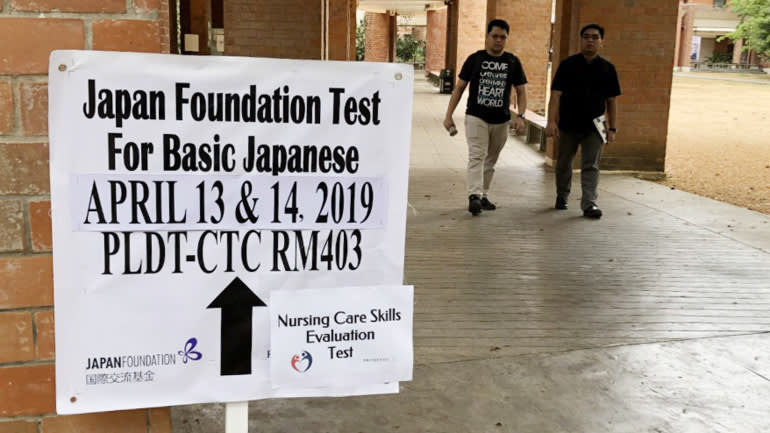 Japan is a major destination for Filipino tourists but not for the country's overseas workers, who have traditionally chosen America or Middle East. But after U.S. President President Donald Trump tightened immigration policy and reports of abuse and murders of overseas workers in the Middle East make headlines, Filipinos are looking for different shores.

"Geographically, Japan is close to the Philippines," said Jeremaiah Opiniano, executive director at the Institute of Migration and Development Issues in Manila. "We also have a cultural and diplomatic affinity with them."

The graying country plans to hire around 340,000 workers for blue-collar jobs in farming, nursing care, construction and other sectors. Workers can stay up to five years but cannot bring family members or apply for permanent residency.

Still, staffing agencies in Manila are eager to capitalize on the reform. Benchstone Enterprises, which specializes in sending entertainers to Japan, hopes to begin providing care givers and other blue-collar workers under the new rules. "This is an opportunity for us," agency owner Philip Edquiban said. Some Filipinos find the language requirement daunting, but Carlotsa and her friends have already passed Level N4 of Japanese proficiency tests -- the minimum required level of language proficiency. It took them eight hours a day for five months to study, eight hours a day, but they did it. "We had a lot of sleepless nights," Carlotsa said. "It's really a sacrifice."

"Nihongo is not easy. It could deter applicants and Japan knows that," Opiniano said. "But it's an important requirement."

Opiniano advised prospective workers -- even those who have passed the language tests -- to deepen their understanding of Japanese language and culture. "The communication gap can sometimes lead to labor abuse," he said.

Japan also faces challenges to make its revised immigration policy work, one of which concerns wages. In big Chinese cities such as Beijing and Shanghai, salaries are rising fast and they may soon match those of Japanese companies. This could make Japan less attractive for overseas workers, even more so when compared with Singapore, North America or Europe.

Another problem is that some Japanese employers have been exploiting foreign workers by paying less than the minimum wage -- a problem that the revised immigration law could rectify.

But for now, job seekers in the Philippines are happy about the prospect of working in Japan. "I will invest my salary," Carlotsa said. "Me, I'll pay off my family's debts," said Legara.