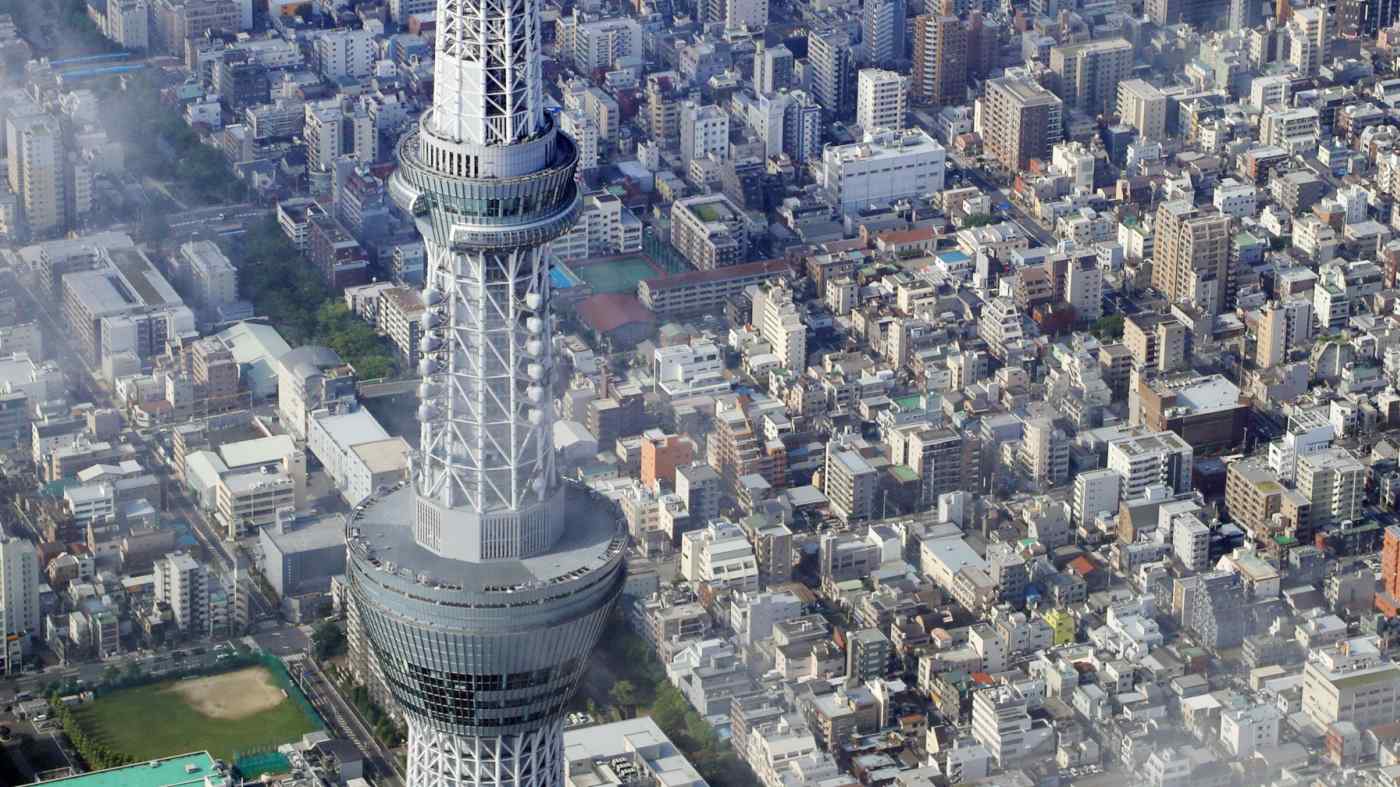 The landmark Tokyo Skytree will extend its observatory hours so visitors can experience the transition from the Heisei era to the new Reiwa era on the evening of April 30 in the sky. (Photo by Akira Kodaka)
JADA NAGUMO, AKANE OKUTSU and YUKIO TAJIMA, Nikkei staff writersApril 27, 2019 05:28 JST | Japan
CopyCopied

TOKYO -- Japan is at the dawn of a new era, and many businesses are hoping the accession of Crown Prince Naruhito to emperor will also mean a fresh start for the country's lackluster economy.

The Reiwa era begins with an unprecedented 10-day public holiday, which kicks off Saturday. The combination of the annual Golden Week holiday with additional public holidays commemorating the abdication of current Emperor Akihito on April 30 and the accession of the new emperor on May 1, has created an opportunity for businesses to penetrate.

Some 450 meters above the ground, visitors to the Tokyo Skytree will be able to experience the transition from the current Heisei era to the Reiwa era in the sky. Tokyo's landmark tower has extended the opening hours of the observatory deck to 30 minutes past midnight on Tuesday night, from the usual 10 p.m. Admission fees will be cut in half after 10 to celebrate the occasion.

Down in the famed Shibuya Crossing, arguably the busiest intersection in the world, people are expected to gather for a countdown, similar to New Year's Eve. Hitching on to the opportunity, the neighboring Shibuya Excel Hotel Tokyu has readied a package that offers eligible guests exclusive access to their 25th floor restaurant, which has an unimpaired view of the crossing below.

What makes this time different from previous era-changes is that the transition is not due to the death of the previous monarch. Emperor Akihito will be the first emperor to abdicate the Chrysanthemum throne in modern Japanese history. Instead of greeting the new era amid an atmosphere of mourning, the Reiwa era will be a celebration.

Wednesday morning, the first day of the Reiwa era, is set to be a busy one for Tokyo's department stores. Matsuya Ginza has booked some trumpet players to perform as guests enter the store. The department store will engrave the characters for Reiwa on watches and rings. 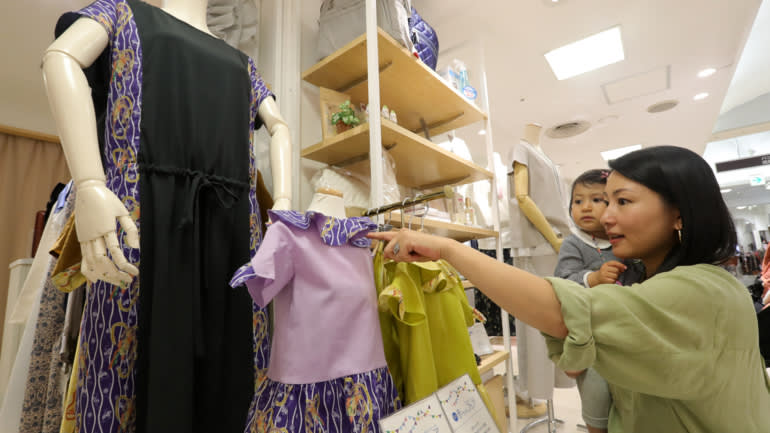 Takashimaya department store in Tokyo is offering matching clothes for mothers and children to commemorate the new Reiwa era. (Photo by Ken Kobayashi)

Kyoto-based sake maker Takara Shuzo will put into operation three of its factories on Saturday, as it makes sure that supplies do not run dry. The Japanese have a tradition of celebrating with sake, which is considered a sacred drink.

"It's a once-in-a-lifetime experience," said Midori Tatsumi, a 35-year-old Kanagawa resident. Expecting a baby in the coming months, Tatsumi feels special when she writes down her expected childbirth date as being in the year "Reiwa 1."

"I want to own things that say Reiwa, just because this is the very first year," she said.

With SMBC Nikko Securities predicting the era change will boost consumption by 377 billion yen ($3.4 billion) during the 10-day holiday, businesses from restaurants to department stores to wedding venues are ready to seize the opportunity.

For Royal Holdings, operator of family restaurant chain Royal Host, the era change is a chance to catch the eyes of consumers and promote new menus.

At its Q CAFE at the Tokyo Midtown Hibiya, one of the capital's luxurious shopping complexes, a special high tea menu is being offered until May 6 for 2,500 yen and includes chocolate brownies, fruit salad, vegetable quiche, smoked salmon, cream cheese sandwiches, and a choice of drink. The featured item is monaka, wafers in the shape of a chrysanthemum filled with jam made from beans. Chrysanthemum, kiku in Japanese, is a symbol of longevity and rejuvenation, and graces the Imperial seal. "We put our feelings of celebration into the kiku monaka," said a spokesperson for Royal Holdings.

The Ritz-Carlton Hotel in Osaka is offering a cocktail inspired by the Reiwa era on its fifth floor bar. The drink, the Kaoru-Reiwa, was created by mixologist Mihoko Sato. The name Kaoru is cited in the Manyoshu, the oldest existing anthology of Japanese poetry, which is also the origin of the term "Reiwa." The cocktail combines sake from Kyoto and vodka, mixed with syrup made from a mixture of strawberries, mini tomatoes and late-ripening citrus.

"There have been orders every day since we started offering it," Sato said. "It has been popular among both men and women and I've received compliments for its delicious, refreshing taste."

According to Akiyoshi Takumori, chief economist at Sumitomo Mitsui DS Asset Management, commemorative consumption will have a major impact, and many businesses that offer experience-based consumption opportunities will enjoy a boost.

"The new era restores and refreshes people's spirit, so the Reiwa era will be a positive change for business conditions," said Takumori. "Looking back at 1989, when the Heisei era began, and 2000, when the new millennium started, both years had solid consumer spending and capital investment for the January-to-March period."

The Reiwa boom is entering the digital sphere as well. Businesses are lining up to secure an internet domain that includes the word "Reiwa." A domain registration service operated by GMO Internet has seen 2,752 applications in the three weeks leading up to April 22.

Traders on the Tokyo Stock Exchange are preparing for a surge in Reiwa-related stocks when the market goes back online on May 7. When the era name Reiwa was announced on April 1, TV commercial production company Ray Corp. saw its shares rise 19% on hopes of new orders pouring in.

Hideo Kumano, executive chief economist at Dai-ichi Life Research Institute, noted in a report that the era change will likely have a lasting impact.

Reiwa-related campaigns will be combined with other events such as the upcoming Rugby World Cup in Tokyo, he said. In October, the government plans to roll out a reward-point rebate program on payments made through credit cards and other cashless methods, with the aim of underpinning domestic demand after a planned sales tax increase.

Kumano also expects ceremonies and historical sites related to the Imperial family to attract more inbound and domestic tourists, so that "the combined effects [of Reiwa and other factors] will have a positive impact on the economy through this autumn."