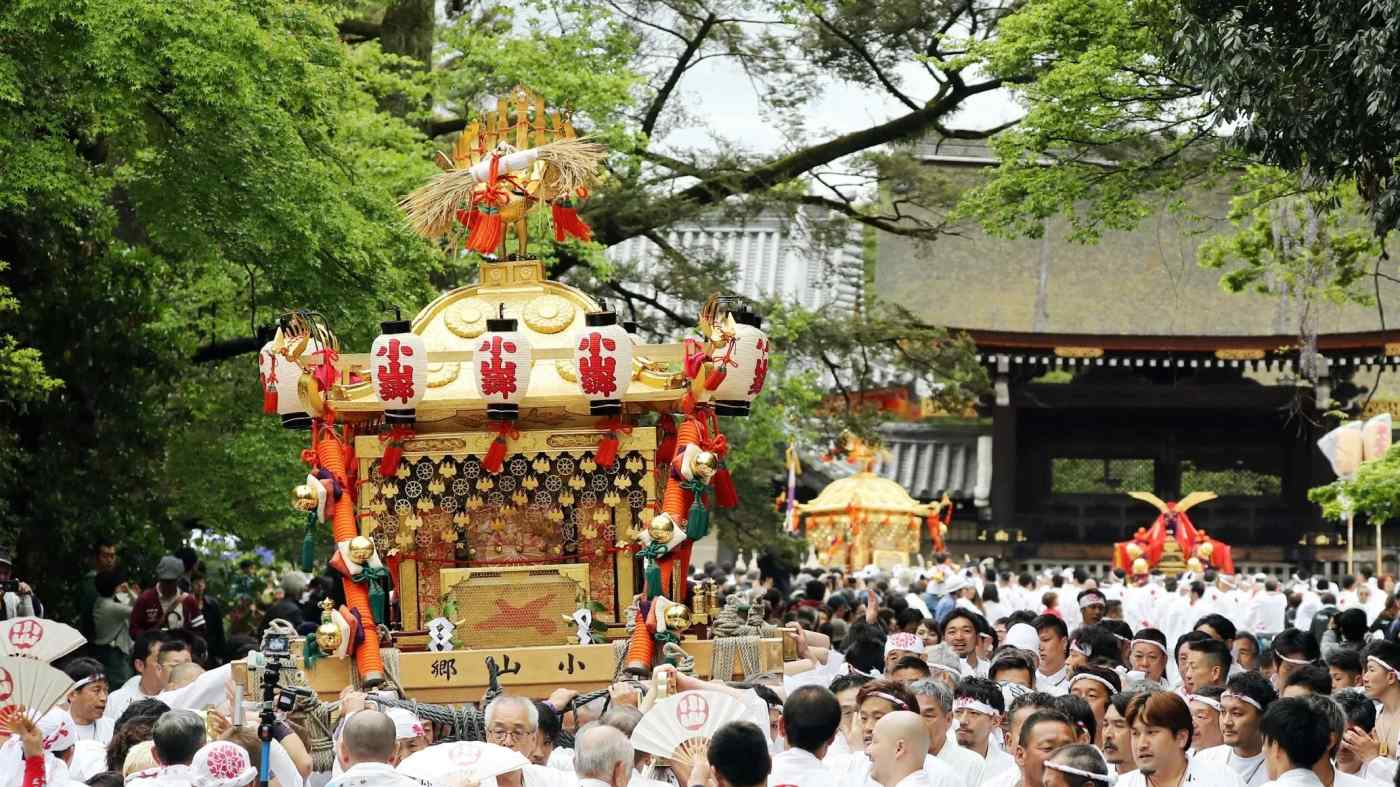 TOKYO -- Huge crowds thronged areas associated with the Imperial household Wednesday to celebrate Emperor Naruhito's ascension to the throne and welcome the dawn of the Reiwa era.

The emperor's enthronement ceremony and celebratory rituals started in the morning at the Imperial Palace, with throngs of people gathered to catch a glimpse of the Imperial family's motorcade.

Emperor Naruhito, 59, left the palace at about 12:30 p.m., smiling through the window of his vehicle as it proceeded slowly through the streets. Members of the foreign press and tourists were among the crowd seeing him off.

After the roads reopened, people headed to Nijubashi, the renowned stone bridge leading into the palace, to take pictures. Some revelers held signs that read "Reiwa."

Among the attendees was a 35-year-old housewife from Saitama, a city outside Tokyo, and her family. Her oldest daughter is 4 years old, the same age she was when Japan welcomed the previous Heisei era. Emperor Emeritus Akihito, 85, abdicated the throne unlike his father, who reigned until his death in 1989. Crowds of people stood outside the grounds of the imperial palace in Tokyo in order to get a glimpse of the new emperor. (Photo by Karina Noka)

"Unlike last time, there is a celebratory mood. I hope my children will remember this, even just a little bit," she said. "I hope [Reiwa] is an era where kids can grow strong in peace."

Emperor Naruhito and Empress Masako then entered the Imperial Palace again by car just before 3 p.m. to attend further celebration rites. The couple opened their window to wave at spectators standing in the rain. As the rain picked up, their daughter Princess Aiko then entered, waving with a grin to a mass of umbrellas.

On Japan’s southwestern Kyushu island, citizens in the of city Daizafu reenacted a 1,300-year-old plum blossom viewing party that inspired the name Reiwa, as described by the "Manyoshu," a famed collection of Japanese classic poetry. About 50 people participated, wearing traditional garments in brilliant colors.

The poem on which Reiwa is based was also read. The name comes from the line: "It is now the choice month of early spring; the weather is fine, the wind is soft."

One participant, a 34-year-old high teacher who played the noble that hosted the gathering in the reenactment, said: "It was splendid. I felt that this was how plum blossom viewings were." 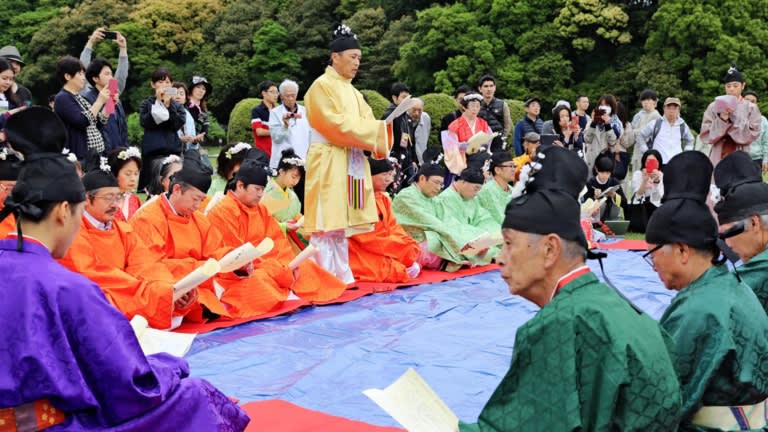 Participants reenact a plum blossom viewing that inspired the the name Reiwa in handmade traditional clothing. (Photo by Shinya Sawai)

The Ise Grand Shrine, in which the Imperial family's ancestral deity, Amaterasu, is enshrined, was also packed with tourists from early morning despite the light rain. The emperor's enthronement was celebrated at the inner shrine, and children passed out 40,000 boxes of red-and-white traditional candies.

"I came to pray on the first day of Reiwa that it will be an era through which my family can live in health," said a 47-year-old man from Aichi Prefecture who began traveling with his family at 2 a.m. to be at the Shinto site.

Tens of thousands of people visited the sacred inner shrine on the first day of Reiwa. The city of Ise expects roughly 550,000 visitors during Japan's 10-day-long holiday.

Portable shrines were carried around Kyoto Gyoen National Garden, home to the former Imperial residence, as part a millennia-long festival by nearby Goryo Shrine, which has deep connections to the Imperial house. About 300 men in traditional white coats carried three 3-meter high shrines around the garden, surrounded by Reiwa banners, as spectators cheered and clapped in rhythm.

"I think seeing a traditional festival on the first day of Reiwa was a good start," said a 60-year-old man from Kobe.

Additional reporting by Hiroshi Asahina in Daizafu, Yuta Shimasaki in Ise, and Keijiro Ohata in Kyoto.