People across the country celebrate with countdowns and special festivals Japanese Emperor Naruhito delivers his first remarks with Empress Masako at the Imperial Palace in Tokyo on May 1. (Pool photo)
Nikkei staff writersMay 1, 2019 00:01 JSTUpdated on May 1, 2019 17:40 JST | Japan
CopyCopied

TOKYO -- Crown Prince Naruhito ascended to Japan's Chrysanthemum Throne at midnight on Wednesday, May 1, marking the beginning of the new Reiwa era.

The new emperor succeeded his father, Akihito, who became the first emperor to abdicate since 1817. Akihito now holds the title of emperor emeritus and has retired from public duties along with his wife, now Empress Emerita Michiko.

Emperor Naruhito took part in an ascension ceremony on Wednesday, receiving the Imperial treasures that are passed down through the family, and speaking about his vision for the new era.

The handover ceremony for the regalia began at 10:30 a.m. at the Imperial Palace, and was attended by 26 dignitaries representing the Japanese people, including Prime Minister Shinzo Abe. The new emperor entered the room followed by his aides, as well as his brother, Crown Prince Akishino, and his uncle, Prince Hitachi.

Staff then carried in a sword and a jewel -- two of Japan's "Three Sacred Treasures" -- and two seals, which they set on a platform in front of the emperor before bowing deeply.

Emperor Naruhito, in a separate ceremony, delivered his first remarks after his accession in front of about 300 guests, including representatives from local governments across Japan.

He thanked his father for being a model as emperor, and pledged to "always think of the people and work on improving myself, to be by the people and comply with the constitution to fulfill my mission as the symbol of the nation and the unity of the Japanese people."

He also expressed his hope for "the happiness of the people, a more prosperous nation and world peace."

The emperor is defined as the symbol of the nation and unity of the Japanese people in the constitution.

He was accompanied by his wife, Empress Masako, as well as Crown Prince Akishino and other adult members of the Imperial family. Abe then congratulated the new emperor on behalf of the Japanese people.

Shortly before the events, Emperor Naruhito completed his first public duty in the role by stamping his seal of approval on a cabinet decision to hold the two ceremonies as affairs of state.

Official events continued throughout the day. The emperor also signed documents on Wednesday for the appointment of his top aide and the top aide to his parents, now Emperor Emeritus Akihito and Empress Emerita Michiko, and saw the officials sworn in.

He and Empress Masako then returned to their residence in the Akasaka Estate before visiting the retired couple and reporting his accession. Afterward, they returned to the Imperial Palace and received felicitations from members and former members of the Imperial family and staffers from the Imperial Household Agency.

The sword and jewel will be taken to the Akasaka Estate and remain there.

When Akihito ascended to the throne in January 1989 he said that he "wanted to work with the people to protect the constitution and fulfill duties accordingly." True to his word, he actively interacted with the public during his reign, known as Heisei.

A separate ceremony to celebrate Emperor Naruhito's accession is planned for October. It will be attended by dignitaries from around the world. 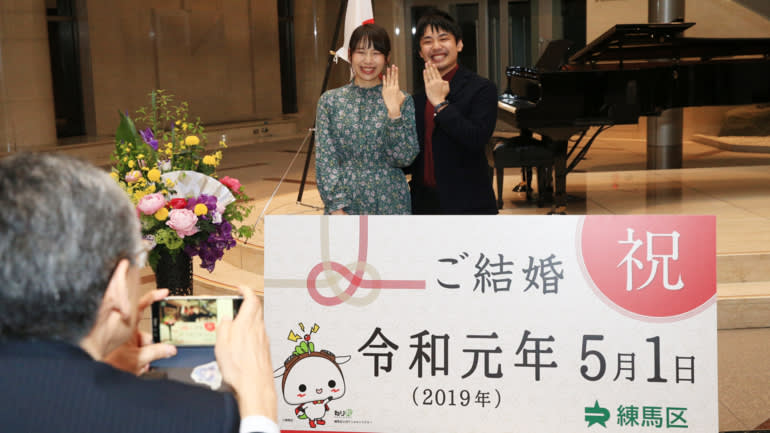 A newly‐married couple poses after submitting their marriage certificate to the city office in Nerima ward, Tokyo, at midnight on May 1. (Photo by Taro Yokosawa)

Crown Prince Akishino, the emperor's younger brother, is now first in line for the throne. He is followed by his son, Prince Hisahito; and his uncle, Prince Hitachi. Under the special one-time law that allowed his abdication, the former emperor cannot retake the throne.

The name "Reiwa" was taken from the Manyoshu, the oldest existing anthology of Japanese poetry, which used language describing plum blossoms in the spring.

The new era's name signifies the culture born when people bring their hearts together in a beautiful manner, Prime Minister Shinzo Abe has said.

Across Tokyo, people gathered on Tuesday to count down the last seconds of the Heisei era. At the Tokyo Skytree, about 1,900 people welcomed the new era at the observatory some 350 meters above the ground. When the countdown ended, "Reiwa" was displayed in giant letters across the windows.

On the other side of town, young people swarmed at Shibuya crossing, heedless of the rain. They repeatedly shouted, "Reiwa" and exchanged high-fives as the new era turned.

"I thought it would definitely be lively," said one 18-year-old student came to the capital with his friends from Gunma prefecture. "It was a lot of fun to ring in the new era with everyone."