Japanese emperor to abdicate after 3 decades on throne 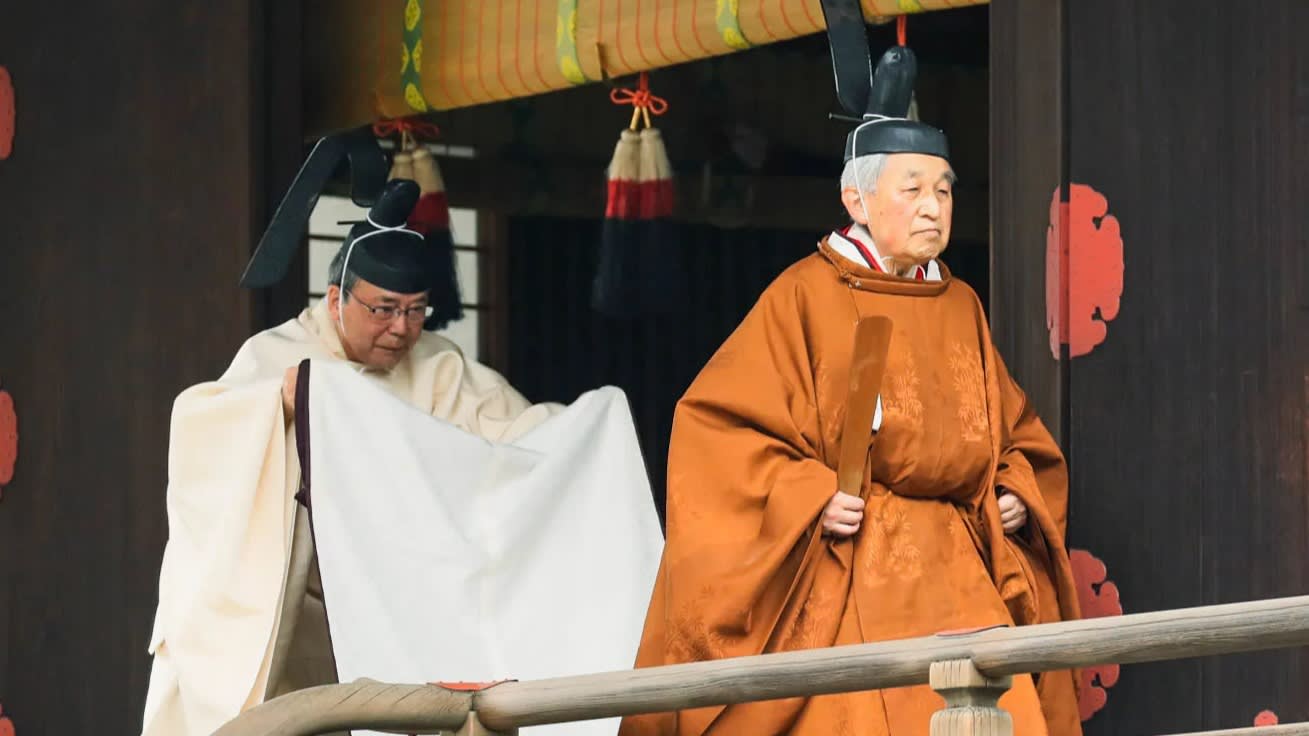 TOKYO -- Japan's Emperor Akihito will step down Tuesday after 30 years and four months on the throne, bringing the Heisei era to a close with the first abdication since constitutional rule was adopted in the 19th century.

The emperor is holding a day of abdication rites Tuesday from morning until late afternoon, after which he will address the nation for a final time.

The outgoing emperor began with two court rituals declaring his abdication on the Imperial Palace grounds in the heart of Tokyo. The solemn ceremonies took place with Crown Prince Naruhito and Prince Akishino in attendance, while Empress Michiko waited inside the Imperial Palace for health reasons.

After paying his respects inside the central Imperial Sanctuary -- where the Imperial family's divine ancestor, sun-goddess Amaterasu, is enshrined -- the emperor then read an announcement stating his intention to perform the abdication rites. The same declaration was read at the two other sanctuaries for Imperial ancestors and for various deities.

The final rite, the abdication ceremony, starts at 5 p.m. in the Imperial Palace's most formal space: the "Matsu no Ma," or State Room. The 300-plus guests will include the crown prince and his wife, other members of the Imperial family, and representatives from the central government's three branches and local governments.

The emperor and empress will enter the hall with Imperial chamberlains carrying two of the "Three Sacred Treasures," a sword, mirror, and jewel, passed down through the Imperial family. Prime Minister Shinzo Abe will then speak on behalf of the nation before the emperor's remarks.

The whole ceremony will take just 10 minutes or so. The emperor is expected to only offer his thanks to the people without touching on the topic of Imperial succession.

Emperor Akihito will not touch the sacred treasures during the ceremony to ensure that his abdication cannot be taken as a personal wish, given the constitution's ban on Imperial involvement in politics.

The ceremonies related to Emperor Akihito's abdication began in March, when the date of his retirement was announced to the central sanctuary. The emperor and empress then visited the mausoleum of Emperor Jimmu, Japan's legendary first emperor, and Ise Shrine, the nation's holiest Shinto site. The monarchs completed their duties Saturday and have spent the last few days resting at their residence in preparation for the abdication.

Neither the constitution nor the Imperial Household Law offers guidance on the abdication of a living emperor. The law designates only the emperor's death as the condition for succession.

To accommodate Emperor Akihito, parliament in June 2017 passed a one-time measure letting him step down for personal reasons, taking into account the difficulty of continuing with his duties. He will withdraw from all public duties and not be able to reclaim the throne.

But the one-time abdication exposes other problems for the Imperial household. Emperor Akihito ascended to the throne at 55 upon the death of his father, Emperor Hirohito. Similar issues regarding abdication may arise in the future, given that the crown prince and Prince Akishino are of similar age.

The Imperial household also faces a loss of members, since princesses who marry commoners must give up their royal title by law. Of the Imperial family members with public duties, there are three unmarried princesses in their 30s, two in their 20s and one in her teens. Prince Hisahito is the sole younger male heir.