Voters cast their ballots at a polling station in Tokyo on Oct. 22.   © Kyodo
Japan's Election

TOKYO -- Prime Minister Shinzo Abe was seen as likely to win a fresh mandate in Sunday's snap election, with a divided opposition and heavy rain helping the incumbent.

A Nikkei poll conducted Tuesday through Thursday suggests Abe's conservative Liberal Democratic Party could win 262 of the 465 seats in Japan's lower house of the Diet.

Typhoon Lan was dumping heavy rain across much of Japan during election day, something political analysts say is likely to depress turnout. Voting ends at 8 p.m., with exit polling data expected shortly afterward. Official results are due by Monday morning.

The stakes are high: Japan's leader will have to grapple with an escalating missile and nuclear threat from nearby North Korea, along with an economy that is still not firing on all cylinders.

Abe, 63, has already won four elections as LDP leader, although typically with low turnouts and only around 25% of the popular vote. In this election, he has campaigned on the achievements of his "Abenomics" policies to revive the economy after two decades of stagnation. Japan's GDP has risen about 10% since he came to power in 2012, aided by a huge quantitative easing program from the Bank of Japan. Opposition leaders have argued that the general public is not feeling the benefits of the growth.

Initially, the election looked to be a duel between the prime minister and popular Tokyo Gov. Yuriko Koike, who established a new national party to challenge the dominance of Abe's LDP and its junior coalition partner Komeito. Koike's Kibo no To, or Party of Hope, absorbed a large number of candidates from the Democratic Party -- hitherto the largest opposition force.

But the conservative Koike refused to endorse the Democratic Party's more liberal members, prompting a split and the creation in early October of another new group: the left-leaning Constitutional Democratic Party, led by veteran opposition politician and former cabinet minister Yukio Edano.

The rift appears to have dashed Koike's hopes of unseating the LDP, while the Tokyo governor's decision not to run for the lower house left her party bereft of an obvious leader. 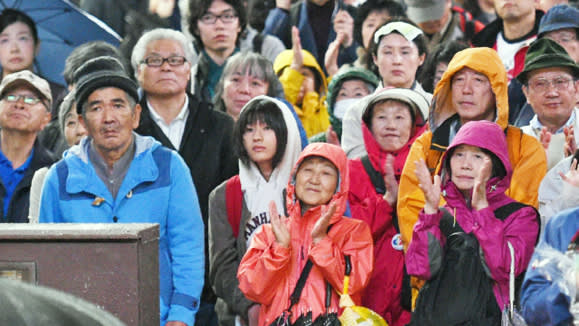 People listen to a candidate at a campaign rally in Tokyo on Oct. 21. (Photo by Tomoki Mera)

The Party of Hope was lagging behind even in the Tokyo constituencies that propelled Koike to the governorship last year. The Nikkei poll projects only 55 seats for her party -- just one more than the 54 projected for the Constitutional Democrats, who have been gaining ground during the campaign.

Early on, Abe had set a 233-seat goal for the LDP-led coalition. A fresh endorsement from the public would allow him to move ahead with key policies, including a consumption tax increase to 10% in October 2019, from 8%, as well as a reform of Japan's pacifist post-war constitution.

The Nikkei poll also sees the ruling bloc taking around 300 seats, giving Abe and his cabinet a decisive handle on Diet affairs, though short of the two-thirds majority of 310 required for constitutional change. A party or coalition can chair every standing committee in the lower house with 244 seats and hold a majority on all of those bodies with 261.

Abe has long cherished the idea of changing the constitution to put the country's armed forces on an official footing, but the idea remains highly divisive in a society that recalls the devastation wrought on Japan by World War II.

This is the first lower house election since Japan's voting age was lowered to 18, from 20, last year. As of Oct. 15, some 4.1 million people -- 3.86% of eligible voters -- had cast ballots at early voting stations, according to the Ministry of Internal Affairs and Communications.