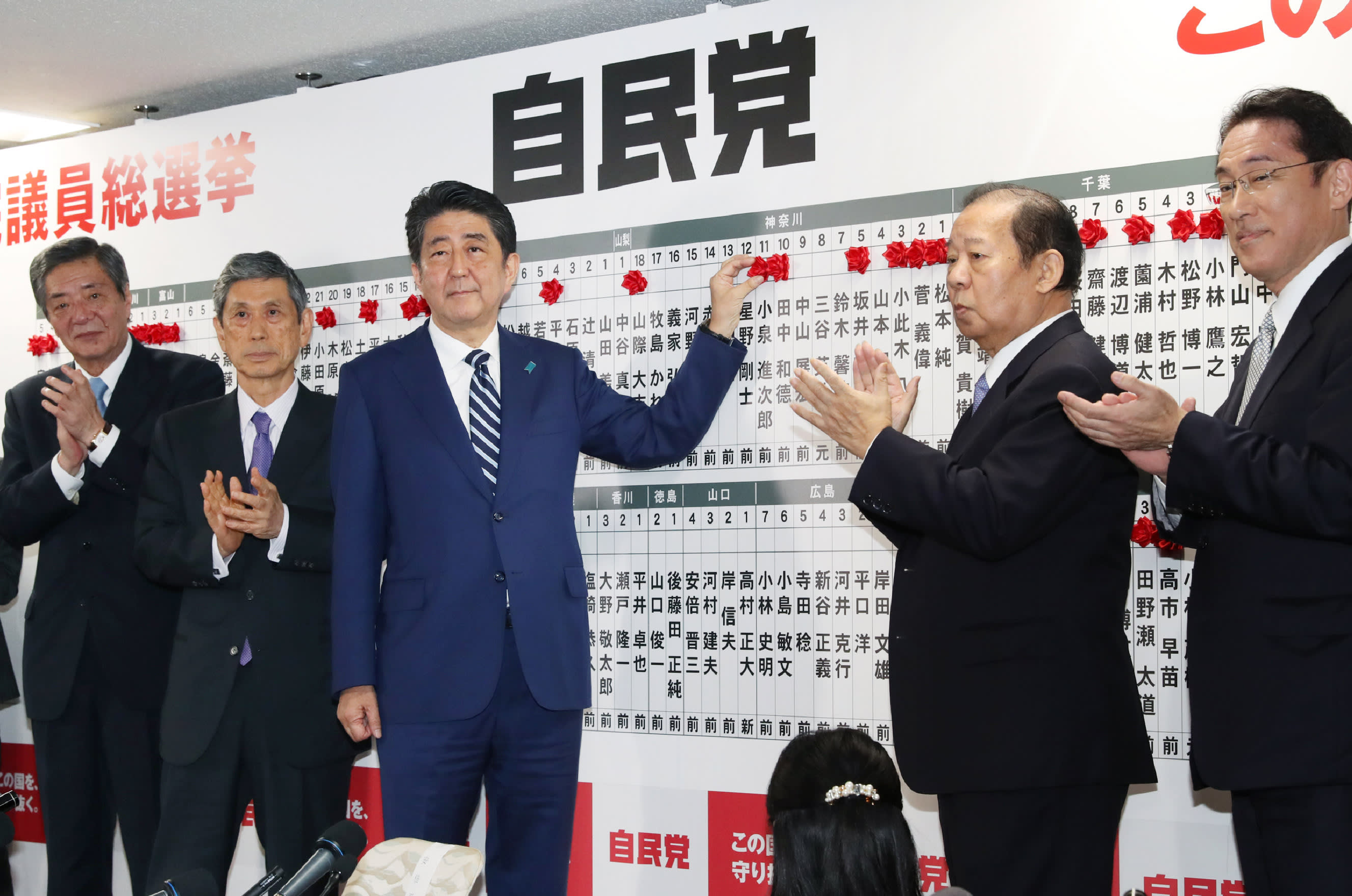 TOKYO -- Despite being born into Japan's political royalty, Shinzo Abe, 63, is a man of drive and determination.

That may not be so surprising. Perhaps he needs to live up to the legacy of his father Shintaro, a former foreign minister, or that of his grandfather Nobusuke Kishi, a former prime minister. The fact that he is the second son in the family but was not such a strong academic achiever as his two brothers also made him feel a need to prove himself, experts say.

That drive has earned Abe the nickname of "comeback kid," a moniker which seems particularly appropriate after exit polls predicted his victory in Sunday's Japanese parliamentary election, setting him on track to become Japan's longest-serving prime minister since World War II.

Abe's initial stint as prime minister was far less auspicious. He first won the job in 2006 at the age of 52, the youngest leader in post-war Japan, only to make a humiliating exit from office a year later amid a series of cabinet resignations, a major loss in upper house elections, and the onset of a bowel disease.

But Abe was determined to try again. He ran for the leadership of the Liberal Democratic Party again in 2012 and went on to become prime minister for the second time in December of that year.

By this summer, his administration was again in turmoil, with a ministerial resignation and a series of damaging allegations swirling about favors provided to school operators close to Abe. His approval rating plunged to the 30% range in July, down from above 60% in January. Critics described him as a lame duck with little chance of re-election. But on Sunday, he took his party to another big win -- its fifth straight victory in national elections -- and cemented his chances of re-election for a third, three-year term as LDP party leader in a convention scheduled for next year, potentially keeping him in office until 2021.

"Abe wants to leave his name in history by achieving something as grand as his grandfather did," said Tadaoki Nogami, a former journalist and author of three books on Abe.

Abe's grandfather Kishi is remembered in Japan as the prime minister who revised the U.S.-Japan security pact into one of more equal partnership in 1960. Prior to the revision, the U.S. was allowed to use facilities in Japan, but was not obliged to defend the country. Kishi successfully got the treaty through a contentious parliamentary battle, but it so damaged him politically that he stepped down a month later.

Abe was five years old at the time, but has said he still recalls the sound of violent clashes between police and protesters outside parliament as he played on his grandfather's lap.

Abe followed Kishi's footsteps as a reformer of the country's security arrangements and in 2015 passed legislation allowing Japan to fight alongside its allies even if Japan itself was not under attack. Legalizing the right of collective self-defense has enabled Japan to contribute equally to the security partnership with the U.S.

Now in his fifth year in office, constitutional revision has emerged as Abe's top priority. It could make him the first prime minister to amend Japan's U.S.-drafted pacifist postwar constitution but he would need a two-thirds majority in parliament, something which Sunday's election may not deliver.

"In our generation, we need to establish the constitutional standing of the Self-Defense Forces so that there is no room for debate on whether or not they stand outside the constitution," Abe said in May. The constitution forbids Japan from maintaining armed forces and from using force to settle international disputes.

Abe wants to fast-track legal procedures in order to have the revised constitution in place by 2020, meaning that a national referendum would be held as early as 2018 or 2019. As well as a two-thirds majority in parliament, he would also need to win a national referendum on the issue, something which opinion polls suggest could be a struggle.

For old conservatives, the current constitution is a legacy of the U.S. occupation that has deprived Japan of national pride and has weakened its traditions, but for many Japanese who remember vividly the horrors of World War II and the destruction it wrought on their country, the pacifist charter is a cherished document not to be touched.

Abe has kept his ambition to revise the constitution under wraps for much of the last five years. Instead, he has demonstrated his pragmatist side, focusing on economic policies that are popular with the public.

He introduced a series of policy programs, known as Abenomics, aimed at boosting the economy through a massive dose of monetary and fiscal stimulus to pull it out of two decades of stagnation. He postponed a tax increase unpopular with the public twice, in 2015 and this year, though he now intends to implement the rise in 2019. Since 2015, he has aimed for more inclusive growth by promising to build more childcare facilities, increase the number of caregivers and nursery school teachers, and raise wages for workers.

This year, he is pushing this initiative further, aiming to achieve "equal pay for equal work" so that wage gaps will be reduced between regular and non-regular workers. By incorporating these 'progressive' policies, he has kept voters happy and the opposition short of reasons to attack the government.

His pragmatism was also on display when he rushed to New York in November for a meeting with Donald Trump before he assumed the presidency -- a move that irked the Obama administration.

But the move made him the first world leader to meet with Trump since his election and helped set a cordial tone in bilateral relations, at a time when Trump's protectionist rhetoric had raised concern about a new round of bilateral trade frictions. 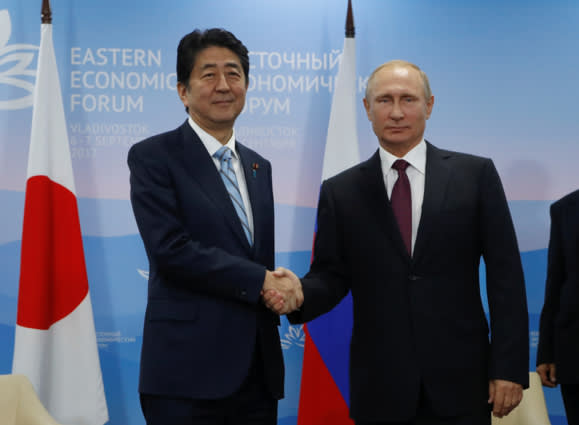 Economics, however, is not where Abe's heart is.

In an attempt to achieve a grand legacy, Abe entered negotiations with Russian president Vladimir Putin, in the hope of settling a long-running territorial dispute over Japan's Northern Territories, occupied by the Soviet Union after Japan surrendered in World War II. Russia now regards the Kuril islands as an integral part of its territory and the dispute has prevented the two nations from concluding a peace treaty.

Abe and Putin have met for direct talks for as many as 19 times so far, but a breakthrough has remained elusive -- even when they met in Abe's home town in Yamaguchi last December for one-on-one talks.

Despite his willingness to run for a third term as party leader, Abe is battling illness. Last year, Hiroshige Seko, a close Abe confidante and currently trade minister, said that Abe is still suffering from bowel disease, only keeping it under control with medicine.

With diminishing hopes of a diplomatic breakthrough with Russia, Abe is inevitably turning to a revision of the constitution as his true political legacy.

"Constitutional revision is once again likely to dominate the public agenda in 2018," said Tobias Harris, an analyst at Teneo Intelligence.