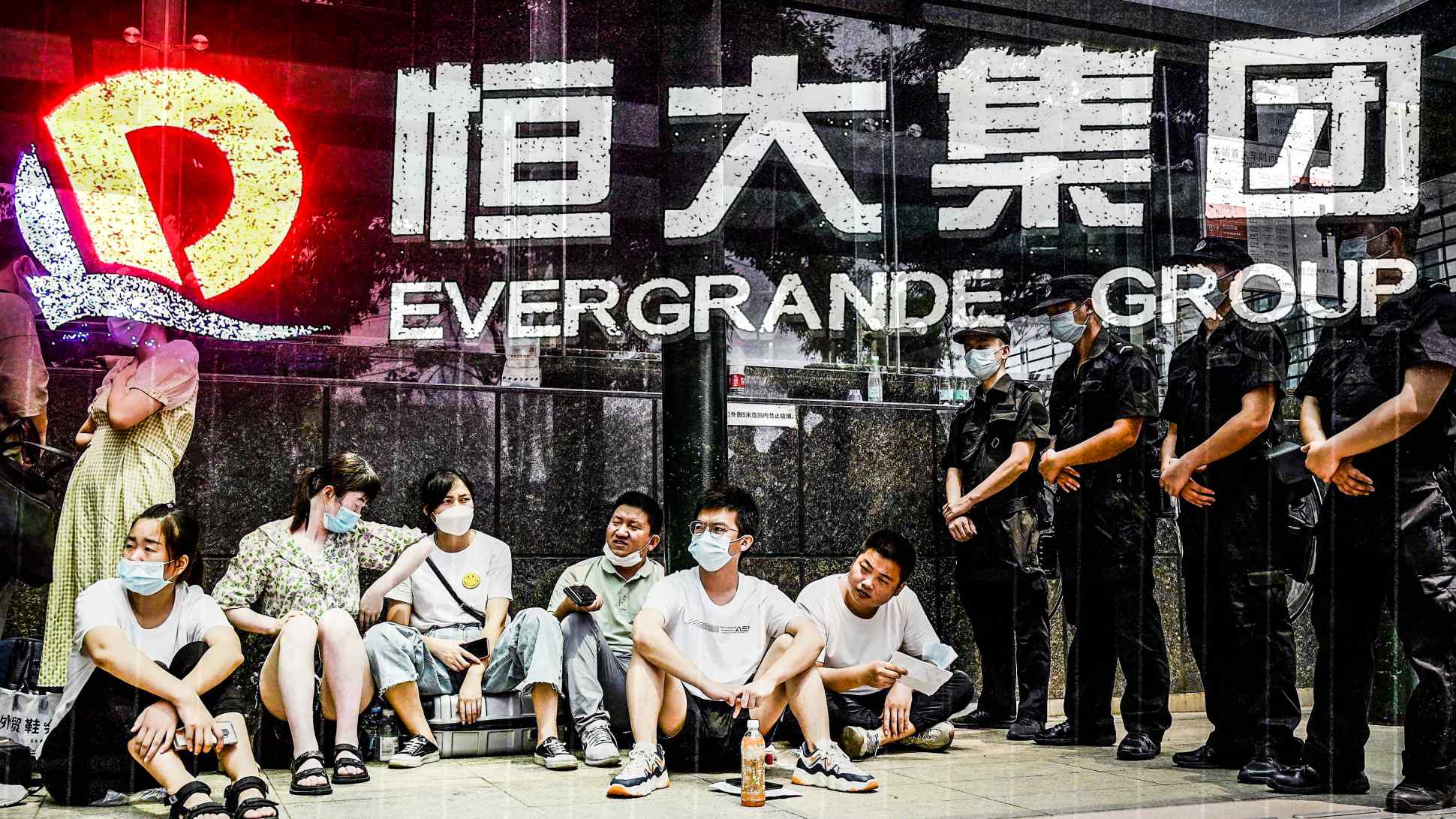 Investors gather at Evergrande's headquarters in the southern Chinese city of Shenzhen to demand their money back. (Source photos by AFP/Jiji)
Market Spotlight

HONG KONG -- The intensifying crisis at China Evergrande Group, the world's most indebted property developer, is causing tremors across Chinese markets and stoking fears that there could be damaging consequences for the nation's financial system.

International investors are no longer just shunning Evergrande's bombed-out bonds. Debt issued by other stretched developers has also slumped. Banks with exposure to the Chinese property sector are coming under scrutiny.

And with angry creditors descending on Evergrande's headquarters, and unpaid contractors downing tools at its building sites across the country, the debacle is also attracting public attention.

The question for investors -- and for the Chinese authorities -- is whether the problem will start to feed on itself or contagion can be avoided.

On Monday, Evergrande's shares slumped a further 17% in the morning session in Hong Kong, taking losses for the year to 86%. The company's travails sparked a sell-off in property stocks listed in the city, with the Hang Seng Property Index tumbling 6.6% to its lowest level since 2016 and the broader Hang Seng Index declining 3.9% at one point. Markets in mainland China were closed for a holiday.

"Given the relevance of real estate in China, better corporate health after the pandemic will not be enough stop the surge in credit risk," said Alicia Garcia Herrero, chief economist for the Asia-Pacific at Natixis. "Contagion from Evergrande to other developers will become more visible across private and high-yield debtors. Banks with higher property exposure may also be singled out with wider bond spreads." 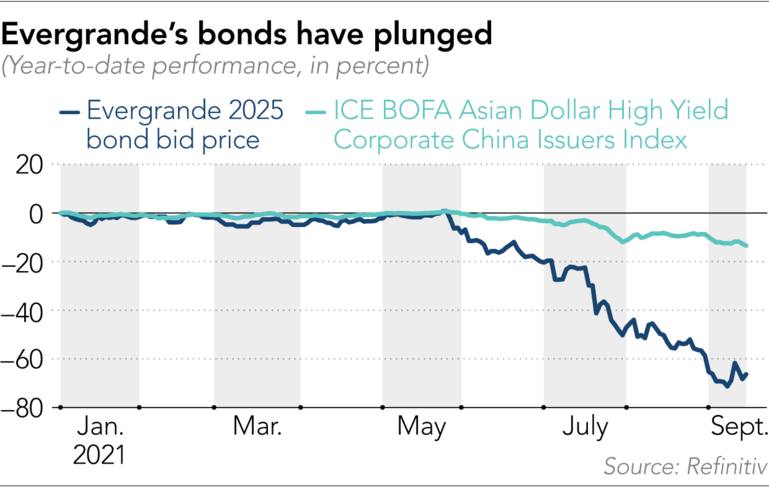 The real estate sector has for years been the backbone of growth for the world's second-largest economy. Real estate investment has averaged 13.5% of gross domestic product for the past five years, according to Fitch estimates, three times the level in the U.S. economy. Adding in construction and allied sectors, the number doubles, according to a study published by the Massachusetts-based National Bureau of Economic Research in August last year.

China's President Xi Jinping is trying to temper the nation's obsession with property and has said "housing is for living, not for speculation." In recent months authorities have targeted everything from mortgage approvals and banks' exposure to housing, to rental growth and land prices, to gain more control over the market. They have also imposed strict guidelines on real estate company leverage under the "Three Red Lines" policy, with those breaching limits barred from borrowing more.

Nonperforming loans to the real estate sector surged 30% across the five largest banks to 97 billion yuan ($15 billion) in the first six months of the year, according to filings.

Real estate companies made up around 30% of the first half's bond defaults. Banks and prime brokers are no longer accepting as collateral debt issued by some highly indebted developers.

Chinese regulators have already warned of the broader risks to the country's financial system if Evergrande's $305 billion of liabilities are not contained, and told it to urgently cut its debt. The company owes money to more than 128 banks and about 121 nonbanking institutions, according to the contents of a leaked letter written by Evergrande to the government late last year.

Matters are coming to a head. Last week, disgruntled retail investors who bought the company's wealth-management products descended on Evergrande's Shenzhen headquarters demanding their money, after being offered only staggered repayments. Evergrande's offshore bonds now trade at less than 30 cents on the dollar, indicating an expected default. Bloomberg reported the Ministry of Housing and Urban-Rural Development has told banks that Evergrande won't be able to pay debt obligations due on Sept. 20. The company also faces 15 bond coupon payments before the end of the year, starting Sept. 23.

The company has retained Houlihan Lokey and Admiralty Harbour Capital as financial advisers to assess its capital structure and explore solutions to the liquidity crunch, warning that failure to roll over payments "may lead to cross-default under the group's existing financing arrangements." A woman rides past an unfinished Evergrande housing complex. Nonpayment to suppliers has led to suspension of work at some projects.   © AFP/Jiji

Across the sector, higher borrowing costs for an extended period could weigh on leveraged Chinese companies and ultimately lead to a rise in defaults across the banking and wealth-management sector.

Bonds issued by another heavily indebted property developer, Guangzhou R&F, are being quoted at 58% of their face value, compared with 72% at the start of the month. Moody's downgraded the group's credit rating this month and warned that it may have difficulty refinancing its debt. Bonds from Shenzhen-based Fantasia Group, another developer facing refinancing concerns, traded at 56 cents on the dollar.

Volatility in both the domestic and U.S.-dollar bond markets will exacerbate some developers' refinancing difficulties, S&P Global ratings said in a note. It estimates the developers it rates face 480 billion yuan of domestic and offshore bond maturities within one year, equivalent to 22% of their unrestricted cash level, as of June 2021.

"When refinancing becomes unfeasible, developers will have to pay down the maturities in cash, taking away resources for land and even construction," it said.

Credit spreads on Chinese issuers' onshore debt have not so far widened like those for offshore junk bonds. Analysts and investors whom Nikkei Asia spoke to still believe the government will intervene before Evergrande or its smaller peers cause a systemic shock. They also point out that banks hold enough of a buffer to avoid full-blown credit crisis. A People's Bank of China sensitivity test released earlier this month indicated that if the bad loan ratio for property-development loans were to rise by 15 percentage points, and that for mortgages by 10 points, the average capital adequacy ratio of the 4,015 banks assessed would only drop from 14.4% to 12.3% -- still above the regulatory minimum of 10.5% to 11.5%.

As a result, notes issued by larger developers with stronger balance sheets, such as Sunac China Holdings, China Vanke and Country Garden Holdings, have held up so far, though equity values have slumped by between 17% and 26% in the past month. Bonds issued by China Minsheng Bank, which has the biggest exposure to Evergrande, fell below par briefly this month but quickly regained their value.

Yet a property sector default could still have wide consequences. It could damage consumer confidence if people were to lose deposits for homes that have not yet been completed, or if it crippled suppliers and contractors who are big employers. This, in turn, could exacerbate defaults across the banking sector.

China's economy stuttered in August, hurt by pandemic measures and the curbs on property lending. Retail sales growth last month slowed to 2.5% from a year ago, and home sales by value slumped 20%, the biggest decline since early last year, when the onset of the pandemic prompted a lockdown.

Construction investment, meanwhile, contracted 3.2% in the first eight months of the year.

"If Evergrande's troubles drag on for a long period, it will erode confidence of homebuyers and investors, as they try to see who will be next," said Michelle Lam, greater China economist at Societe Generale. "While our central case scenario does not project any financial system risk, the entire Evergrande episode might hurt the economy and the wider property sector unless the government relaxes real estate deleveraging rules."