TOKYO -- Asian stock markets are sharply underperforming the rest of the world in the third quarter, as global investors retreat from the region in the face of worsening COVID-19 case numbers and new lockdowns.

Fund managers and strategists say the outlook for the remainder of the year depends on vaccinations progressing -- but even then the region may struggle to attract inflows as the U.S. tightens monetary policy to the detriment of other markets and China continues a regulatory crackdown on its largest companies.

Japan's Nikkei Stock Average has declined over 6% since the end of June, last week touching its lowest level this year. South Korea's Kospi is down 7% and the Philippines' PSE index has fallen close to 4%. The MSCI All Country Asia has dropped over 8% after more sharp selling in many markets last week.

The MSCI USA and MSCI Euro remain firmly in positive territory more than midway through the third quarter.

"COVID is causing an outflow of investment money from Asia," said Kota Hirayama, a senior emerging market economist at SMBC Nikko Securities in Tokyo. "This is particularly true for Southeast Asia due to its low vaccination rates." While governments are rushing to vaccinate their populations, the immediate response to the rapid spread of the delta variant has been to put in place lockdowns or states of emergency, with potentially big repercussions for economies.

Japan, which set a record for daily infections last week, extended a state of emergency covering Tokyo and five other areas into September while also expanding the decree to seven more prefectures. This is the second extension for the capital, which has been under emergency restrictions since July 12. As a result, Mizuho Securities upped its estimate of the economic impact to about 1 trillion yen ($9.1 billion).

Meanwhile, China is experiencing its biggest resurgence of coronavirus cases since January. Beijing has classified more than a dozen areas as high risk and restricted intercity travel while applying strict quarantine and mass testing whenever there is an outbreak. Retail sales and industrial output in July came in lower than expected, raising investor concerns not just about the Chinese economy but about the outlook for linked economies throughout the region.

Masamitsu Ohki, chief portfolio manager at Fivestar Asset Management in Tokyo, said that his market outlook has changed compared to the beginning of the year. "The stock market has been overwhelmed by negative factors including COVID resurgence and China's crackdown. Since around June there have been many risk factors, which has made it stressful to trade."

Investors are retreating from currency markets as well as equities. On Aug. 10, the Thai baht fell to its lowest level against the U.S. dollar in more than three years. With the kingdom's daily reported COVID-19 cases quadrupling since late June, the prospects for tourism look dismal, adversely affecting the country's current account balance.

The government has extended lockdown measures and a nighttime curfew until the end of this month, despite Prime Minister Prayuth Chan-ocha's plan to reopen the country for vaccinated foreign visitors in October. 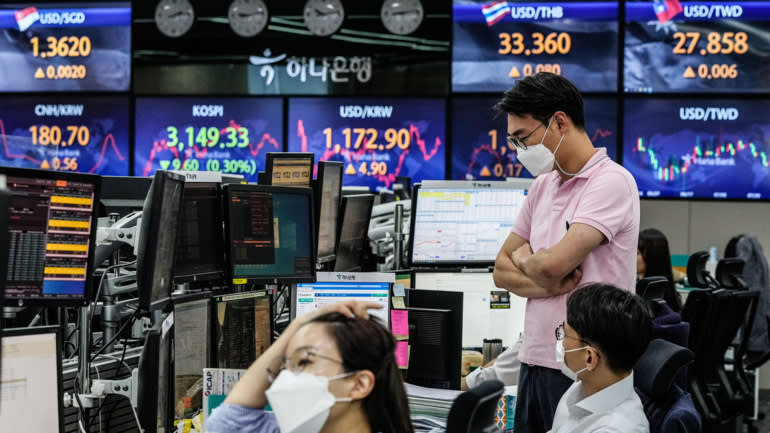 Macro hedge fund managers who had piled into the country without hedging their currency risk, expecting to enjoy a double boost from higher stock prices and baht appreciation, instead suffered a double blow from falling equity markets and currency depreciation.

"The outbreaks rattled those funds' strategy to double down on tourism reopening," said a strategist at a Thai mutual fund.

The rush to wind down positions has contributed to Thailand's benchmark SET index falling roughly 2% since the end of June.

Only around 8% of Thailand's population has received two doses of a vaccine.

The South Korean won has also weakened against the U.S. dollar, declining to nearly a one-year low. The Philippine peso has depreciated close to 5% over the past two months. Manila has been under lockdown since earlier this month, and the government has extended a ban on travelers from 10 countries, including India, prompting a cut in its economic growth forecast for 2021 to 4% to 5% from the previous 6% to 7%. 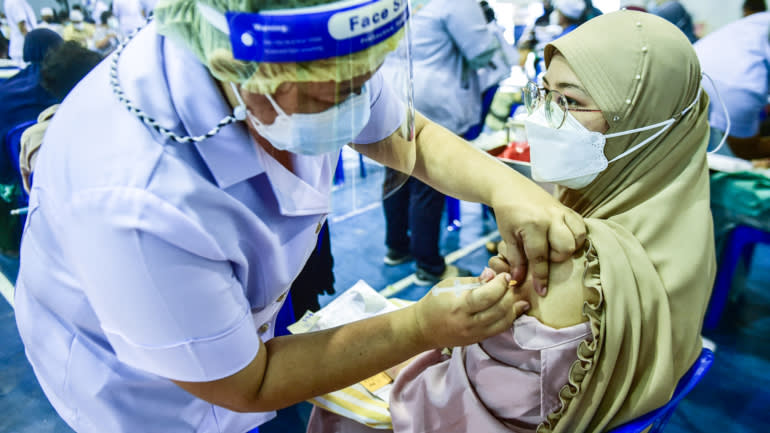 Only around 8% of Thailand's population has received two doses of a vaccine.   © AFP/Jiji

The Philippines' vaccination rate stands at about 12%.

Most market strategists are not predicting large equity market corrections. Rather, they suggest Asian stocks will enter a dull period while investors nervously follow vaccination, infection and hospitalization rates -- the same metrics governments are using to decide when to ease lockdowns.

Given how the delta variant has affected even those who have been fully vaccinated, "an important gauge today would be the hospitalization rate," said Frank Benzimra, head of Asia equity strategy at Societe Generale in Hong Kong. "Asia markets will likely continue to be sluggish and sideways."

SMBC's Hirayama noted that the current rise in infections in many Asian countries began around the same time the U.S. Federal Reserve started signaling a shift away from its ultraloose monetary policy.

In June, the Fed said its officials were expecting the first post-pandemic interest rate increase in 2023, earlier than previously forecast, and it has also begun to consider tapering bond purchases. The prospect of a tighter U.S. monetary policy has boosted the dollar to its highest level of the year, exacerbating the flow of money from emerging economies back to the U.S. and increasing the burden of dollar-denominated debts in Asia.

"Concerns over U.S. tapering, combined with COVID, have given investors a reason to reduce their risk exposure in emerging Asia markets," Hirayama said. 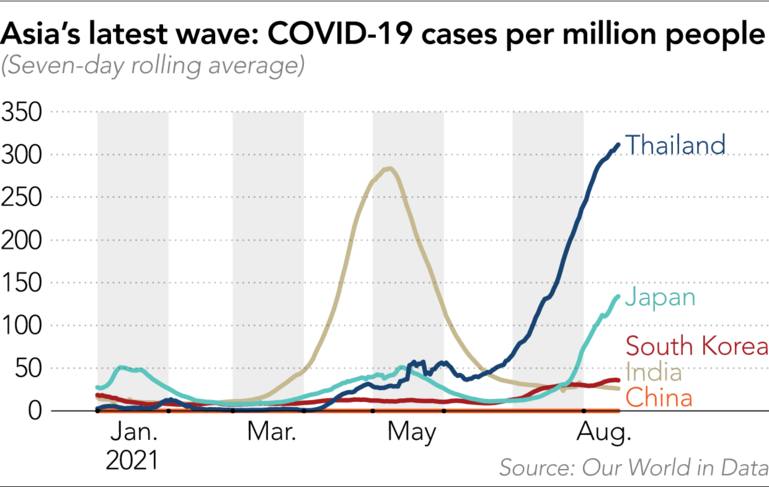 The CSI 300 index, which tracks the largest listed shares in Shanghai and Shenzhen, has tumbled close to 9% since the end of June, while the Hang Seng Index is down nearly 14%, further dragging down all-Asia benchmarks.

For most of the rest of the continent, market sentiment continues to closely track the pandemic.

COVID infections and hospitalizations in India, which faced a deadly second wave through April and May, have since fallen sharply, and the country's stock market has made a swift recovery. Its Sensex index has risen 5% since the end of June, while the blue-chip Nifty 50 index has hit a record high. The stock market in Indonesia, where cases have been falling since last month, has traded sideways so far in the third quarter.

"The stringency in lockdown measures are inversely correlated with market performance, especially stocks sensitive to domestic demand," Garner said. With Asia and emerging markets generally lagging behind the West in vaccinations, "it won't be until the end of the fourth quarter, at the earliest, that Asia breaks out of this cycle."