Gold-backed ETFs needed only the first 10 months of this year to set a record for the amount of gold added to their portfolios in one year, taking in more than 1,000 tons.   © Reuters
Market Spotlight

Gold loses shine as investors get a shot of vaccine optimism

TOKYO -- The vaccines now offering the world potential exits from the yearlong coronavirus pandemic are having bearish effects on the gold market.

The pandemic lifted gold prices, which began the year trading at $1,528. The current benchmark price still represents a 17% gain this year.

"The upward trend of gold prices earlier this year was largely due to the inflow of funds to gold-backed exchange-traded funds," said Masayo Kondo, president of Tokyo's Commodity Intelligence.

According to the World Gold Council, Gold-backed ETFs through November this year added more than 900 tons to their portfolios, the most ever for a single year, surpassing the record 646 tons they added in all of 2009, during the Wall Street-triggered financial crisis. Globally, ETFs now hold 3,793 tons of the metal, also a record. 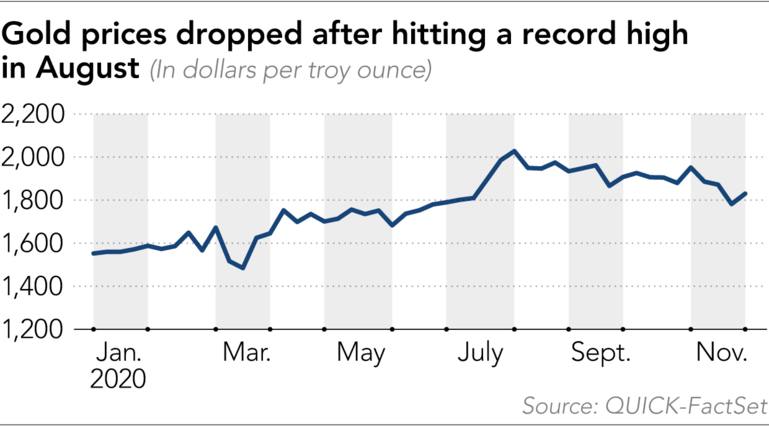 Demand in India and China, the world's two largest physical gold buyers, has remained weak as the pandemic, subsequent lockdowns and restrictions have made it difficult for couples to hold weddings. Other kinds of social celebrations have also been shelved.

But as investors began warming up to risks again, they also started exiting their gold havens. Indian and Chinese demand for gold jewelry is expected to recover now that couples are starting to reschedule long-delayed weddings.   © Reuters

Miyoko Nakashima, a market strategist at Mizuho Securities, said U.S. President-elect Joe Biden's tax increase plans and $7 trillion in economic stimulus measures will be a tailwind for the economy.

In addition, Biden has picked former Federal Reserve Chair Janet Yellen as his nominee to be Treasury secretary -- an appointment widely seen as bringing the government and Fed, or fiscal and monetary policy, closer together, easing the path for major economic measures to move forward.

"Donald Trump will no longer be able to stir things up," Nakashima said, "and this reduced uncertainty will be good for the economy."

Despite optimism for a post-COVID economic bounce, one that could send gold prices into a slump, some analysts remain bullish on the malleable metal.

Goldman Sachs on Nov. 13 noted in a report that the structural bull market for gold "is not over and will resume next year," maintaining its 2021 gold price target of $2,300 an ounce.

The weak dollar is behind the bullish view. Goldman Sachs expects the dollar next year to drop 6% on a trade-weighted basis. As of Dec. 10, the U.S. Dollar Index, which measures the greenback's value against a basket of other currencies, shows the American unit at around 91, compared to 102 in March.

Gold is often inversely correlated to the dollar as there is a tendency to hold it as an alternative asset. Thus, many market observers predict gold prices will hover at their current high level as long as the dollar remains weak. Low interest rates in the U.S. also reduce the opportunity cost of holding assets in gold, which does not pay any yield for investors

Gold market analyst Koichiro Kamei said uncertainty will remain once Biden, a Democrat, takes up the U.S. presidency in January. Trump's replacement will likely face a Republican majority in the Senate that, though slight, will spell political gridlock. As such, Kamei said, Biden will have difficulty pushing through his legislative and budgetary agendas.

Biden will be taking office after the already sizable U.S. budget deficit further swelled due to coronavirus countermeasures. The twin deficits -- the gaping holes in the budget and current account -- and the Fed holding interest rates steady near zero will "support the trend of the weaker dollar," Kamei said.

Hiroyuki Kikukawa, chief analyst at Nissan Securities, said the Biden administration will be tested by the tensions in the Middle East, which will also work to support gold prices.

Meanwhile, after holding back for months, Asian consumers are expected to shrug off the higher price points and start buying up gold jewelry. Indian and Chinese demand for gold is usually so strong that the nations' buyers are often charged a premium over the price their peers in other countries pay for the metal.   © Reuters

Many market observers expect retail demand, especially from wedding ceremonies, to recover as many couples have delayed their vows due to the spread of the virus in China and India.

Goldman Sachs says retail demand is already showing signs of normalizing, noting that the Chinese and Indian gold premiums "are gradually increasing and are almost back to pre-COVID levels." The investment bank added that Biden's electoral victory and the vaccine rollouts will increase the value of currencies that Asians earn and thus buoy their purchasing power.

Goldman's analysts are not the only ones convinced gold will rise.

"Even if the world can recover from the pandemic to some extent," gold analyst Kamei said, "the structural factors that support higher gold prices will be present."