Hong Kong's Hang Seng index has had its best start to a year since 1989, powered by record buying from Chinese investors. (Photo by Dean Napolitano)
Market Spotlight

Hang Seng will be made more relevant for tech companies

Just as the stars seemed to be aligning for the worst performing major stock index of 2020, with record inflows of mainland money and an impending shakeup of the Hang Seng Index set to boost the relevance of sought-after new economy stocks, the government shook investor sentiment in recent days with plans to raise the city's trading tax for the first time in 28 years

The increase, to be implemented in August, is a chunky 30% -- taking the rate from 0.1% of transaction value to 0.13%. Investors fear more could come as Hong Kong faces years of budget deficits due to the costs of dealing with the coronavirus pandemic.

Four analysts Nikkei Asia spoke to expect a 5% to 10% fall in stock trading in Hong Kong as a result of the tax increase, though they expect that overall liquidity and the health of the global economy will remain pivotal for the outlook of the market.

"The tax increase does take some shine off the biggest revamp of the Hang Seng Index in years," said Kenny Wen, wealth management strategist at Everbright Sun Hung Kai. "It has impacted the short-term market sentiment and investors also fear more such increases. "However, the tax is just one component of the cost for investors and over the medium-to-long term, the addition of more technology names will only help lift the allure of the index."

The compiler of Hong Kong's main stock index on Friday said that as part of its regular quarterly review, it will add three companies, including Alibaba Health Information Technology, to its benchmark index, taking the number of constituents to 55 from March 15.

On Monday, it is due to announce the outcome of a consultation over its proposal to expand the Hang Seng, the market's benchmark for 52 years. The number of constituents, kept at 50 until last November, could rise to 65 or as many as 80 amid a deluge of Chinese companies listing in the territory. The exercise could also cut the weighting in the index for financial stocks from 43% to around 33%, while giving a bigger weighting to tech stocks.

The index has had its best start to a year since 1989, powered by record buying from Chinese investors through the stock connect program, which allows them to buy shares on the city's exchange. They bought $54 billion this year through Feb. 23, compared with $83 billion for all of 2020.

The mainland backstop allowed the index, still heavily weighted to financials and property stocks, to close the gap against peers such as the MSCI China index, which includes mainland companies listed in Hong Kong, Shanghai and Shenzhen, as well as foreign exchanges such as the Nasdaq Stock Market.

The Hang Seng revamp is intended to make the index more representative of the stocks listed in Hong Kong and a better proxy for listed Chinese companies.

However, on Feb. 24, the day the government unveiled the transaction tax increase, the buying spree was broken and the Hang Seng recorded its steepest tumble since May. Mainland investors turned net sellers of Hong Kong shares for the first time since Dec. 18, dumping a record $19.95 billion Hong Kong dollars ($2.6 billion) worth.

The index dropped 5.2% last week, its biggest slump in a year. 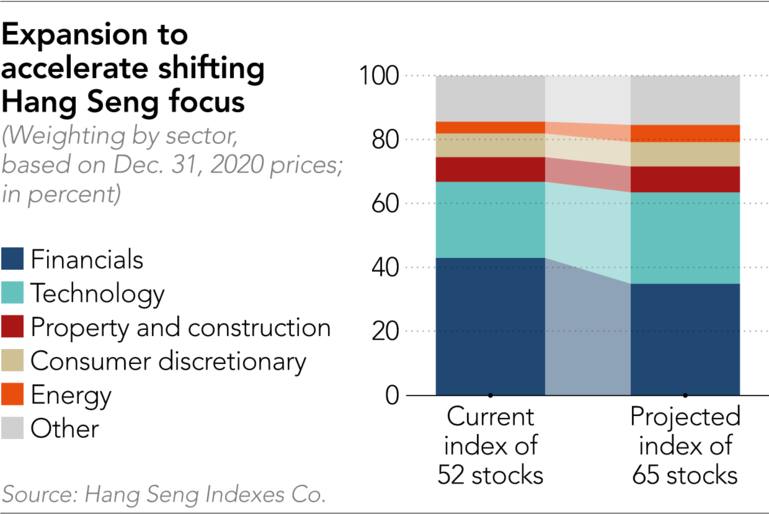 Hong Kong's government is staring at a record fiscal deficit of HK$257.6 billion for the fiscal year ending March 31 and HK$101.6 billion for the next year. Financial Secretary Paul Chan said the decision to raise the transaction tax levied on stock trades, known as the stamp duty, was taken after factoring in the impact on the securities market and the city's international competitiveness.

"On the mainland, yes, their stamp duty is lower, but they charge other items, [and] there is also foreign-exchange control. Here in Hong Kong, there's free flow of capital [and] we have a market that is both large in both depth and breadth," he told a Legislative Council Finance Committee meeting "So even if we increase the stamp duty... we remain highly competitive."

"However, it is also important for Hong Kong's capital markets to stay competitive with global financial markets, many of which are trending toward reducing or removing such duties. The introduction of future taxes should always be done with careful review and as much consensus as possible with the community."

Investors face no such trading tax in the U.S. or Japan, though the U.K levies 0.5% on buying and selling shares. Unlike many peers, Hong Kong also does not tax capital gains or dividends.

Total stock market volumes in Hong Kong rose 49% in 2020 and so far in 2021, trading volumes have surged to double 2020 levels, according to CCB International Securities.

Hong Kong has also gained from a jump in new listings, partly driven by U.S.-listed Chinese companies seeking a secondary back up position amid rising tensions between Beijing and Washington.

Companies have raised $8.4 billion in Hong Kong so far this year, according to Dealogic. This follows a record $52 billion raising in 2020, when the Hong Kong Stock Exchange lagged only the New York Stock Exchange and Nasdaq globally. 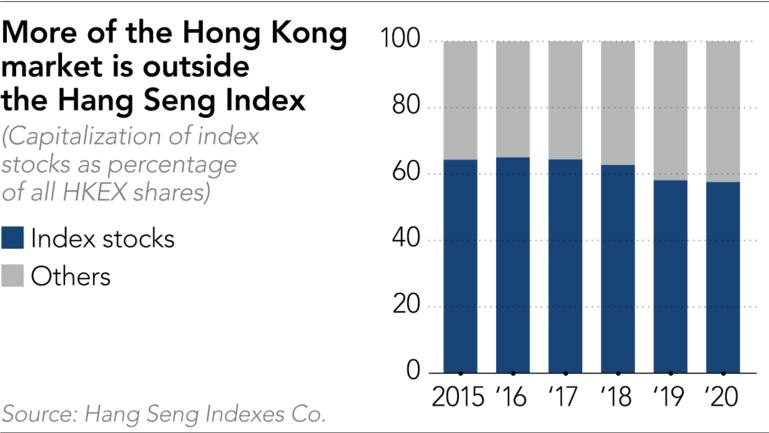 Since 2018, 37 U.S.-listed companies have taken up spots on the Hong Kong exchange. Their combined market value of $1.4 trillion represents or a quarter of the Hong Kong stock market's capitalization.

The planned changes to the benchmark aim to keep it relevant. Companies that make up the Hang Seng represent 57.6% of the total market value of the city's stock market, down from 65% at the end of 2016.

The transaction tax increase will hurt high frequency and quant traders, who make up a tenth of volumes currently and could prompt institutional investors to make more use of derivatives contracts which are exempt from such tax.

While the tax is not big enough to derail the rush of secondary listings, it could delay the pick up in trading volumes for such stocks in Hong Kong, undermining efforts to build liquidity.

The increase in the transaction tax by itself "is insufficient to cause liquidity to flow back to the U.S., but the pace of conversion from American Depositary Receipts into Hong Kong-listed shares could moderate," UBS analysts Kelvin Chu and Sam Tang said in an investor note, referring to fund managers swapping U.S.-traded securities of Chinese companies for Hong Kong versions.