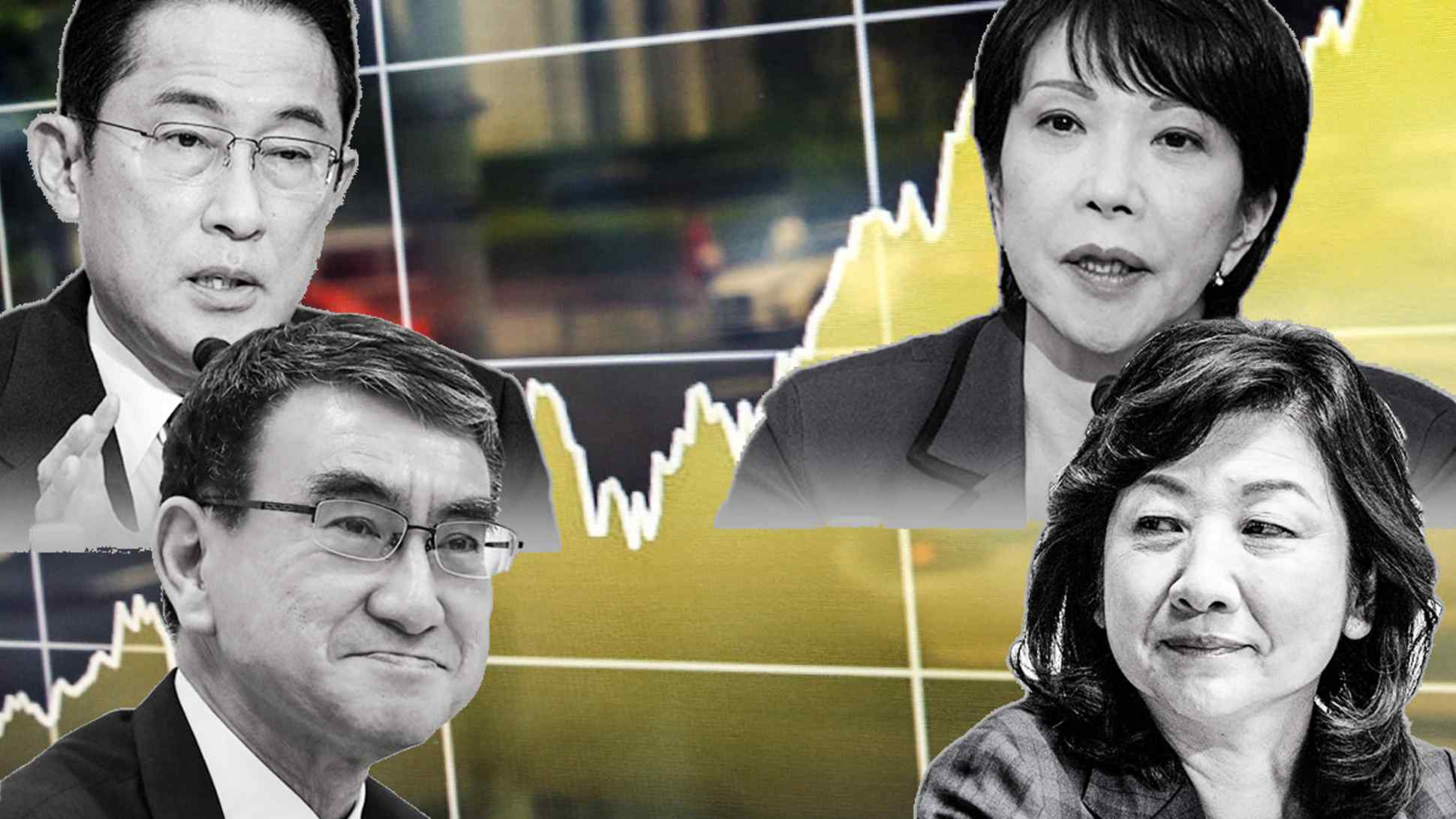 How the winner of Japan's PM race could affect markets

TOKYO -- The prospect of a new prime minister has sent Japan's stock market to its highest level since 1990 as investors hope stronger leadership and fresh policies will spark change in the world's third-largest economy.

The four candidates to succeed Yoshihide Suga as leader of the ruling Liberal Democratic Party face off in a poll of party members and members of parliament on Wednesday. If no one wins a majority of ballots, the top two candidates will then head into a runoff, with the victor set to become prime minister ahead of a general election due before late November.

Promises of a large fiscal package to boost the pandemic-hit economy have fueled the equity rally, and the candidates share other common policies including going carbon neutral and accelerating digital transformation in areas like education and health care, as well as easing domestic restrictions as the rollout of COVID-19 vaccines progresses.

But there are also sharp distinctions between the candidates, meaning different sectors may emerge as stock market winners depending on the outcome.

Taro Kono is the 58-year-old social media savvy administrative reform minister and minister in charge of vaccinations, whose election would mark a generational shift and a liberal turn for the LDP. According to a Sept. 18 poll by Kyodo News, Kono leads the race with the support of 48.6% of the LDP's rank-and-file members, although lawmakers' votes suggest the election will be close.

He has advocated for a shift away from nuclear power and said a new stimulus package should prioritize spending on renewable energy. He has also vowed to include support for a nationwide expansion of 5G networks.

Tomoichiro Kubota, a senior market analyst at Matsui Securities, said investors have already reacted by buying shares of West Holdings, a solar energy company. Its stock price is up 14% this month. Similar companies like Renova, operator of solar and biomass power plants, and Erex, a biomass power plant operator, have also seen their shares jump over 20% in the same period.

Marcel Thieliant, a senior Japan economist at Capital Economics in Singapore, cautioned that a target of carbon neutrality by 2050 is already Japanese policy, introduced by Suga. "Kono would have to back [the target] up with actual spending," Thieliant said. 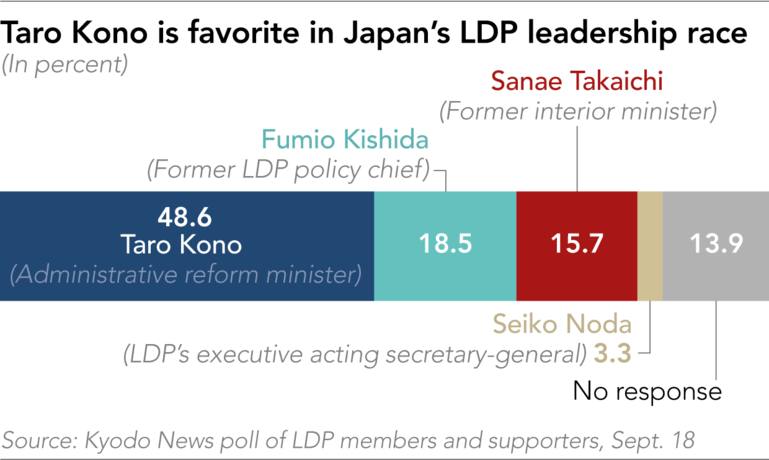 The other top contender is the LDP's former policy chief, Fumio Kishida, an establishment candidate, who has proposed an economic stimulus package worth "tens of trillions of yen."

He has called for establishing a 10 trillion yen ($90 billion) university fund to expand investments in science and technology, and promoted what he calls a "digital garden city state" concept to revitalize regional areas through high-tech investments from autonomous driving to smart farming, which could help companies operating in these sectors.

Another focus of Kishida's policy pitch is reducing income disparity in a bid to support economically vulnerable citizens, and to prevent large corporations from "bullying" smaller businesses.

According to the Japan Fair Trade Commission, in the year through March, a record 8,107 companies were issued administrative guidance due to violations of the Subcontract Act, which aims to protect subcontractors from unfair trade practices such as late payment.

Junichi Makino, a chief economist at SMBC Nikko Securities in Tokyo, said that, under Kishida's policies, "big companies with many subcontractors need to watch out."

Hard-line conservative Sanae Takaichi looks to be the third-place candidate but catching up. The former internal affairs minister is backed by Shinzo Abe, who was prime minister from 2012 to 2020.

An investor survey by Nomura Securities this month revealed that market participants expect Japan's stock market to rise the most if Takaichi wins, since investors view her stance on fiscal and monetary policy as the most accommodative. Her remodeled version of "Abenomics" has been dubbed "Sanaenomics," consisting of monetary easing, flexible fiscal spending and the pursuit of growth.

Hiroshi Matsumoto, head of Japan investment at Pictet Asset Management, said that Takaichi is a "wild card" who has urged the Bank of Japan to take employment into account as well as inflation.

"If she steps in and shows strong leadership through the implementation of a dual mandate [for the central bank], it could really impact the stock market," he said.

Takaichi has also said that Japan needs to promote the domestic production of therapeutic drugs and vaccines in the face of COVID-19, so "pharmaceuticals could be a sector that performs well" if she wins, Matsumoto added.

A former minister of internal affairs and the LDP's executive acting secretary-general, Seiko Noda was the last to enter the race and it would be an upset if she were to secure a place in a runoff. Like Takaichi, she is seeking to become Japan's first female prime minister.

Masahiro Ichikawa, chief market strategist at Sumitomo Mitsui DS Asset Management, said that among Noda's policies, "her focus on measures related to supporting children and tackling Japan's low birthrate stand out the most."

Having spoken about her own experience struggling with fertility treatment as well as raising a son with disabilities, she has outlined a plan to establish an agency dedicated to children.

Matsui Securities' Kubota noted that "other candidates like Kono have also expressed similar policies involving children," and pointed to Karadanote, a company that offers a variety of apps related to childbirth and child care, as a potential beneficiary. The opposition, and the pandemic

The new prime minister -- whoever he or she may be -- must immediately face a general election in which the main opposition, the center-left Constitutional Democratic Party, had been hoping to pick up seats as a result of Suga's handling of the COVID crisis.

The market has rallied largely because the prospects of gains for the opposition -- which includes the Communist and Social Democratic Parties -- has receded.

Masamichi Adachi, economist at UBS Securities in Tokyo, said "it would seem likely that the current coalition government will continue" and "a stable government is likely to be welcomed not only for necessary structural reforms to boost productivity but also from a market perspective."

The ability of the new LDP leader to enact their distinctive policy agenda will hinge on the size of their victory, the parliamentary math after the election and, perhaps most of all, their success or failure in tackling COVID.

Although Japan has seen new infections decline in recent weeks and is approaching a finish to its state of emergency covering Tokyo and 18 other prefectures through the end of the month, the winner will likely be forced to focus on COVID control measures to avoid any resurgence.

"If it turns out that the new prime minister has no effective measures to contain the pandemic, it will be no different from the Suga administration," said Sumitomo Mitsui DS Asset Management's Ichikawa. "This could lead to disappointment among investors."