After a recent strong rally, Indian stocks are trading at roughly 30 times the estimated earnings per share for the year ending March. (Source photo by Reuters)
Market Spotlight

TOKYO -- The Indian equity market is about to end 2020 at a record high, bouncing sharply from a trough in March, even as the pandemic continues to ravage the country.

India's benchmark BSE Sensex index of 30 stocks hit at one point an all-time high of 46,992.57 on Thursday, up over 83% from the bottom of 25,638.9 recorded on March 24, when Prime Minister Narendra Modi announced the world's biggest lockdown.

The rally seems counterintuitive considering the magnitude of economic damage inflicted by the nationwide lockdown, which ground the movement of goods and people to a halt, paralyzed economic activities, and led to the evaporation of over 100 million jobs overnight.

Yet, stocks have risen in spite of the government's failure to control the spread of COVID-19, even under the most stringent lockdown. Daily infections neared 100,000 at their peak in September, and the country's death toll has topped 140,000 -- third-highest in the world after the U.S. and Brazil.

Analysts attributed the rally in part to foreign institutional investors and retail investors looking for bargains after the panic sell-off in March. But they said the rally then continued in response to a streak of positive surprises -- both in macroeconomic indicators and corporate performances -- and also as key markets tracked higher.

"The Indian equity market is synchronizing with global equity markets, which are buoyed with abundant liquidity supplied by major central banks to cope with the pandemic," said Nirav Sheth, chief executive of institutional equities at Emkay Global Financial Services, a Mumbai-based brokerage. By the beginning of August, the Sensex was already up more than 40% from the March bottom, puzzling analysts. Coronavirus infections were increasing, banks' nonperforming loans were predicted to increase from an already world's worst, and the IHS Markit purchasing managers' index continued to deteriorate in July.

As positive news of India's fundamentals continued to emerge, net buying by foreign investors hit an all-time monthly high of $8.1 billion in November. By Dec. 17, foreigners' net stock purchase had already reached $6.2 billion for the month, as net buying since March totaled over $27 billion.

Domestically, even though mutual funds recorded net outflows for five consecutive months through November, the number of stock trading accounts held by retail investors at brokerages surged this year by 42% to a record $26.8 million by end-November, according to Central Depository Services.

The retail trend seems set to continue. "The recent bull run has prompted me to start investing in stocks," a Mumbai-based accountant who started trading stocks told Nikkei Asia. 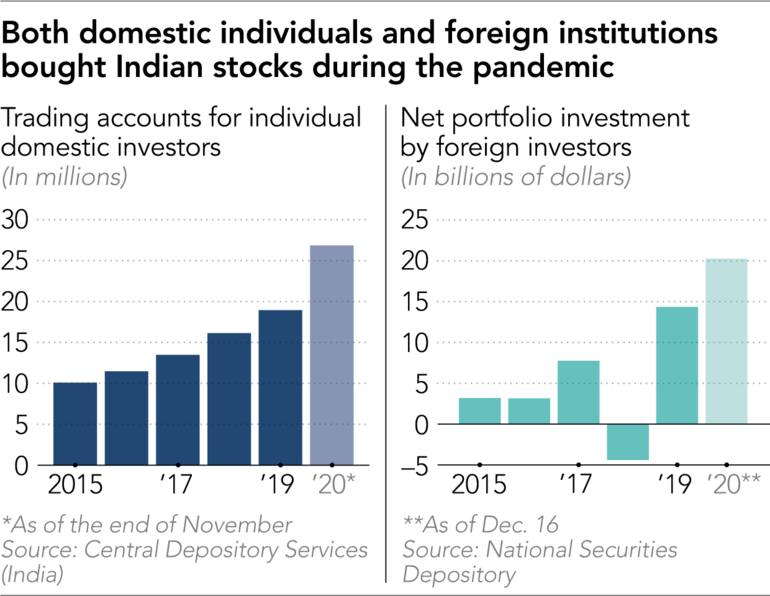 Indeed, positive signs in business fundamentals were emerging. The first big surprise came early in October, when IHS Markit announced that the September Purchasing Managers' Index had risen to 56.8 from 52 in August, hitting its highest since January 2012.

Thereafter, corporate earnings reports for the July-September quarter backed up the index.

Major information technology service companies such as Infosys, drugmakers such as Dr. Reddy's Laboratories, steel-makers such as JSW Steel, automakers such as Tata Motors and even some banks like ICICI Bank announced stronger-than-expected earnings in the quarter and raised their guidance for the fiscal year ending March.

Hong Kong-based brokerage CLSA said in a November report that it made an upward revision of its estimates of the average earnings per share of the 50 stocks on the Nifty index for the first time in 24 quarters. Analysts made their revisions for the fiscal year ending March for 64% of the companies they covered, compared with just 17% downgrades.

Meanwhile, positive earnings in several sectors indicated improvements in some of the most complicated structural issues that had been hindering the Indian economy for years.

"To my big surprise, the residential property market is coming back very strongly for the last three, four months after eight years of a bear market in terms of transaction volume," said Emkay's Sheth. "That may explain part of the strong earnings," he said, pointing to the subsequent increase in demand for construction works as well as materials and housing items.

The Indian residential property market was hit by the sudden introduction of strict consumer protection rules in 2017 and then dragged down by a credit crunch that started in 2018. Many residential projects stalled as developers ran out of money and buyers ended up with mortgages for unfinished flats and houses. 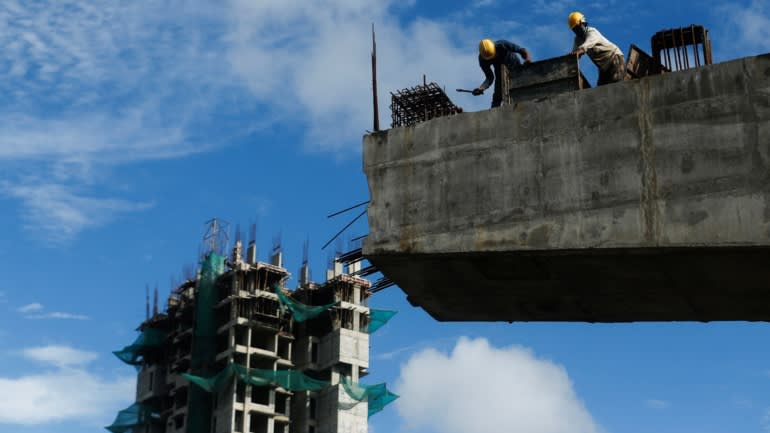 India has witnessed a recovery in the residential property market, which has also led to increased demand for materials such as cement.   © Reuters

The government started last fall to create state-backed debt investment funds to provide loans to kick-start stalled projects. Some of the projects in major cities, including New Delhi and Mumbai, were restarted as a result.

Through this troubled process, smaller, undercapitalized developers went out of business, which actually helped the fragmented industry in weeding out weaker players.

On the other hand, aggressive rate cuts and quantitative easing by the central bank in the wake of the pandemic have given the housing market a boost.

Another positive surprise came from banks.

Many feared in late March that the pandemic and subsequent lockdown may lead to a jump in banks' nonperforming assets due to bankruptcies and another credit crunch. However, this has not arisen, thanks to central bank policies and companies' earnings recovery.

According to Credit Suisse analyst Ashish Gupta, the aggregate amount of debt carried by those overleveraged companies with an interest-coverage-ratio of below one decreased significantly in the July-September quarter thanks to earning improvements, particularly in the steel and telecom sectors.

The gross NPL ratio of all nationwide-operating commercial banks at the end of September was 7.7%, down from 9.3% a year earlier, according to CARE Ratings. It also cited a special measure taken by the central bank in August to allow lenders to restructure loans so they did not fall into the nonperforming asset category. 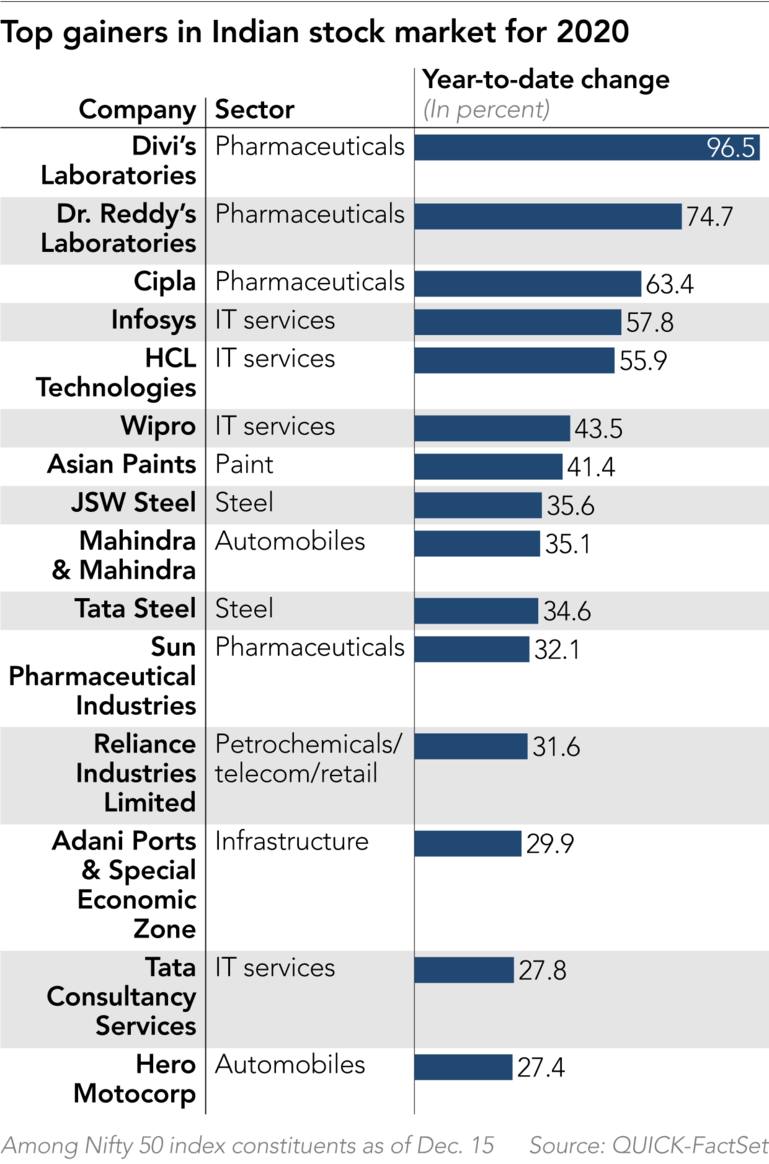 Other positives include a recovery in global steel prices and passenger car demand after a long slump.

Remote working and corporate digital transformation are driving demand for companies such as Infosys, HCL Technologies and other IT companies. Tech stocks are among the top gainers on the Nifty index this year.

Even after analysts completed upward revisions of earnings, Indian stocks are still trading at roughly 30 times their estimated earnings-per-share for the year ending March. With such a high price-to-earnings ratio, the rally may soon peak.

"Sooner or later, we will need to do a reality check regarding corporate earnings and the entire economy's strength," warned Aditya Narain, head of equity research at Edelweiss Financial Services. "We'll see how the resilience this economy is showing plays out on aggregate growth. We'll see some signs by early February, when the next fiscal year budget is submitted to the parliament."