The Bank of Thailand is putting domestic needs before external pressure to raise interest rates, Governor Sethaput Suthiwartnarueput said in an interview with Nikkei Asia on May 20. (Photo by Francesca Regalado)
Market Spotlight

BANGKOK -- The Bank of Thailand will keep the brake on interest rates, even as other central banks begin to tighten monetary policy, as long as inflation in Thailand remains contained to a small set of goods, its governor told Nikkei Asia in an exclusive interview.

Gov. Sethaput Suthiwartnarueput said the central bank is likely to revise up its inflation forecast for next year above 1.7% due to upside risks such as the war in Ukraine and sanctions on Russia. The new projection would still be within the bank's inflation target range of 1% to 3%.

The central bank's contemplative manner will stand out, as many central banks have moved to tighten monetary policy and raise interest rates to take account of rising prices.

"The policy challenge in many of the advanced economies is trying to engineer a soft landing...but in Asia, it's more to try to ensure a smooth takeoff because we're still recovering from the worst effects of COVID," Sethaput said.

Thailand, like many emerging economies, is facing the two-pronged challenge of recovering from COVID while managing inflation in food and energy prices. Inflation hit a 13-year high of 5.73% in March before falling to 4.65% last month.

"Prior to Russia and Ukraine, our focus as reflected in the statements put out by the monetary policy committee was clearly on growth," said Sethaput. "The concern on inflation has obviously risen in prominence. The balance between the two will be what guides our decision regarding rates going forward."

But in light of the Thai economy's stalling growth, the central bank is resisting market expectations of an early rate rise as well as external pressure from the U.S. Federal Reserve's moves.

Sethaput took the reins of the Bank of Thailand in October 2020, when the Thai economy was already deep in the pandemic slump.

The Yale-educated economist worked at the World Bank in Washington before returning to Thailand, where he held posts at the Stock Exchange of Thailand and Siam Commercial Bank. Sethaput served on the Thai central bank's monetary policy committee for six years before his appointment as governor.

The seven-member monetary policy committee kept interest rates steady at 0.5% at its March meeting. The next rate-setting meeting will be in June. The central bank expects inflation to peak above 5% in the second and third quarters of 2022, but ease thereafter. 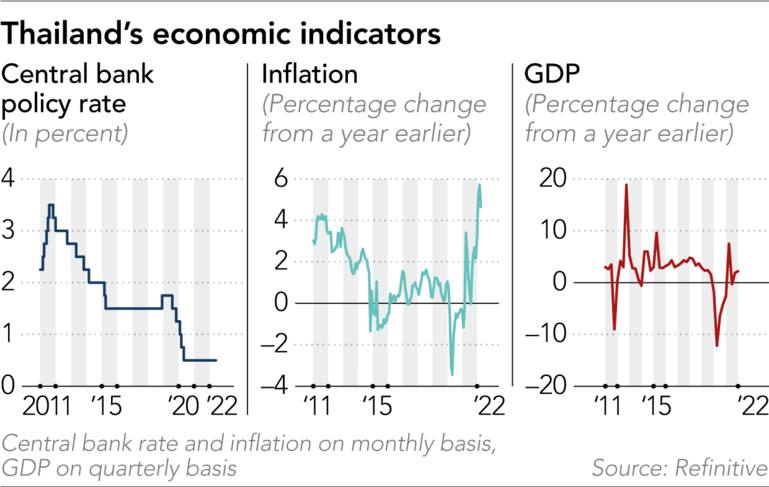 Most analysts expect the Thai central bank to keep interest rates low throughout 2022 as it prioritizes growth and easing the debt service burden on households and businesses. Thailand's economy expanded 2.2% in the first quarter of 2022, mainly due to exports helped by the weakening baht. Last week, however, the National Economic and Social Development Council cut its economic growth target for 2022 to between 2.5% to 3.%, down from the 3.5% to 4.5% forecast in February.

Markets, on the other hand, have been pricing in an early rate increase. Yields on two-year government bonds climbed sharply from 1.355% to 1.940% in the past 10 days. The one-year interest rate swap rose rapidly above 1%, incorporating investors' bets that the Bank of Thailand would bow to inflation and raise the policy rate by 0.25% twice, or by 0.50% once, in the year ahead.

The governor does not agree. "When we looked at the composition of that inflation, the things that we highlighted were relatively concentrated," Sethaput said of the committee's rationale. "It reflected overwhelmingly cost-push, supply-side type inflation. There was little to no evidence of any demand-side inflationary pressures," the 57-year-old said.

The governor maintained that the Fed's rate rises would not impact the Bank of Thailand's policy decisions. The Thai baht has traded above 34 baht to the U.S. dollar, since the Fed raised rates by 50 basis points at its May meeting. The Fed's biggest increase since 2000 was spurred by an 8.3% annual inflation rate in April. Economists expect the Fed to increase by a similar proportion at its next two meetings.

The European Central Bank has signaled a similar move coming in July. India's central bank announced a surprise rise of 40 basis points after an unscheduled meeting earlier this month. In Thailand's backyard, the Philippines raised interest rates last week, the first increase since 2018.

Inflation is expected to rise again this month after a price cap of 30 baht per liter of diesel ended on May 1. The price cap as well as subsidies for essential goods contributed to April's lower inflation reading. However, household and business expectations for medium-term inflation remain "reasonably anchored," said Sethaput. This may happen if input prices rise, already seen in fertilizer and animal feed, as well as a slow recovery in tourism-related jobs and income. Differences in policy directions between the Bank of Thailand and other hawkish central banks may further accelerate a depreciation of the Thai baht, resulting in higher inflation through imported goods.

Sethaput disagreed and said Thailand would be able to manage capital outflows that may result from further global rate hikes. "We have very good external buffers. We have high foreign reserves, we have low external debt," he said.

Sethaput said the biggest risk for Thailand lies in tourism, which accounts for about a fifth of the country's employment. The industry contributes 12% of its GDP, which the central bank expects to recover to pre-pandemic levels in the first quarter of 2023.

"If you ask people in the first quarter of next year whether they feel like things are back to normal, I'm sure for most people the short answer would be no. And why is that? It's because their incomes and employment still have not recovered," said Sethaput.

Without income recovery, the high level of household debt, at 90% of GDP, is another motive for the Bank of Thailand to keep interest rates low. The central bank is looking to provide regulatory incentives for banks to undertake debt restructuring and to include financial literacy along with new credit instruments.

Sethaput said balancing the risk of raising debt and the benefits of financial inclusion were central to the rollout of digital banking licenses. The licenses are still in the consultation stage, but a pilot program for a retail central bank digital currency, or CBDC, is set to launch in late 2022.

The program would last for six months and involve 10,000 consumers, as well as bank and non-bank financial institutions. Its purpose would be to learn where a CBDC could improve on Thailand's existing payments system.