Institutional and foreign investors are buying semiconductor-related stocks, believing demand will remain strong for some time to come, according to one analyst. (Source photo by Kosuke Imamura)
Market Spotlight

TOKYO -- Semiconductor and related companies -- hobbled by supply chain problems and unable to keep up with a deluge of orders from the consumer electronics and auto industries -- have become the darlings of institutional investors playing the long game.

Shares in Tokyo Electron have gained 14% since the end of last year, reaching an all-time high. Japan's leading provider of semiconductor production equipment expects a 15% jump in revenue to 1.3 trillion yen ($12 billion) for the year through March.

The company, known for its coater/developers, machines used to coat wafers with a light sensitive material, is one of many in the semiconductor sector to attract more investors in the past few weeks as hopes for future growth and positive earnings soar.

South Korea and Taiwan, each of which has a big presence in the semiconductor industry, have been beneficiaries of the recent momentum, with their stock indexes sailing higher.

The industry's bright prospects are emerging from the pall cast by the coronavirus pandemic. After people were told to stay inside and cut down on outings, many bought personal computers to help them work or study at home and gaming consoles to entertain themselves. As device makers ramped up production, they ordered more chips.

Demand for smartphones that connect to high-speed 5G networks is having a similar effect on the semiconductor industry.

At the same time, the unprecedented demand has caused supply chain disruptions as chipmakers adjust their operations and scramble to ramp up output.

On the Tokyo Stock Exchange, the shares of Renesas Electronics, which specializes in chips used in vehicles, and those of Advantest, which makes semiconductor test equipment, have gained around 14% to 15% so far this year.

With investors rushing to buy into the sector, Japan's benchmark Nikkei Stock Average has been pushed higher, rising 4% in the two weeks since the market reopened after New Year's.

The benchmark has touched levels not seen in more than 30 years despite the country expanding its COVID-19 state of emergency to cover more than 10 prefectures.

Elsewhere in Asia, shares of Taiwan Semiconductor Manufacturing Co. have climbed about 13% since the end of last year. Compared to 12 months ago, the stock price of the world's top contract chipmaker has surged 80%.

In South Korea, shares of chipmaker SK Hynix and those of Samsung Electronics, the world's largest memory chipmaker, have gained around 8% this year, while shares of DI Corp., which makes semiconductor inspection equipment, have jumped over 16%.

Listed on the Hong Kong market, shares of Semiconductor Manufacturing International Corp., China's top chipmaker, have gone up around 25%.

Tomoichiro Kubota, a senior market analyst at Matsui Securities in Tokyo, noted that while short-term retail investors are selling semiconductor shares, "institutional and foreign investors are buying these stocks on the long-term view that demand will continue to be strong."

Keen that the chip market will continue to accelerate, these investors have pushed the Philadelphia Semiconductor Index, also known as SOX, into record territory. The index, composed of 30 semiconductor companies, has gained more than 50% in the past year and scaled a new peak.

TSMC, which is also listed on the New York Stock Exchange and is included in the index, gave investors further encouragement on Thursday when it announced its profit for the last quarter of 2020 reached $142.76 billion New Taiwan dollars ($5.1 billion), up 23% on the year, on record revenue of NT$361.53 billion. The company also forecasts its revenue to grow at a compound annual rate of 10% to 15% for the five years through 2025.

Industry researchers are also projecting confidence in the semiconductor market.

According to Worldwide Semiconductor Trade Statistics, the global market for semiconductors is expected to expand over 8%, to $469 billion, in 2021. Last year the market increased by 5%, to $433 billion.

Yoshimasa Maruyama, the chief market economist at SMBC Nikko Securities in Tokyo, wrote in a report that the semiconductor market will likely "continue to expand in 2021 and the first half of 2022."

Asia-Pacific is the world's biggest market for semiconductors, according to a 2020 report by consultancy Deloitte, which states that the region accounts for 60% of worldwide semiconductor sales. 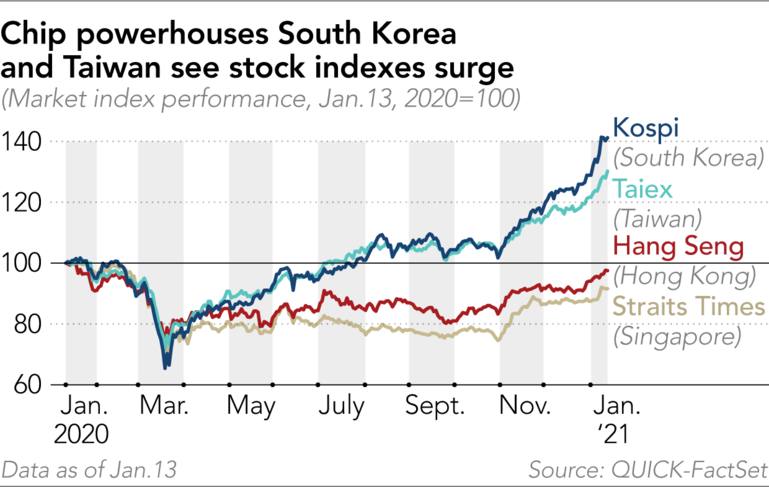 South Korea has surpassed Japan to become the second-biggest semiconductor country by revenue, after the U.S. The nation has developed a massive supply chain, and the two main players, Samsung Electronics and SK Hynix, have a combined market capitalization that accounts for over 20% of the Kospi index.

Taiwan has also become a semiconductor dynamo, led by TSMC, and is the world's biggest foundry.

In the past year, South Korea's and Taiwan's benchmarks have reached record highs, supported by surging semiconductor stocks. Both have outperformed more noted Asian benchmarks in Singapore and Hong Kong.

Meanwhile, some automakers have been unable to procure enough chips and have had to cut back on production. The list includes Germany's Volkswagen as well as Japan's Toyota Motor, Honda Motor, and Nissan Motor.

On top of the acute scarcity of chips, reports are surfacing about Apple entering the automobile market, stoking fears of intensified competition down the road.

Nissan has lost nearly 5% this year while Toyota's stock price has dropped close to 3%.

SMBC's Maruyama notes that "it is necessary to watch out for any possible conflict between the U.S. and China that would cause supply restrictions."