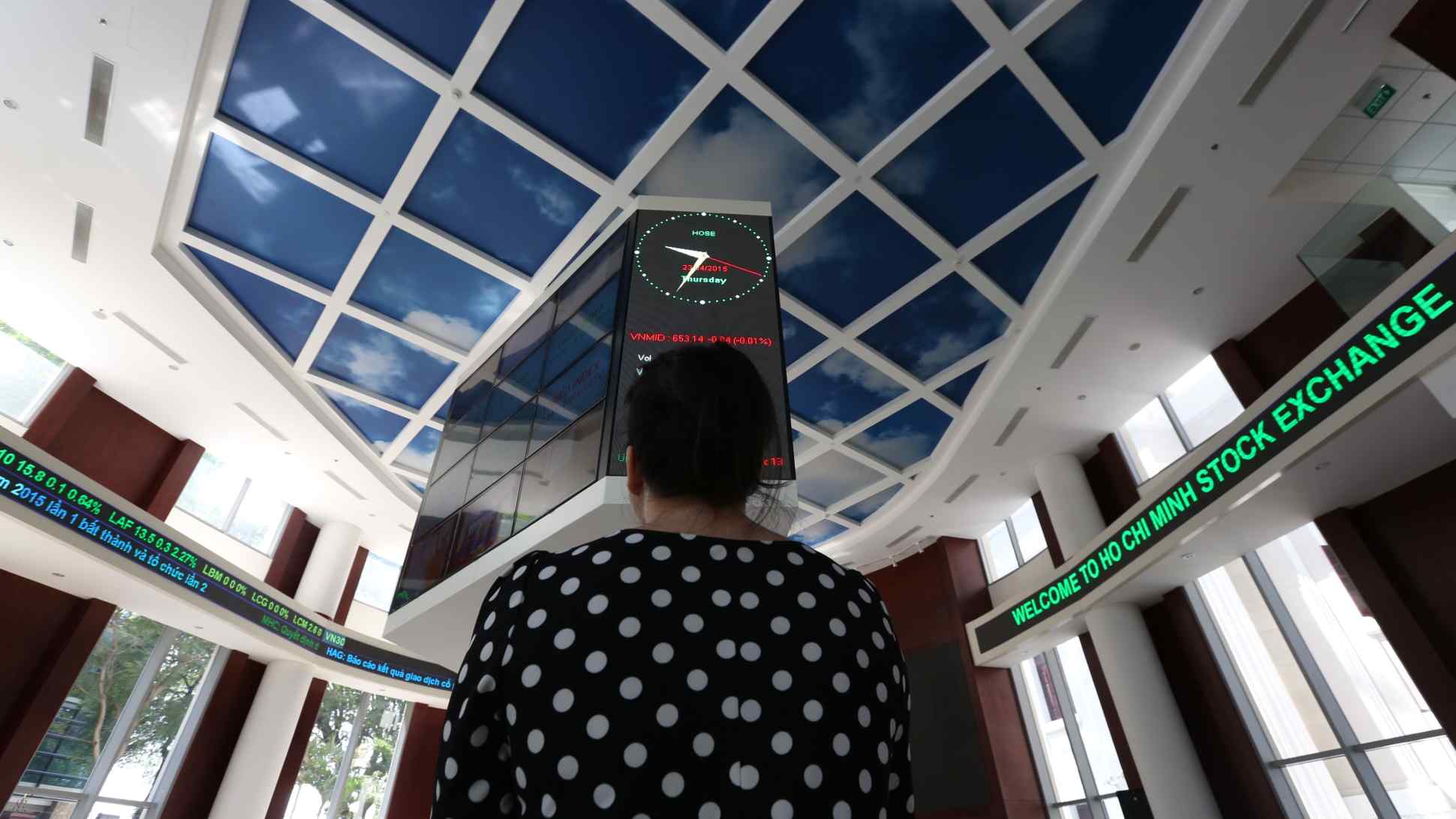 HO CHI MINH CITY -- The stock market crashed in Vietnam in March 2020, following bourses around the world lower as the coronavirus pandemic took hold. But rather than panic as he watched stock prices fall day after day, Dinh Thanh Cong decided to open a trading account.

Friends told him the cheap shares were a buying opportunity, so Cong became one of nearly 400,000 new stock investors in Vietnam last year. The record increase in amateur investors marks a turning point for the Southeast Asian frontier market, where locals who once poured cash into condos and savings accounts have pivoted to shares.

Some are chasing higher returns while others are investing their parents' earnings or became securities hobbyists during the COVID lockdown, analysts say.

As in the U.S., where use of the Robinhood investment app rocketed among Americans stuck at home, Vietnamese have taken to smartphone apps to trade remotely.

"During COVID I had some time to work from home, so I had time to do other things," said Cong, who has a day job as an engineer. He downloaded the SSI trading app to track his holdings and said he checks it four times a day. 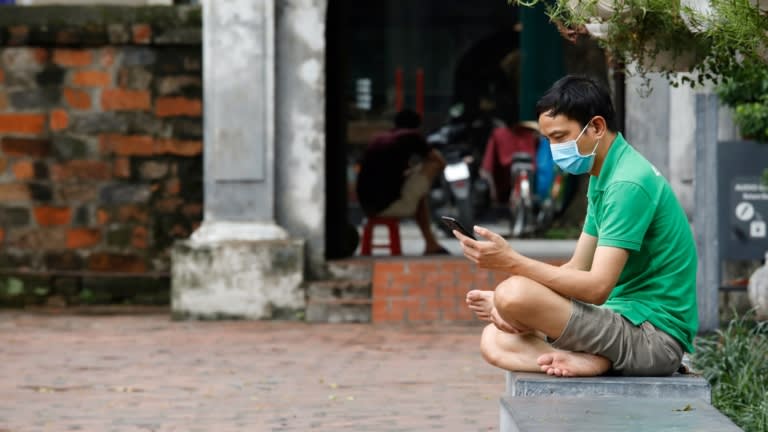 Vietnam's new investors are using their smartphones to trade shares, a trend fueled by the coronavirus pandemic.   © Reuters

Professional traders say the new wave of mom-and-pop investors is flooding Vietnam's stock market for three reasons: Interest rates have dropped, pushing deposit holders to seek returns elsewhere; Vietnamese have more cash to invest, from entrepreneurs who shut down businesses during the pandemic to children who have inherited wealth from the generation that started companies in the 1980s; and social distancing over the past year, which has kept people indoors and on their smartphones, has given cash-rich Vietnamese an opportunity to check out the stock market.

In 2020, the Vietnam Securities Depository counted 2.7 million domestic individual accounts, a record jump of 16.8% versus 2019. The trend has continued this year, with 86,000 trading accounts opened in January alone, higher than any month in 2020.

Even as some fret that stocks are getting frothy, Lim says retail investors are becoming more informed and predicts that changes to the market will justify a doubling or tripling of trading volumes in the next few years.

The government aims to have Vietnam upgraded from frontier to emerging market status on the MSCI and FTSE share indexes. That will require loosening restrictions, however, such as allowing greater foreign ownership and intraday trading.

In the past, Vietnamese referred to rookie investors as "chickens" -- as in ready for slaughter. More recently, the moniker "F0" has taken hold, a term inspired by the fight against the pandemic. F0 refers to a confirmed COVID case, with F1 and F2 being contacts one and two degrees removed. In investment parlance, F0 refers to neophyte traders. For Vietnam's young stock market, the surge in first-time investors demonstrates that owning shares is becoming a norm, said Huynh Minh Tuan, brokerage director at Mirae Asset Securities. "The mindset of Vietnamese people has changed, they used to have a basic view of assets," he said in an interview. "Now the thinking is, 'I have to have many asset classes.'"

In 2019, interest on bank deposits exceeded 8%. However, in response to the pandemic the State Bank of Vietnam, the central bank, cut interest rates three times last year. Retail banks followed suit, which, in turn, encouraged people to put their money into stocks.

Interest rates may rise if the world economy recovers this year, but other conditions are pushing people into equities, including Vietnam's tightening supply of real estate, historically a popular place to park cash. Condominium sales in Ho Chi Minh City fell 20% on the year in the fourth quarter, while sales in Hanoi nose-dived 52%, according to Cushman & Wakefield, a real estate consultancy.

Tuan said there is another reason for the flow of money into equities: the rise of a generation flush with inherited wealth. Once the ruling Communist Party opened the door to capitalism in 1986, Vietnamese began to privatize state companies or start their own businesses. Three decades later, their children are coming of age. They study abroad, take over their parents' companies, invest their saved earnings in shares or other assets -- or all three.

This combination of behaviors makes for increasingly informed investors, Tuan said, which include the next generation of entrepreneurs and wealthier citizens more broadly. Disposable income per capita is rising by more than 9% annually and is forecast to reach $3,062 in 2023, according to U.S. consultancy McKinsey & Co.

"New people coming into the stock market will probably be more educated, do more research themselves," Lim said. "New blood will come in." Vietnamese want to see a homegrown unicorn along the lines of Tokopedia, the Indonesian e-commerce site, or Grab, a ride-hailing app founded in Malaysia. But not many big companies have gone public in Vietnam since 2018.

Vietnam has two bourses, the Ho Chi Minh City Stock Exchange and the Hanoi Stock Exchange. Their combined market capitalization of $211 billion is the smallest among Southeast Asia's six big economies. The next-lowest market cap is the Philippines' stock market, at $315 billion, followed by Malaysia at $436 billion.

But as the bulls rush in, Ngo Van Khai foresees a bubble in Vietnam. An asset allocator at Timensit investment fund, Khai says too many of the amateur investors are speculating on the market. "They're not concerned about risk, they're only concerned about return," he told Nikkei Asia. "Some in this group are destined to lose money."

F0 investors run the gamut from factory hands, to white-collar workers, to students. Khai said the pandemic downturn gave them not only the time to look at the stock market, but also the motivation. Vietnamese have turned to stocks to make money -- some because they lost their jobs, others because they can't invest in their businesses, several analysts said. Last year 101,700 companies closed or suspended operations, a 13.9% rise from 2019, according to the General Statistics Office.

So many people piled into the market in December, the government's Vietnam News reported, that they jammed the Ho Chi Minh City Stock Exchange, which temporarily halted orders. The frenzy continued after orders resumed, as trading volume reached an all-time high of 317 trillion dong ($13.8 billion) in March, the exchange said.

The country's dearth of initial public offerings may soon come to an end. Mobifone, a telecommunications company, Agribank, and Vinafood are among the state-owned enterprises that Tuan expects will list shares in 2021.

Investors may have to wait longer for the hot tech stocks that symbolize modern Vietnam, however. E-wallet MoMo's IPO could come as late as 2025, while VNG, a gaming unicorn, said back in 2017 that it would list on the U.S. Nasdaq, but has given no updates since.