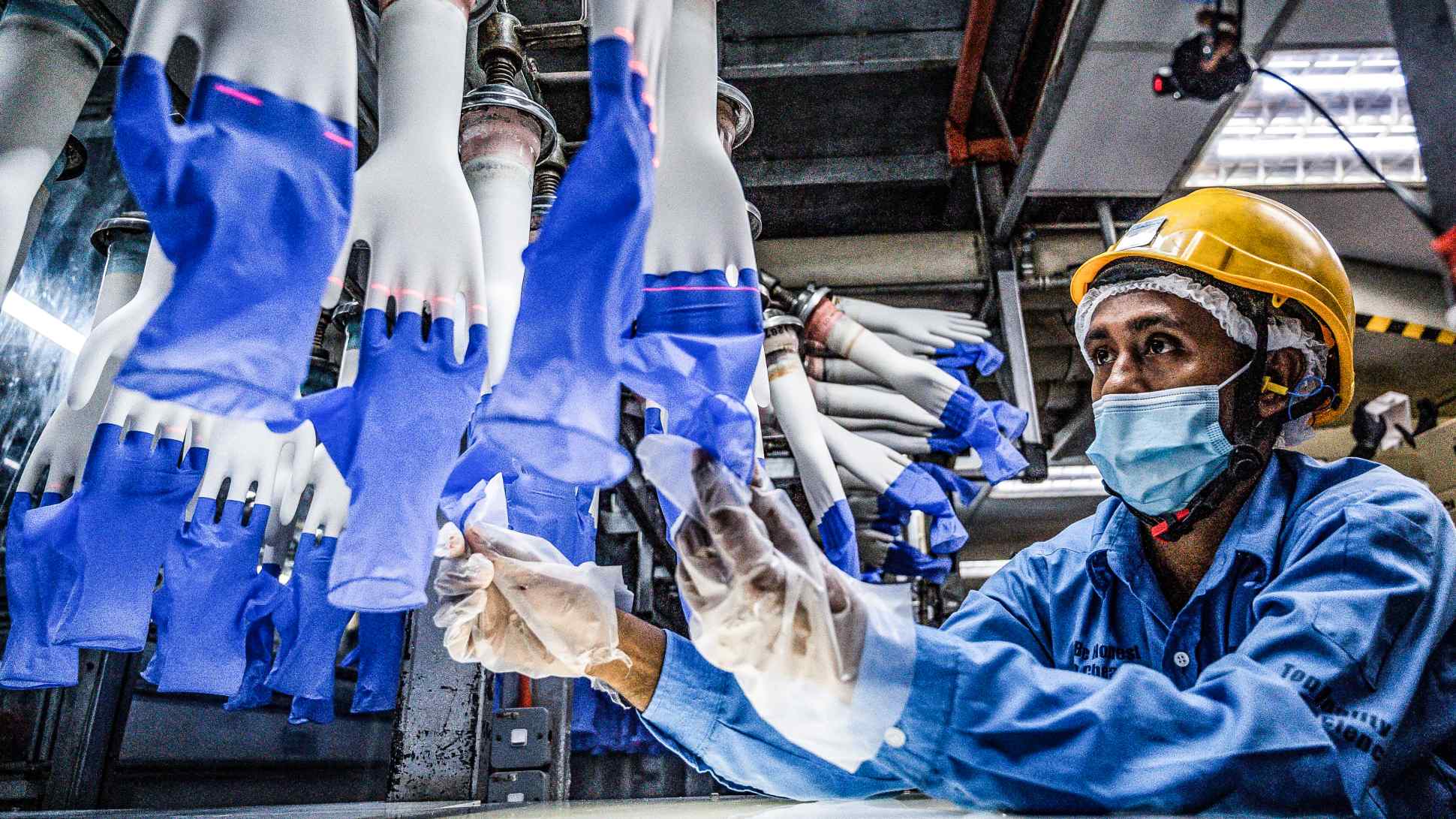 KUALA LUMPUR -- Malaysia's stock market, which got a boost last year from companies that did well out of the coronavirus pandemic, is now a COVID-19 loser -- to the point where it stands out in 2021 as one of Asia's worst performing markets.

Last year, shares in the country's glove manufacturers rose exponentially as investors saw them capitalizing on soaring worldwide demand for medical gloves -- an essential part of the personal protective equipment used to combat the spread of the virus. Shares in Top Glove, Supermax and Hartalega, which together provide more than half the global supply of gloves, shot up by 170%, 1,233% and 147%, respectively, between May and December last year. They helped propel the benchmark index Kuala Lumpur Composite Index (KLCI), which rose 22% over the same period.

But the shine has come off the sector amid forced labor investigations involving some of the major glove makers in the country. Top Glove was slapped with an export ban in the U.S., while Supermax and Hartalega are under investigation by U.S. Customs & Border Protection.

In a reversal of last year's trend, shares of Top Glove, Supermax and Hartalega have declined 32%, 39% and 35%, year-to-date, respectively. Overall in 2021, the KLCI has declined almost 7%. That compares to growth of between 0.4% and 9.6% in Singapore, Japan and Thailand.

"It seems that the FBM KLCI is the only market that has not performed this year," Malaysia-based MIDF Amanah Investment Bank noted in a research report. The bank listed several factors that have affected the bourse. They include a fourth wave of COVID-19 in the country, which led to a lockdown, and a mini "taper tantrum" after the U.S. Federal Reserve hinted at an interest rate hike in 2023.

Malaysia is also embroiled in political turbulence. Prime Minister Muhyiddin Yassin is trying to fend off attempts to unseat him, and is set to face the country's parliament on Monday after a seven-month hiatus amid the state of emergency in place since January. The reopening of parliament will increase the premier's vulnerability.

"For example, as of the end of May 2021, Thailand and the Philippines have seen a cumulative net foreign outflow that is larger than [that of] Malaysia," he said. Foreign ownership of Malaysian equities remains above 20% of the market's capitalization, which Umar said was an indication that strategic and long-term investors remain.

Malaysia continues to battle COVID-19, with infections creeping back over 17,000 a day recently. As of July 25, the total caseload has crossed 1 million, with almost 8,000 fatalities.

Yeah Kim Leng, an economics professor at Sunway University, said the resurgence of COVID-19 and restrictions on movements imposed by the government will continue to dampen stocks this year. "The inability of the government to contain the pandemic, despite the declaration of an emergency and suspension of the parliament, has also heightened uncertainties over the country's recovery prospects," he said.

Muhyiddin has indicated the country will continue under lockdown, with only essential industries allowed to operate, until daily new cases come down to 4,000. To date, six states have been allowed to move to the second phase of the recovery plan, enabling a few more sectors to operate, though economically important Kuala Lumpur, Selangor and Johor are still in phase one.

"With corporate earnings expectations diminished by the weaker near-term economic outlook, it is not surprising that [Malaysia's] stock market performance has lagged the other ASEAN markets," said Yeah.

"The convergence of sustainability, responsible investing and Shariah investing is expected to deepen our competitive edge and make our offerings highly relevant to investors worldwide," he said.

Umar said Bursa Malaysia is looking to strengthen its global accessibility and broaden products and services in the derivatives market. The bourse has received a preliminary nod from the Securities Commission to conduct night trading sessions for derivatives in the fourth quarter. "This is a significant development that will provide greater access to global participants," he said. Vincent Lau, Rakuten Trade's head of equity sales, said stocks in Malaysia should perform better in the second half 2021 as vaccinations pick up steam and its economy and borders reopen.

Malaysia is vaccinating almost 400,000 people daily, and aims to increase it further this month -- in line with the government's aim to vaccinate 70% of the country's 32 million people by year's end.

MIDF noted that, given the headway in national inoculation efforts and a slew of fiscal programs, it expects an improvement in domestic demand with the reopening of the economy in the third and fourth quarters.

In line with the recovery, the bank also expects stronger interest in stocks in the automotive, banking, construction, consumer, health care, oil and gas, plantations, technology and industrial sectors. Industries that the bank is neutral on include gloves, power, telecommunications, and transportation and logistics.