The world's oil exporters, including shale oil producers in the U.S., have been unusually like-minded about curtailing output.   © AP
Market Spotlight

Oil market bounces back from COVID depths on vaccine optimism

TOKYO -- Ten months after turning negative for the first time in history, oil prices are floating up to their pre-COVID level, driven by vaccine optimism and oil producers' output cuts.

West Texas Intermediate reached $60 a barrel at one point this month, up 60% from October and the highest level since January 2020, before the novel coronavirus raced around the world and hammered economies.

Last week prices convulsed again as Texas was hit by a winter storm that left millions without power for days, and shut down refineries and pipelines. On Friday, prices slipped below $60 a barrel on speculation that refinery demand would be weak. On Monday, they returned to around $60 as U.S. crude oil production began kicking back into gear.

On April 20, the WTI benchmark fell as low as minus $37.63 a barrel due to market technicalities, expectations that the pandemic would decimate global oil demand and other reasons.

Oil agencies forecast that the recovery in demand for physical oil will take more time. The International Energy Agency in January cut its forecasts for demand in 2021 by 280,000 barrels a day, to 5.5 million, pointing out that spiraling infection rates had sparked a return to lockdowns in some countries, and that this will delay the expected rebound in demand.

Yet investors and hedge funds are jumping in, betting the vaccination drives that are gearing up around the world will encourage economies to swing upward. They reason that as restrictions begin to ease, travelers will reacquaint themselves with road trips and jetliners, bullish factors for oil prices. The globe's super-easy monetary policies are playing a role as well. The U.S. Federal Reserve has been supplying markets with massive amounts of cash, much of which is finding its way into oil and other commodities.

And governments are still spending wildly. U.S. President Joe Biden is pushing a $1.9 trillion stimulus package, and his Democratic Party controls both chambers of Congress, which could smooth the way.

Oil producers' supply cuts are also sustaining current price levels. OPEC+, a much larger group of oil-exporting countries than the original group, has since January reduced oil production by 7.2 million barrels a day, around 7% of global demand. And the compliance rate among the often-bickering cartel members is close to 100%.

In a surprising move, Saudi Arabia, OPEC's de facto leader, has decided to unilaterally cut output by 1 million barrels a day, about 10% of its production, this month and next. This is on top of what OPEC+ is doing. 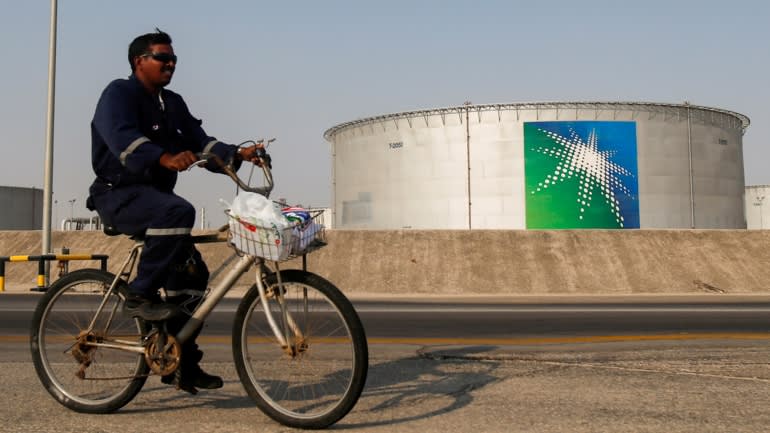 For Saudi Arabia, maintaining oil prices is more important than ever, now that state-owned Saudi Aramco is publicly traded on its domestic stock market. "The value of Saudi Aramco boils down to its oil reserves multiplied by oil prices," an industry observer said. "It's important for Saudi Arabia to raise oil prices to improve the company's value."

In the U.S., shale oil producers appear to have learned the same lesson. They have been cautious about increasing output. Many of these companies had struggled for years, leaving banks and equity funds hesitant to fund them. "We continue to expect that higher prices are needed for a rebound in shale activity," Goldman Sachs said in a report. With the Biden administration hinting it will restrict new fracking activity, "shale oil production is unlikely to significantly grow unless the administration's attitude changes," noted Tatsufumi Okoshi, a senior economist at Nomura Securities. He believes oil prices will remain in the high $60s. Many other economists believe oil prices could rise to around $70 or even $80.

Other experts point out downside risks.

Iran and the nuclear deal that the U.S. under former President Donald Trump pulled out of are variables that could throw the oil market off-kilter. With Biden seeking to restore the nuclear deal, it is possible Iran will resume oil exports -- up to 2 million barrels a day. Russia has signaled that it does not want further production cuts, with Deputy Prime Minister Alexander Novak telling a TV station that oil prices this year could average $45 to $60 a barrel.   © Reuters

Questions surrounding OPEC+ -- primarily, how long will its production cuts last? -- remain. Members will meet in early March, when they will discuss current output levels.