Dealers work in front of monitors at Hana Bank in Seoul on Feb. 2. South Korean stocks have been on a tear, getting a major boost from younger retail investors. They are now bracing for the end of the country's unprecedentedly long ban on short selling, the lifting of which they have vehemently opposed.   © EPA/Jiji
Market Spotlight

SEOUL/POHANG, South Korea -- When a group of young women met over bubble tea at a cafe in Pohang, South Korea, last week, there was a hot topic of conversation -- the stock market.

"I bought shares in Naver and AmorePacific recently. But I won't buy Posco because it is still at the bottom," said one. Trading is "simple and easy," the woman, in her 20s, told one of her friends. "You can search for brokerage houses on the internet, like Kiwoom, and open your account there." Kiwoom Securities is the country's biggest online brokerage house.

Feverish interest from young retail investors like these is leading South Korea's equity market to giddier heights. The benchmark Kospi is up more than 30% for the last three months, surpassing 3,000 points for the first time in January. Half of new small investors since March last year are aged under 40, according to Korea Capital Market Institute which quoted data from major brokerage houses.

For many, who have lost the hope of securing quality jobs amid the coronavirus pandemic and sluggish economic growth and are struggling to afford a place to live amid soaring housing costs, the rising market seems to offer a rare chance for financial security.

Now this enthusiasm is set to be tested by something this army of retail investors have lobbied hard, yet fruitlessly, against: the impending end of South Korea's unprecedentedly long ban on the short selling of stocks. Regulators are to lift the prohibition in May. 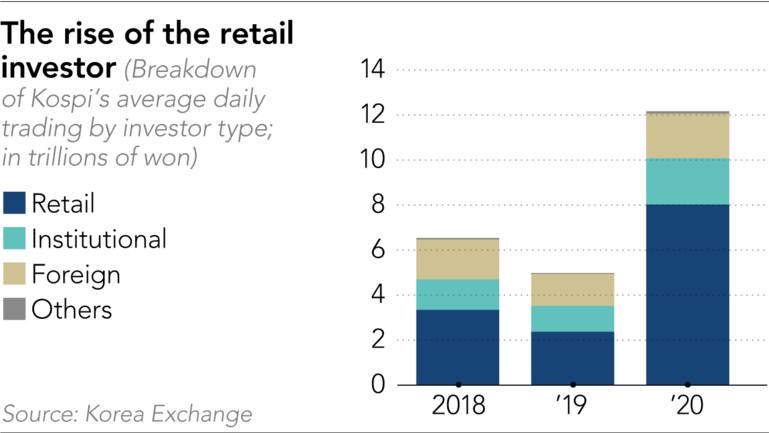 Short selling of a stock is, in effect, a bet that its price will drop in the future. To do so, an investor borrows a company's stock for a small price and sells it, with the expectation of buying it back more cheaply and pocketing a profit before having to return it to its original owner.

South Korea banned the practice last March, part of an attempt to calm markets that were plummeting as the extent of the coronavirus pandemic became apparent. But it has persisted even as markets have continued to rise. South Korea is the last major market with such a ban.

The short-selling proscription has become an article of faith for hundreds of thousands of individual investors, giving them more confidence to invest. They say it is a tool to help them compete in markets that would otherwise be tilted in favor of institutional and foreign investors.

"So far, foreign and institutional investors have used short-selling schemes, designed to benefit them, as their key weapon," said Jeong Eui-jeong, head of the Korea Stockholders' Association, on Feb. 1. "Retail investors lost money due to short selling in the past. That's why people said if you do stocks, you will be bankrupt."

More than 200,000 people even signed a presidential petition in January, asking for a permanent short selling ban and threatening an "unimaginable" backlash against the government and ruling Democratic Party if they did not meet the demand. But their plea went unheard. On Feb 3. the regulator decided to allow short selling on 350 stocks in the Kospi 200 and Kosdaq 150 indexes -- including heavyweights such as Samsung Electronics, SK Hynix, Naver and Celltrion Healthcare -- from May. The Kospi 200 accounts for 88% of the market's entire capitalization.

Eun Sung-soo, chairman of the Financial Services Commission, said short selling is a feature of advanced markets. "It is hard to ban short selling completely or permanently... it is a global standard and our capital market is [internationally] connected," Eun said at a news conference.

In some ways South Korea's end to the ban runs counter to one of the most striking trends in markets this year. U.S. retail investors have had short sellers on the run, forcing up the price of American video game retailer GameStop and other assets via concerted online campaigns.

But experts and international financial institutions say short selling has many benefits in the market, including working to counter asset price bubbles and helping investors find rotten apples among companies. They also say that it is fairer to let investors bet that stocks will fall.

"Investors are either optimistic or pessimistic on stocks. Pessimistic investors do short selling, but if it is prohibited there's no place to reflect negative perspectives. That raises bubbles in the stock price," said Lee Dong-yeop, a professor of business at Kookmin University in Seoul. The International Monetary Fund had recommended that Seoul resume short selling, saying financial conditions had stabilized and that it would make investors more sensitive to risk. Foreign investors also said a short selling ban would undermine competitiveness in Seoul's stock market in the long term as global investors could not use it to hedge risks.

Now the question is whether the return of short sellers to the South Korean market will have a significant impact on prices -- with some experts looking to experiences overseas.

"In other markets the impact of lifting a short selling ban was limited," said Nam Gil-nam, a senior researcher at the Korea Capital Market Institute. "In Spain, Italy and Malaysia, stock indexes fell right after the lifting, but their volume and span of time were limited."

Celltrion, South Korea's leading biopharmaceutical company, was the most shorted stock in the Kospi before the ban, with 9.35% of shares shorted. Its shares dropped 1.73% on Thursday, one day after the regulator decided to lift the prohibition. For Samsung Electronics, just 0.17% of its shares were shorted, while for Hyundai Motor the figure was 0.43%, according to Check Expert+, a stock market terminal run by Koscom, a subsidiary of the Korea Exchange.

According to the Finance Ministry, an average household's monthly surplus jumped 15.3% to 1.3 million won ($1,150) in the third quarter from a year ago.

"Retail investors have more room to invest in the stock market as their consumption fell during the pandemic while their disposable income increased," Nam said.

If that is so, investors like those in the bubble tea cafe in Pohang may yet see further upside in the market -- but professionals with a contrary view will also be free to test it.