The market capitalization of Sea, a Singapore-based company that operates the e-commerce site Shopee, mainly in Southeast Asia, surged more than fivefold in 2020, driven by growing demand for online shopping under the COVID-19 pandemic. (Source photo courtesy of the company)
Market Spotlight

Sea and BYD biggest winners among major Asia stocks in 2020

Thanks to worldwide monetary easing and fiscal stimuli that generated money for investment, global stock markets have recovered faster than real economies. Such a development created some high-flying Asian companies that investors hoped would become the next Tencent Holdings or Alibaba Group Holding -- Asia's two most valuable companies, each now worth around $700 billion.

The best example was Sea, known for its Shopee e-commerce platform in Southeast Asia. Its market capitalization grew more than fivefold this year to $102 billion, making it the region's most valuable listed company. That growth rate is No. 1 among about 500 major Asian companies that had a market cap of over $10 billion at the end of 2019, according to QUICK-FactSet data as of Dec. 22.

Sea's three pillars -- e-commerce, online gaming and e-payment -- all benefited from the pandemic, and it continued aggressive marketing to capture market share. Being a rare Southeast Asian tech startup listed on the New York Stock Exchange, it attracted U.S. investors who see high growth potential in the region.

Moreover, Sea won a digital bank license in Singapore earlier this month, which would unlock more fintech opportunities for the company, further boosting its shares. 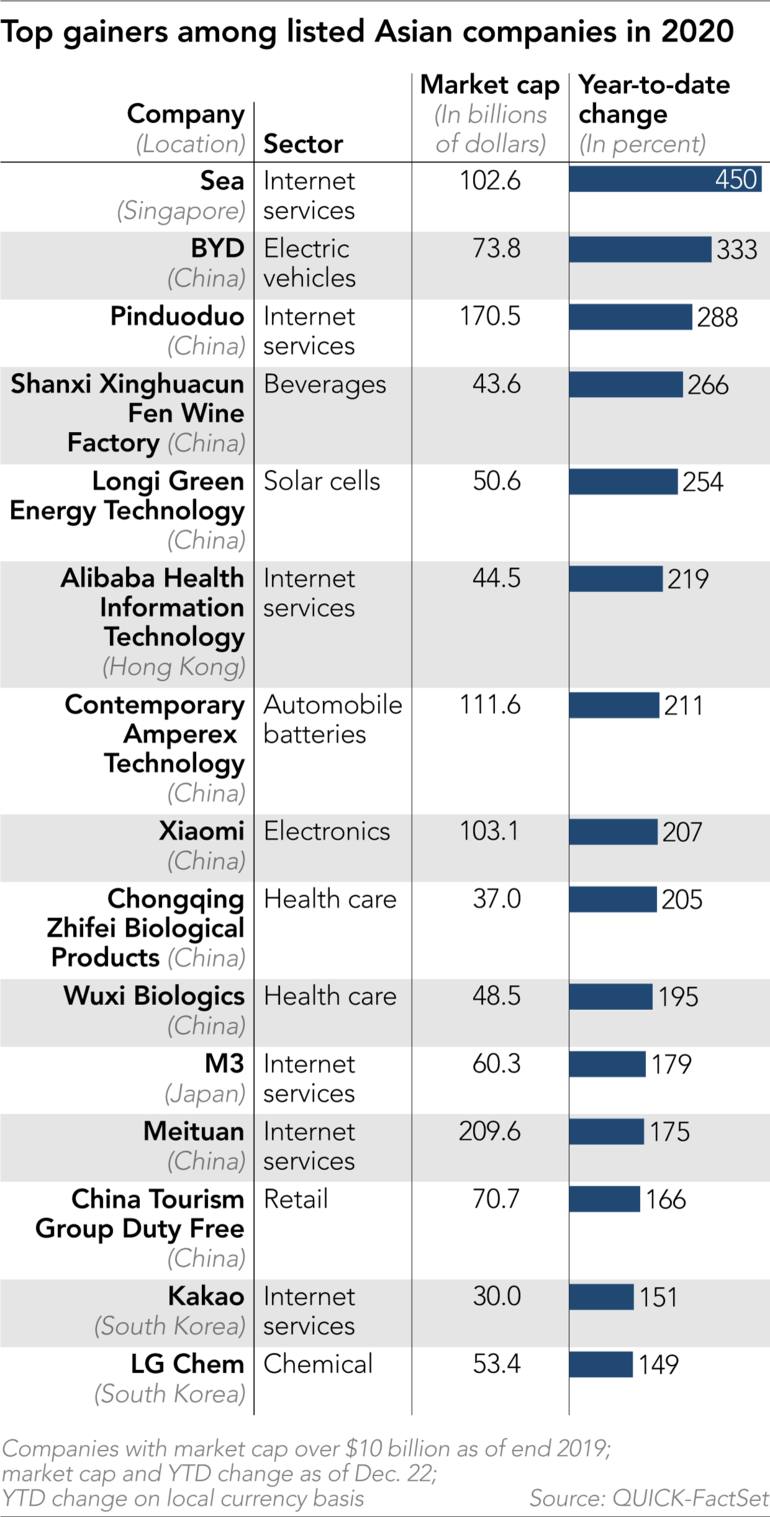 Similarly, Nasdaq-listed Pinduoduo, known for its generous group-buying discounts, is among a handful of Chinese e-commerce companies that benefited from surging demand during the pandemic, with its market cap nearly quadrupling to $170 billion.

Online sales for the company remained strong even after the pandemic was largely contained in China. During the July-September quarter, Pinduoduo's revenue climbed 89% to 14.2 billion yuan ($2.1 billion) from a year earlier, and its net loss narrowed to 784.7 million yuan from 2.34 billion yuan in the same quarter last year.

"Information technology was no doubt the best-performing sector in 2020, and this trend could carry into the next year because consumer behavior has been reshaped by COVID-related travel bans and lockdown measures," said Margaret Yang, a strategist with DailyFX in Singapore. "This could have a long-lasting impact on consumer behaviors and preferences."

Asia's second-biggest gainer, BYD, increased its market capitalization by 333%. The Shenzhen-based automaker, which has had Warren Buffett's backing since 2008, has significantly improved its deliveries as China recovers strongly from the pandemic. In November, it more than doubled the sales of electric vehicles from a year ago, and now has the largest share in China's EV market. 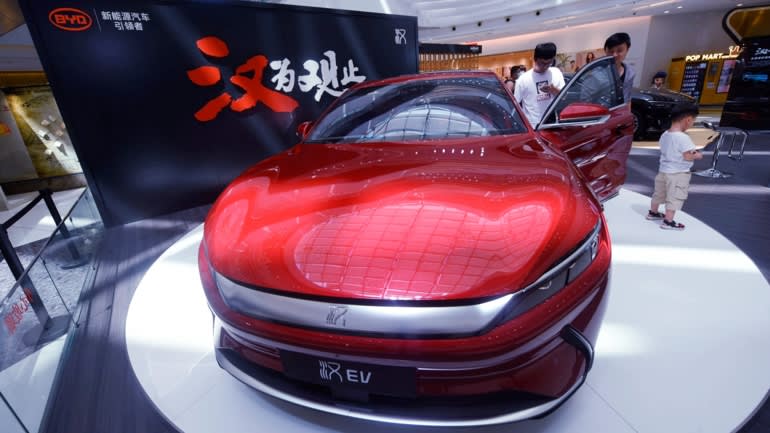 A BYD electric sedan is displayed at a shopping mall in Hangzhou, China. The Shenzhen-based automaker's market cap has surged over 300% in 2020.   © AP

Investor confidence has also been boosted by a breakthrough in BYD's battery business. The Blade Battery it had been developing for years was launched in 2020. The battery can increase energy density by at least 30% and reduce costs of raw materials by 30%, according to the company.

Other automobile battery makers also made the list of top winners. China's Contemporary Amperex Technology had its market cap more than triple to $111 billion, while South Korea's LG Chem saw its value soar 2.5 times. LG Chem's market share in EV batteries jumped to 25% this year, from 12% a year ago, as it targeted Europe.

Prospects are bright next year for LG Chem because the incoming administration of Joe Biden is expected to focus on the environment, which should raise demand for electric cars in the U.S.

Globally, the stock performance of Tesla showed investors' high expectations of EVs, with its market value rising eightfold to over $600 billion, far exceeding that of Toyota Motor, Japan's most valuable company.

The industrywide rally has also given rise to EV newcomers. The market cap of the Chinese EV startup Nio, which is not among the 500 major Asian companies because its market value was below $10 billion at the end of 2019, increased by 17 times to $74 billion -- higher than General Motors -- as its improved sales and delivery figures helped investor confidence.

After a plunge in March as the pandemic spread across the world and governments halted economic activities, stock prices have been on an upward trajectory since April after infections peaked in many countries. 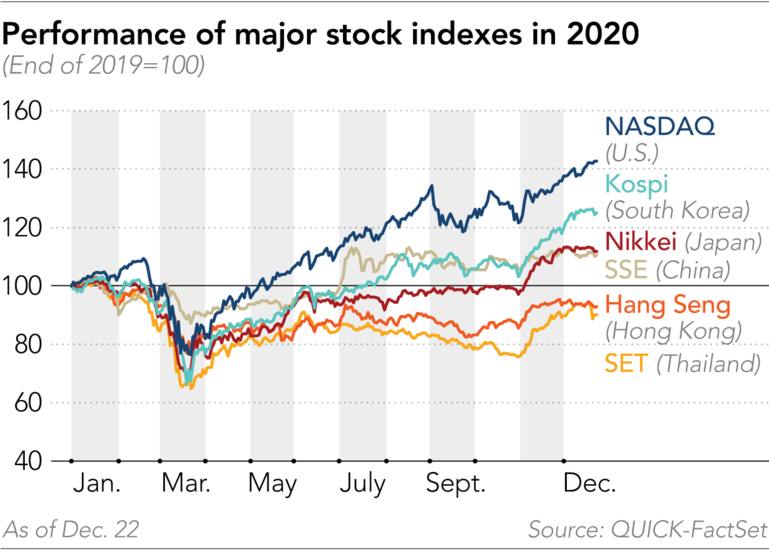 However, Southeast Asian markets, which do not hold many high-flying tech listings, generally underperformed, with Thailand's SET down 10%.

Five Asian companies made the list of the world's 20 most valuable companies: Tencent (No. 7), Alibaba (8), Taiwan Semiconductor Manufacturing Co. (12), Samsung Electronics (13) and Chinese liquor maker Kweichow Moutai (17). There were only four Asian companies in the top 20 at the end of 2019. TSMC and Kweichow Moutai are new entrants; Industrial and Commercial Bank of China fell off the list.

Some Asian companies rode on the stock market boom to go public this year, making blockbuster initial public offerings. China's KE Holdings, which listed on the NYSE in August -- the biggest IPO by a Chinese company in the U.S. this year -- is now valued at nearly $80 billion, almost eight times its value when Tencent and SoftBank Group invested in the company last year.

The company, also known as Beike Zhaofang, is the mainland's biggest online real estate transaction platform, earning revenues primarily from commission fees. Investors have been attracted to the company's business model, as it charges as much as a 3% commission on home sales while keeping overhead costs lower than under those for traditional property agencies. The company's adjusted net profit more than tripled to 1.86 billion yuan in the quarter ended September.

Meanwhile, Asian companies in traditional sectors like energy and transportation lost significant market value this year as their core businesses were hit hard by travel curbs and other pandemic restrictions. The market value of Japanese oil giant INPEX and Chinese state oil major CNOOC fell by 52% and 44% respectively, while that of West Japan Railway declined 47%.

Some analysts believe the bull run is not over. "The upward trajectory remains intact for the global stock market, albeit some technical pullbacks are possible into the first quarter of 2021," Yang said.

She pointed out that stock market valuations appear to be "overstretched" but the accommodative monetary environment and hopes about vaccines may continue to support a bull market in the medium term.

She said U.S. President-elect Biden could bring major changes to America's foreign policy alongside tax reforms. "Aside from that, the lingering impact of the COVID-19 pandemic, an uneven rollout of COVID vaccines around the globe and the ongoing U.S.-China spat are among the key event risks."

Additional reporting by Nikki Sun and Narayanan Somasundaram in Hong Kong and Kim Jaewon in Seoul.