The stock market in Sri Lanka continues to climb despite a disconcerted public beset with rising prices and shortages of daily goods. (Source photo by AP)
Market Spotlight

COLOMBO -- Two weeks ago, Sri Lanka's share index hit 11,000 for the first time, capping a busy trading day at the Colombo Stock Exchange. But outside on the capital's streets, thousands marched in protest against the country's spiraling cost of living amid shortages of gas, sugar, milk powder and other essentials.

Sri Lanka's foreign exchange reserves are running desperately low, sinking to $2.27 billion as of Oct. 31 and forcing the government to limit imports and shut the country's only oil refinery. The three major global rating agencies have signaled concern the government could default on its international debts. The Sri Lankan rupee has reached all-time lows, trading around 202 to the dollar on Friday.

None of this is dampening the country's newfound enthusiasm for stocks. The number of accounts registered with the exchange's central depository system has climbed two-and-a-half times since the start of last year to 47,827. Over the period, the country's money supply has expanded by more than 42%, flooding the market with liquidity.

Many in the middle class have taken money out of their savings accounts to put into stocks, said Nimal Perera, chairman of investment company NP Capital Group.

"Due to the new generation of investors, we have a vibrant market now," he said. "The stock market is not related to the country's economy or politics. It is a totally different ballgame." 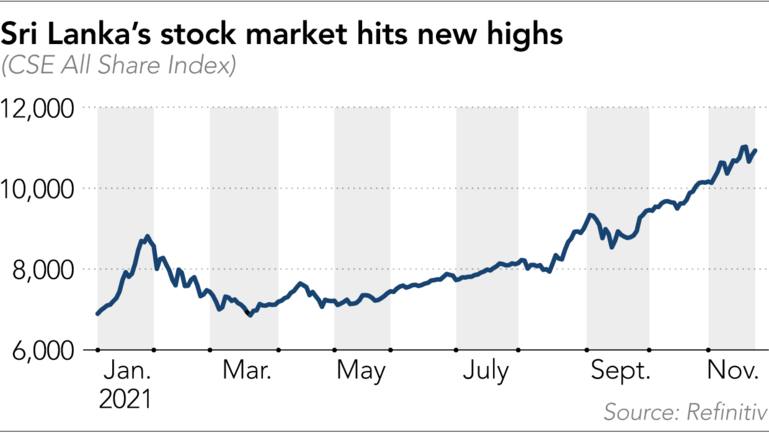 The pace of initial public offering activity has quickened, with five companies currently taking orders in their share sales compared to just one currently on the Stock Exchange of Hong Kong.

Kamal Bandara, a Colombo project manager, is one of the country's many novice investors.

"I started investing in September after a friend convinced me to invest as she has been making astonishing gains," he said. "I have made close to 1 million rupees!" Banker Harsha Jayalath, 36, dipped into the market earlier. "I have started trading for only about a year, and I have received a 40% return on my investments so far," he said proudly.

One of his best bets has been Expolanka Holdings, a logistics-focused company controlled by Japan's SG Holdings Group, the parent of Sagawa Express.

The company's profits soared 166% in the September quarter from a year before amid the global supply chain disruptions that have pushed up freight rates. It is now Sri Lanka's most valuable listed company, with a market capitalization of 482.86 billion rupees, thanks to a near-700% gain for the year so far.

Jayalath also invested in Browns Investments, a holding company whose shares have more than tripled this year.

Browns is one of five companies under conglomerate LOLC Group now in the country's top 10 stocks by market cap. Alongside Expolanka, the other four LOLC companies -- led by Commercial Leasing & Finance's climb from 4 rupees a share to 65 rupees -- make up the market's top gainers for the year to date. (Japan's Orix was the group's second-largest shareholder until it abruptly sold its 30% stake in 2018.) 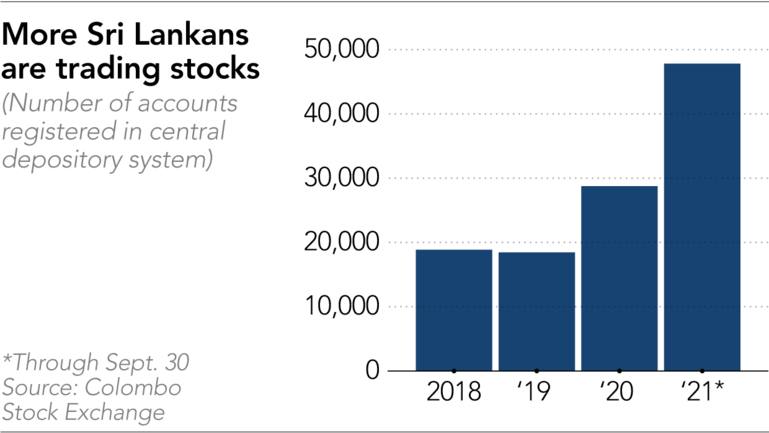 As in the U.S. and other countries that have seen a retail stock trading boom during the coronavirus pandemic, previously low-profile shares like Commercial Leasing have gained favor as new investors trade tips via messaging apps and chat groups.

Traditional blue chips have fallen by the wayside, with Ceylon Tobacco -- the most valuable company at the beginning of the year and a unit of British American Tobacco -- now ranked only sixth, with its shares down 12.6%.

Still, the Ceylon Index Fund, which tracks 10 leading blue chips, has been the country's best-performing stock fund this year, up 87.2% according to Ceylon Asset Management General Manager Shermila Perera.

Optimism that conditions will improve further next year with the completion of several major infrastructure and development projects are adding to the momentum.

"2021 has been a turnaround year," he said. "The stock market is reflecting the positive GDP growth. The export sector has really bounced back."

"We are very confident Sri Lanka has turned the corner. Many things are falling into place next year," he said, noting that in price-to-earnings terms, the market's overall valuation is only about half what it was a decade ago, leaving room for further gains.

"People have seen the corporate sector come back to life," he added. "There is a lot of retail confidence in the economy. Sri Lankans know what is happening in the economy." 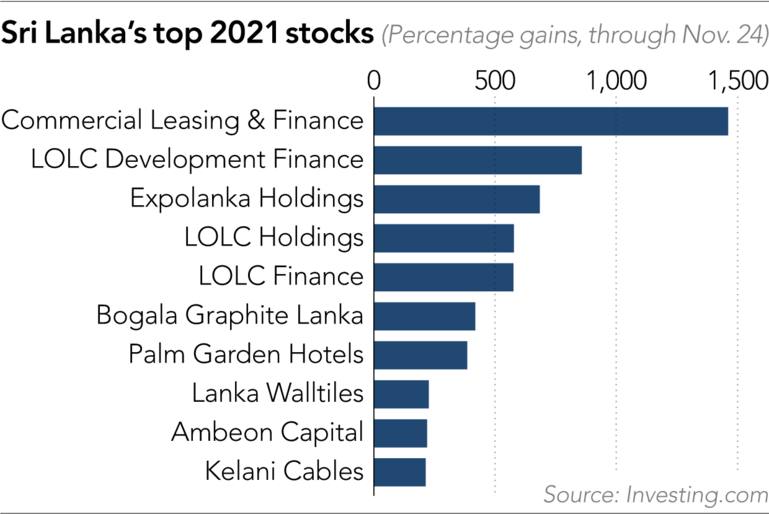 The government has tried to sell overseas Sri Lankans on the notion of joining the rally, which could help shore up the country's foreign reserves.

"The time is now for you to take up positions," Central Bank of Sri Lanka Gov. Ajith Nivard Cabraal told an investor forum in Dubai this month. "We still have a lot of potential for the stock exchange to grow."

So far, foreign investors have sat out the rally, shaken by the rating agencies' warnings and worries the rupee could be due for another big fall.

Ruchir Desai, a manager of the Hong Kong-based Asia Frontier Fund, said he has been surprised by how much Sri Lankan investors have been willing to overlook economic warning signals. "Now you have probably the worst macro position ever," he said.

Desai's fund, which invests in 16 regional markets, has held still on its positions in Sri Lankan blue chips for nine months. He believes Colombo's rally will run out of steam when the central bank starts to raise rates to cope with rising inflation.

"Then I think this party will end," Desai said.

Dimantha Mathew, head of research at Colombo investment bank First Capital Holdings, is worried too many of the country's 21 million are missing out on the liquidity-driven rally.

"The government uses this money to pay for the infrastructure drive, and it will come into the economy and it will be with the high-level corporates and high net worth individuals, as well as with the upper and upper-middle class," he said. "The gap between rich and poor increases during an economic crisis."