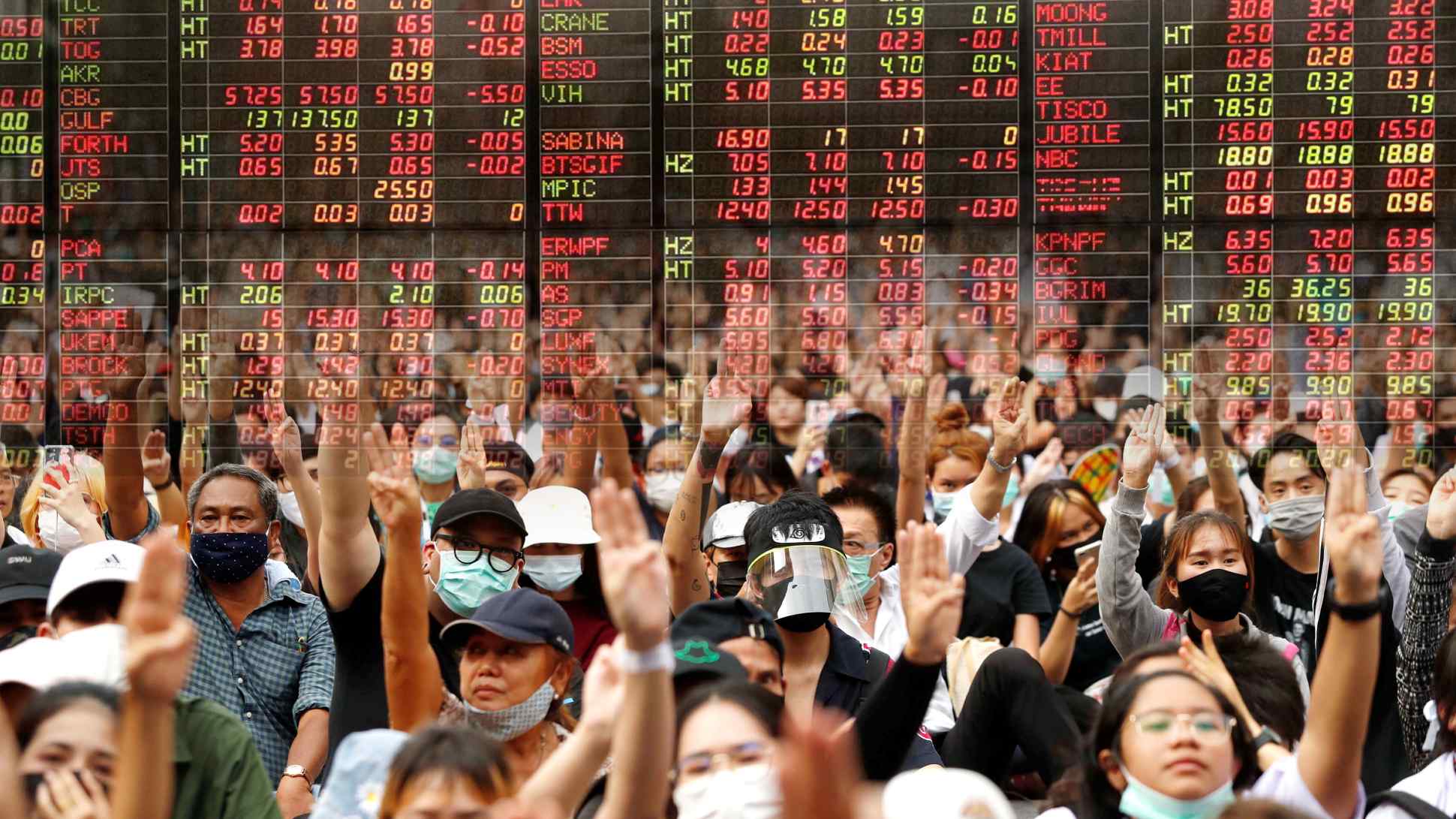 Nationwide protests have rocked the government and roiled the economy, but IPOs in Thailand appear to be unscathed by the turmoil. (Source photos by Reuters)
Market Spotlight

Investor demand drove shares for SCG Packaging, which plans to use the funds to expand into Southeast Asia, toward the high range of its initial public offering price. Shares rose 6.4% at one point to 37.25 baht from the opening.

The float marked the bourse's seventh IPO this year -- the most of any exchange in the region. Yet the bourse's benchmark index is slumping, weighed by political tensions between young protesters and Prime Minister Prayuth Chan-ocha.

Stellar IPOs and a falling index may appear to be at odds, but market watchers say they could make good bedfellows.

The Thai government's mishandling of the protests has prompted a second wave of selling this year for Thai stocks, driving the country's benchmark SET Index to a 6-month low. Performance over the past three months has been the worst among major Asian stock indexes. Large pro-democracy protests have been held almost daily in Bangkok since Oct. 14. Images of youths surrounding Government House on Oct. 14, blocking traffic on Oct. 15, and fending off water cannon on Oct. 16 were seen around the world.

From the outset of the pro-democracy movement, protesters have demanded the resignation of Prayuth and his cabinet, in addition to constitutional changes drafted by representatives of the people and reform of the monarchy -- but not its abolition. Demonstrators are also demanding that the government release detained leaders.

"The benchmark index fell sharply on the trading day after the government dispersed the crowd with water cannons, due to a psychological shock sale that triggered stop-loss moves on the Stock Exchange of Thailand," said an analyst at Asia Plus Securities.

The SET index has dropped 11% to around 1,205 since mid-July when the pro-democracy movement really took off. It is approaching the lowest level since March, when the coronavirus shook the market.

A drop in share prices reflects the questionable judgment of the government, which has let the situation spiral out of control and spill over into the economy. Prime Minister Prayuth declared a state of severe emergency on Oct. 15, banning assemblies of more than four people and giving authorities massive power to muzzle protesters. A protester shows a placard with their demands for the government.    © Reuters

In an effort to lower attendance at rallies, the police halted some public transportation and asked a number of transit operators to stop servicing key stations. But the demonstrators worked around this, using motorcycle taxis and ride-hailing services to get to rally venues. Others simply walked.

About the only thing the measures accomplished was to hurt businesses such as skytrain operator BTS, whose stock price fell over 10% since Oct. 14.

Demonstrations are now being held sporadically in Bangkok, disrupting traffic around rally venues and forcing nearby businesses like shopping malls to close. The government wants people to spend more to help offset the loss of revenue from the lack of foreign tourists, but some are staying home and saving their money for what could be more difficult times ahead.

Prayuth's revocation on Thursday of the emergency declaration may make it appear that the government has caved to protesters' demands. But it could also mean a more pragmatic approach for dealing with popular sentiment.

It is still unclear how big a headwind the protests will create for Southeast Asia's second-largest economy, which is expected to contract 7.8% this year, due largely to a sharp drop in foreign tourists and weak consumption. The largest contraction in history was 7.2% in 1998 during the Asian financial crisis.

"Protracted political tensions could reduce the credibility and effectiveness of the institutional framework, particularly if they hamper authorities' ability to effectively execute macroeconomic policy," Moody's Investors Service said on Wednesday.

In the past three months, major Asian stock indexes have been mixed, according to QUICK-FactSet. Indexes rose in India, South Korea and Japan but fell in Thailand, Malaysia and Singapore. The SET fell over 10.5% -- far worse than Malaysia at 7% and Singapore at 2.2%.

Thailand has myriad economic issues that require swift action, including reforms targeting an aging population and improving labor skills. It also needs to reduce dependency on external demand, including exports and tourism, both of which are subject to the whims of international markets.

But efforts to address these issues have often been disrupted by bureaucracy, corruption and changes in government. Most recently, a cabinet purge of former economic ministers created uncertainty about economic policy. Foreign investors have all along doubted the ability of the former junta and current administration to steer the economy. According to data from the Institute of International Finance, nonresident investors have been pulling big money from Thai equity markets since 2018. But the outflow started much earlier and is much larger compared to other emerging markets.

"Foreign investors were buying stocks in China and India," said Apichat Poobunjirdkul from Tisco Securities. "They also shifted to Thai bonds, which are considered safer assets," he added.

Individual domestic and institutional investors have been the major buyers of Thai stocks, thanks to excessive liquidity provided by the central bank.

But contrary to underperforming shares, Thailand's stock market has been leading Southeast Asia's IPO boom. According to SET, the cumulative value of IPOs reached $3.1 billion in the first nine months of 2020, topping the $2.7 billion recorded through all of 2019. Post-coronavirus IPOs in Thailand kicked off with medical glove-maker Sri Trang Gloves. Since last year, there has been a clear trend in Thailand for leading conglomerates to list subsidiaries to eke out more growth. Thursday's listing of SCG Packaging follows this pattern.

"There's only a small chance for indexes to rise sharply," said an analyst at KGI Securities. With such scant opportunity from trading or holding shares, investors are looking to profit from companies going public.

"I think it's a good time for IPOs, as investors are watching out for them," he said. "Sometimes new stocks can rise quickly and generate more than 50% return, [which is] hard to get with already listed stocks."