TOKYO -- The Tokyo Stock Exchange is reviving its ambitions to become a magnet for Asian technology companies after approving an initial public offering by a high-profile startup from Taiwan.

Appier received the greenlight to list on TSE's startup-focused Mothers board and is scheduled to make its trading debut on March 30. Established in 2012 and led by CEO Yu Chih-han, Appier sells software that helps companies target online shoppers by crunching data using artificial intelligence. An e-commerce company, for example, can send promotions tailored to an individual user to discourage him or her from switching to a rival shopping site.

Appier has operations in 15 markets and reported revenue of $84 million in 2020, a 27% increase over the previous year.

The company plans to raise 14.5 billion yen ($132 million) from the IPO, giving it a valuation of about $1.5 billion, based on its offering price of 1,600 yen per share. It will be the first startup from Taiwan to list in Japan since security software firm Trend Micro, founded by entrepreneur Eva Chen, went public in 1998.

"This is a historic event for Taiwan startups," said Yoshiyuki Shibusawa, president and CEO of JAFCO Asia, an investor in Appier. "There are global Taiwanese companies in hardware, such as TSMC. But in the software industry, Appier is at the top of the startup ecosystem. It is a role model for entrepreneurs."

Advocates hope that a successful listing by Appier will pave the way for more promising tech startups from Asia seeking an IPO in Japan and bring in more capital from both domestic and overseas investors. It would also boost the clout of Japanese venture capital firms, which lack the firepower and prestige of U.S. and Chinese rivals but have an edge on advising startups on going public in Japan.

With nearly $30 billion in average daily trading volume, TSE appears well positioned to meet the financing needs of companies in markets like Southeast Asia and Taiwan, where local stock markets are less developed. Yet such cases have become extremely rare -- only four foreign stocks are traded on TSE. By comparison, more than 200 companies from China alone are listed in the U.S. 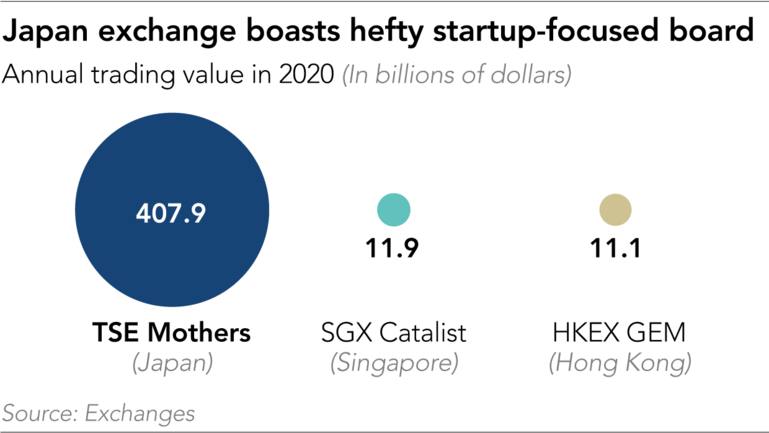 The lack of foreign companies on the TSE is a reflection of Japan's dwindling economic prowess. But critics also point to the exchange's own past missteps. The bourse lured several emerging Chinese companies in the mid 2000s, but most performed poorly. One of them, Asia Media, was delisted amid suspicions of financial misconduct, triggering backlash toward the bourse for what was seen as a lack of oversight. Japanese underwriters stopped pursuing deals in China.

But the TSE has been reviving its international ambitions in the past few years, with its confidence boosted by the growing number of local tech startups that went public on the Mothers board. It is also facing the growing threat of the Shanghai Stock Exchange's Science and Technology Innovation Board -- dubbed China's answer to the tech-heavy Nasdaq exchange in the U.S. Launched in 2019, the Star market, as it is known, already has more than 230 listings, fast closing in on the Mothers' 352.

TSE officials began pitching the idea of listing in Japan to startups in Asia, traveling across the region to organize seminars with underwriters and audit firms. Japanese venture capital firms that invest in Asia, such as JAFCO, also began advising its portfolio companies.

The biggest appeal of the TSE is the large number of retail investors, who buy nearly 90% of shares offered in IPOs on Mothers and account for more than half of overall trading on the board. Their strong appetite for IPO stocks generally helps companies fetch an attractive valuation when they list. The number of companies listed on Mothers is smaller than on the Hong Kong Exchange's equivalent, the GEM board. But the total market capitalization of Mothers is more than three times larger, and trading volume is more than 10 times larger.

"The depth of investors that have a desire to buy startups will determine the winners and losers," said Hidetoshi Nagata, head of global listing at the TSE. 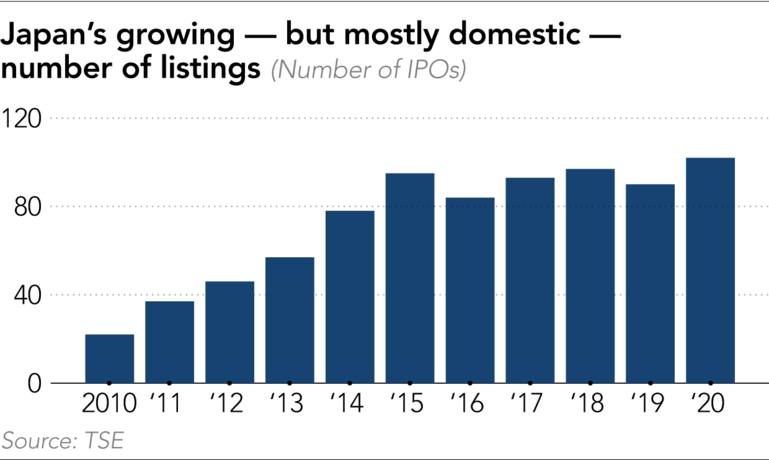 The tech-focused Mothers board has also performed better than the broader Japanese market during the coronavirus pandemic. The Mothers composite index rose 33% in 2020, compared with 4.8% for the Topix.

Skeptics are doubtful, however, that foreign listings will become a trend. Appier's listing involved years of preparation that included a process dubbed "inversion" which made Appier's Japanese unit the parent company. Appier said selling shares of a Japanese entity has "affinity with Japanese investors." Some observers said the move was also aimed at easing the burden on the TSE in terms of the screening process, as well as to avoid violating Taiwanese regulations that prohibit companies domiciled in the country from listing overseas first.

But Japan, where the corporate tax rate is higher than countries in the region like Singapore, is not an appealing place to be domiciled.

Another major bottleneck is the lack of financial professionals. Appier's large offering size gave an incentive for underwriters, who take a cut from the total offering, to take the deal even if it required more work than a domestic IPO. They would be less inclined to compete for smaller IPO deals, especially amid a startup boom domestically. The lead underwriters, SMBC Nikko Securities and Mizuho Securities, declined to comment.

Nevertheless, Nagata hopes Appier's listing will start to open up the industry. "It is an opportunity for underwriters to gain know-how. If they get experience, the next deal will become more attractive. "