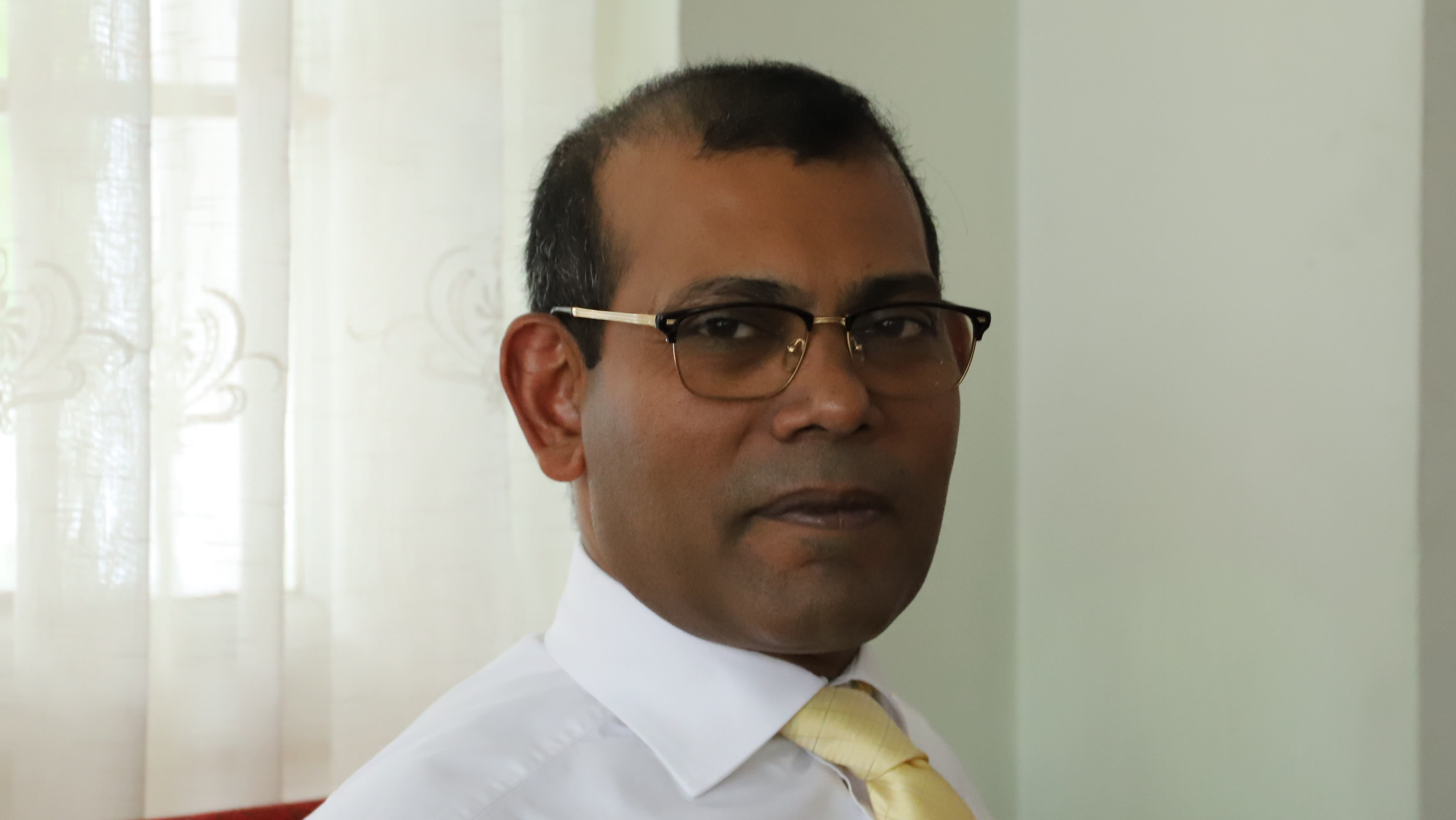 COLOMBO, Sri Lanka -- Massive debts threaten to force the Maldives to cede territory to China as early as 2019, former President Mohamed Nasheed said, warning that a flawed presidential election this year would lead to a Chinese takeover of the island nation.

"We can't pay the $1.5 to 2 billion debt to China," Nasheed told the Nikkei Asian Review in an interview in Sri Lanka. He argued that the Indian Ocean country, known mostly as a tourist destination, takes in less than $100 million a month in government revenue.

Nasheed, who held office from 2008 to 2012, fled to the U.K. in 2016 following his arrest and conviction under anti-terrorism laws for ordering the arrest of a judge. He now splits his time in exile between there and Sri Lanka.

As of January, obligations to China accounted for "nearly 80%" of the Maldives' foreign debt, according to Nasheed. Much of the money went into infrastructure, including roads, bridges and airports. But these are "vanity projects," according to Nasheed: "roads going to nowhere, airports that [will sit] empty." All the while, the Maldives' debts are accruing interest at high rates, Nasheed said.

The country must start making payments on this debt by 2019 or 2020, according to the former leader. If the Maldives falls behind, China will "ask for equity" from the owners of various islands and infrastructure operators, and Beijing will then "get free hold of that land," he said.

"Without firing a single shot, China has grabbed more land than the East India Company at the height of the 19th century," Nasheed said, alleging that the Asian economic powerhouse has taken over "16 islands already" under the Maldives' current president, Abdulla Yameen. "This land grab exercise hollows out our sovereignty," he argued. Nasheed did not provide any names of the islands he alleged China had taken. This sign marks the site of a Chinese-financed project to build a bridge connecting the Maldivian capital of Male with a nearby airport island. (Photo by Yuji Kuronuma)

Once ports have been built on the islands, "these commercial infrastructures can very easily become military assets," according to Nasheed. Such conversions are "very simple," he said, pointing to a naval base China established in the East African nation of Djibouti last August -- its first military installation abroad.

Yameen's Chinese-backed government has cracked down on political opposition over the past several years. But on Feb. 1, the Maldives' Supreme Court tossed out Nasheed's conviction and ordered the release and reinstatement of opposition lawmakers. The government responded by declaring a state of emergency and throwing two justices in jail. The rest of the court has since reversed its decision, and the government has sent envoys to China and elsewhere to garner international support.

Nasheed on Feb. 6 urged India to send a military-backed envoy to resolve the crisis. New Delhi has responded by increasing its naval presence in international waters around an hour from the Maldivian capital of Male but has shied away from stronger steps. Though the former president said he would leave military strategy to the "professionals," he insisted that the Maldives needs "assistance."

"We need to release the judges," he said. "We need the government to abide by the court ruling." Not everyone in Male would be comforted by the sight of Indian troops on the streets. But "India is not an occupying force," Nasheed said. "It is a liberating force."

Ask any Maldivian whether they want the crisis resolved, and "they will say yes," he argued.

The Maldives is set to elect its next president in August. Nasheed did not say whether he intends to run. But "we think that if we don't have this election free and fair, China will take over the Maldives," he said. "That will be a big threat to the entire Indian Ocean," he said.