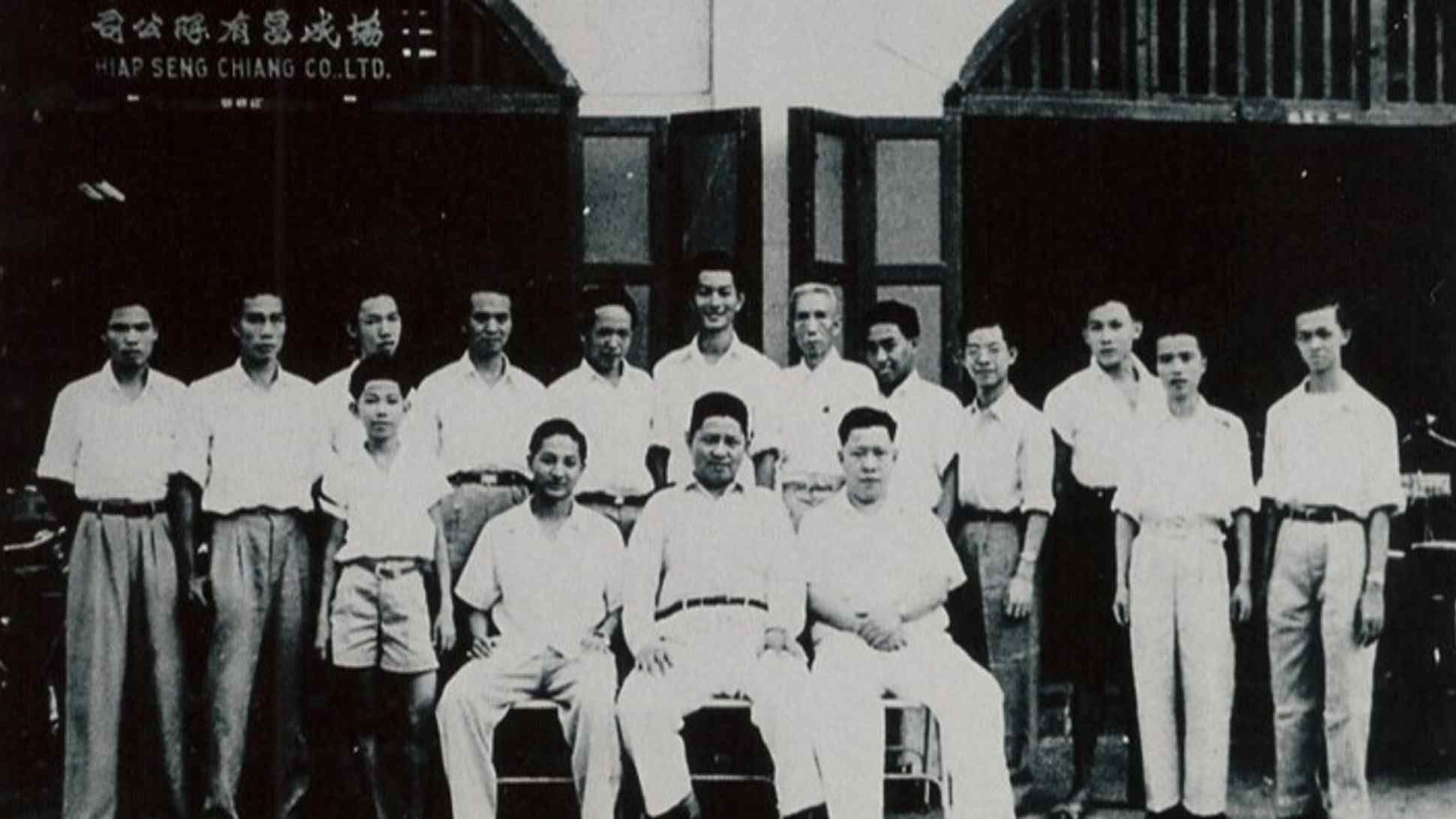 Around the time when auther's father (center, front row) established his own store.
Boonsithi Chokwatana

Boonsithi Chokwatana is the Chairman of Saha Group, Thailand's leading consumer products conglomerate. This is part 5 of a 30-part series.

In 1942, in the middle of the war, my father became independent from my grandfather and established his own general store. This was the beginning of what is now the Saha Group.

In those days, trading companies from Europe and Japan, such as Mitsui and Mitsubishi, had branches in Bangkok. My father frequently went to these companies and formed connections.

When the goods came in on the boat, they were divvied up and sold on Samphen Road in Bangkok's wholesale district. Goods were scarce then, so shoes, belts, shirts and similar items all sold quickly.

Japanese ships importing rice and other commodities from Thailand would load up with various other products to make use of their empty cargo space on their journeys to Thailand. The most popular was dried, shredded squid from Hokkaido. Chinese squid were also coming into Thailand, but the quality of Japanese products was better.

After the war, it became possible to import goods directly from foreign countries. My father turned his focus to China. My grandfather had two wives -- one in Thailand and one in China. My father was born in Thailand, but his half brother lived in Shantou, Guangdong Province. In those days, all business was based on trust. My father used his family connections to purchase a variety of products.

The bestselling product was Chinese medicine. We also handled running shirts and canned goods, and Chinese seasonings like soy sauce and peppercorns were popular among overseas Chinese for a "taste of home." Agricultural products like mung beans and tapioca powder, which had not yet been cultivated in Thailand, were also popular.

In 1946, my father's store established its first overseas branch, in Hong Kong. The company brought plastic artificial flowers, belts, towels, toothbrushes and more to Thailand. Hong Kong had become a major producer of general goods because of the many Chinese who had fled the war.

In the early days of my father's business, the first floor of the building was a warehouse, and we lived on the second and third floors. When the dried squid from Japan came in, it stunk up the whole building; it was unbearable. Instead of formal meetings, we would have lively discussions with the employees while having lunch or dinner prepared by my mother.

Ten years after the company was founded, annual sales had grown to 30 million baht, and there were 50 to 60 employees. To prepare for further growth, my father reorganized the company and changed its name to Saha Pathanapibul.

It was 1952, and Thailand's economy was in a rough patch. The baht had depreciated dramatically, which cut into Saha's import profitability and resulted in a deficit of 1 million baht.

But the company did not cut any employees, and it paid their bonuses. "Because revenue in trading is unstable, we kept the salary levels low," my father later said. "In that sense, employees have a right to receive their bonuses. If we cut back too much on that, morale will suffer."

My father maneuvered the company through its first crisis on his own. He learned the importance of currency hedging, and he developed his knowledge about how to respond to changes in the external environment.

The idea of avoiding workforce reductions, even in times of financial difficulty, continues to be a part of Saha's corporate culture.

My father also recruited young talent. The first of these hires was Damri Darakananda who joined when the company was reorganized into Saha. He is my mother's younger brother and my uncle.

Two years later, when he was 20, Damri was promoted to the No. 2 position. The recklessness of the recruiting policy drew criticism in the Samphen wholesale district, and at one point there was a boycott of Saha's products.

But my father was convinced that the younger generation could think more flexibly about responding to changing trends and introducing new products.