After sightseeing around Europe, I settled into a loft in a cheap Paris hotel

Our luxury-filled boat trip finally ended, and all at once we were pulled back into the real world. 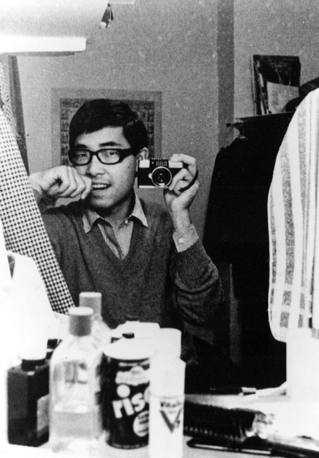 Me in front of a mirror in my room

Mitsuhiro Matsuda and his wife had made arrangements to go to Paris from Marseille by plane. Because I had lots of luggage, I decided to travel by train. The Marseille train station on New Year's Day was jammed with travelers.

"Where are my bags?" I asked the station staff in faltering French. I was unable to make myself understood, and their responses were equally unintelligible to me. Since they couldn't speak English, I was getting nowhere. By the time I finally tracked down my bags, it was time for my train to depart. I sprinted down the platform at full speed and just managed to leap onto the rearmost carriage just as it began to move. I had made it by the skin of my teeth.

By the time we finished watching the shows of gorgeous haute couture for the upper class, we were completely overwhelmed

The train to Paris was packed, the aisles filled with passengers unable to sit down. I had purchased a first-class ticket, but because I was carrying such big bags, I was unable to make my way to my seat. Having no other choice, I made the trip to Paris sitting on top of my luggage.

It was New Year's night by the time the train pulled into Lyon station in eastern Paris. I was certain I would see the brilliantly lit city that always appeared in the movies, but the station building was dark and sooty, and the area in front of the station was completely dark.

"Is this really the gay city of Paris?" I wondered. "Will I really have to live in such a dull place?"

My first impression of Paris could not have been worse. With a gloomy feeling, I hailed a taxi and headed toward a hotel in the Latin Quarter, which was the students' quarter. The Matsudas, who had arrived in Paris earlier, were waiting for me.

After such a lonely, solitary journey, I was finally able to relax and feel at ease.

Beginning the following day, we set out energetically to explore Paris. We visited the Eiffel Tower, the Arc de Triomphe, the Place de la Concorde, the Champs-Elysees and the Louvre. This may have been the typical tourist route, but nevertheless it had an air of real character compared with Lyon station.

I found that even within Paris, each district has its own personality. We were like sponges, soaking up everything we saw and heard each day.

Beginning in late January, we visited neighboring countries, including Spain, Italy, Germany and the U.K. I was intoxicated by the passionate flamenco dancing and appreciated the many works of art in the Prado Museum and Uffizi Gallery. Carnaby Street in London was overflowing with vitality and excitement.

We even ventured into the very heart of Paris fashion. We had a chance to watch shows by Christian Dior, Chanel and Pierre Cardin, all of whom I admired.

By the time we finished watching the shows of gorgeous haute couture for the upper class, we were completely overwhelmed.

"Kenzo, did you see those clothes? The carefully chosen materials, the sewing and cutting techniques, the sophisticated styles! They were really powerful."

"Really, there's absolutely no way I could create clothing like that. It's like night and day. Maybe I should give up on being a designer."

I was embarrassed. And to think, I had been proud of my modest fame in Japan.

Two months later, the Matsudas returned to Japan via New York. I remained in Paris by myself. To make my precious nest egg, which had to cover my living expenses, last as long as possible, I decided to move to a cheaper hotel near the Place de Clichy in the northern part of the city.

The room was a loft so small that seemed like a remodeled bathroom. But I could walk to the Champs-Elysees and the Rue Saint-Honore, where there were many boutiques. My rent was nine francs a day, which at an exchange rate of some 73 yen to the franc worked out to around 660 yen a day. It was cheap yet convenient location.

I bought a tabletop stove, food and daily necessities and lived simply, cooking my own meals at the hotel.

Keno Takada is a fashion designer known for his eponymous label Keno, which he left in 1999.