Headhunted almost immediately, I was soon living the high life in a plush apartment 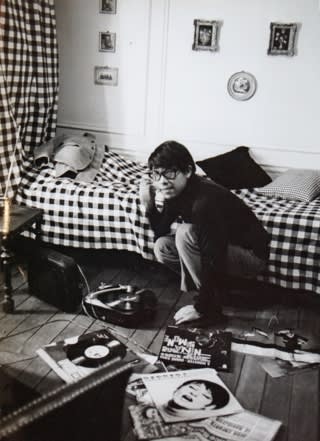 It was not a dream. I was selling my design sketches all over Paris. I was welcomed by the likes of Printemps, Galeries Lafayette and the magazine Le Jardin des Modes, with each one buying up numerous sketches.

Because I was just showing my sketches to people, it didn't matter that I wasn't fluent in the language. Moreover, by analyzing which drawings were selling, I could keep abreast of the latest trends. I continued selling with gusto.

"Will you come work for us?" This offer was put to me by the married couple who owned a dress shop I visited. They must have been quite taken with my design sketches. They offered me a monthly salary of 1,000 francs and said they would even help me get a residency permit and work visa.

It had been half a year since I had come to Paris. Getting hired meant I wouldn't have to worry about my visa expiring, and steady income would mean a more stable life. It was a godsend.

I quickly developed a reputation at the company as having a keen sense, and I was recognized as an immediate asset by those around me

My job was to sketch out designs for one or two dresses a day and create patterns for them. This was basically the same kind of work I had done at Mikura and Sanai. The "draping" method that Chie Koike, my teacher at Bunka Fashion College, taught me proved to be an immense help.

I quickly developed a reputation at the company as having a keen sense, and I was recognized as an immediate asset by those around me.

Another six months passed, and I was sounded out by a scout from another company. The woman was president of Relations Textiles, an information company that made trend projections for colors and fabrics and also handled apparel designs. The salary offered was 1,600 francs, and they would also provide me with a spacious apartment.

It didn't sound like a bad offer. In fact, it was so good it was almost scary.

The apartment was luxurious, boasting a guest room, living room and bedroom in addition to a bath, toilet, telephone, television and balcony. It was so big that one person would have been hard pressed to make use of it all. Less than a year after arriving in Paris, I had grown accustomed to being the kind of person who could live in a luxury apartment.

I was doing very well.

I purchased a Mini Cooper, and by day I worked at a company close to the opera, while by night I lived it up at the clubs and bars along the Champs Elysees and Saint-Germain-des-Pres. Eventually, I acquired a closet full of Renoma clothes and bought a Louis Vuitton suitcase and bags like those I had seen in movies and wanted so badly.

Paris is a mysterious city. It appears conservative, but it welcomes foreigners. It flexibly takes in outside talent and outside blood and transforms them into its own power. The free air there nurtured me. For that reason, I have almost no recollection of being discriminated against because of my race.

However, I did have one, and only one, absolutely unforgivable experience. It occurred when I was on my way to Belgium on business. I purchased a ticket in the first-class coach, took a seat and quietly waited for the train to depart.

Just then, a middle-aged Frenchman briskly approached me and began shouting at me. "What's an Asian doing in first class? Get out of here!"

He spat the words out and attempted to kick me out of the coach. I almost never raise my voice, but on that occasion I was incensed.

"Shut your mouth! I have a ticket to be here. Do you?"

I snapped back as if I was going to hit him, and the man flinchingly left the train. There is in everyone a place that must be protected. When that place is violated, a person will fight tooth and nail, regardless of the foe.

For the first time, I became aware of my own unexpectedly strong fighting instinct.