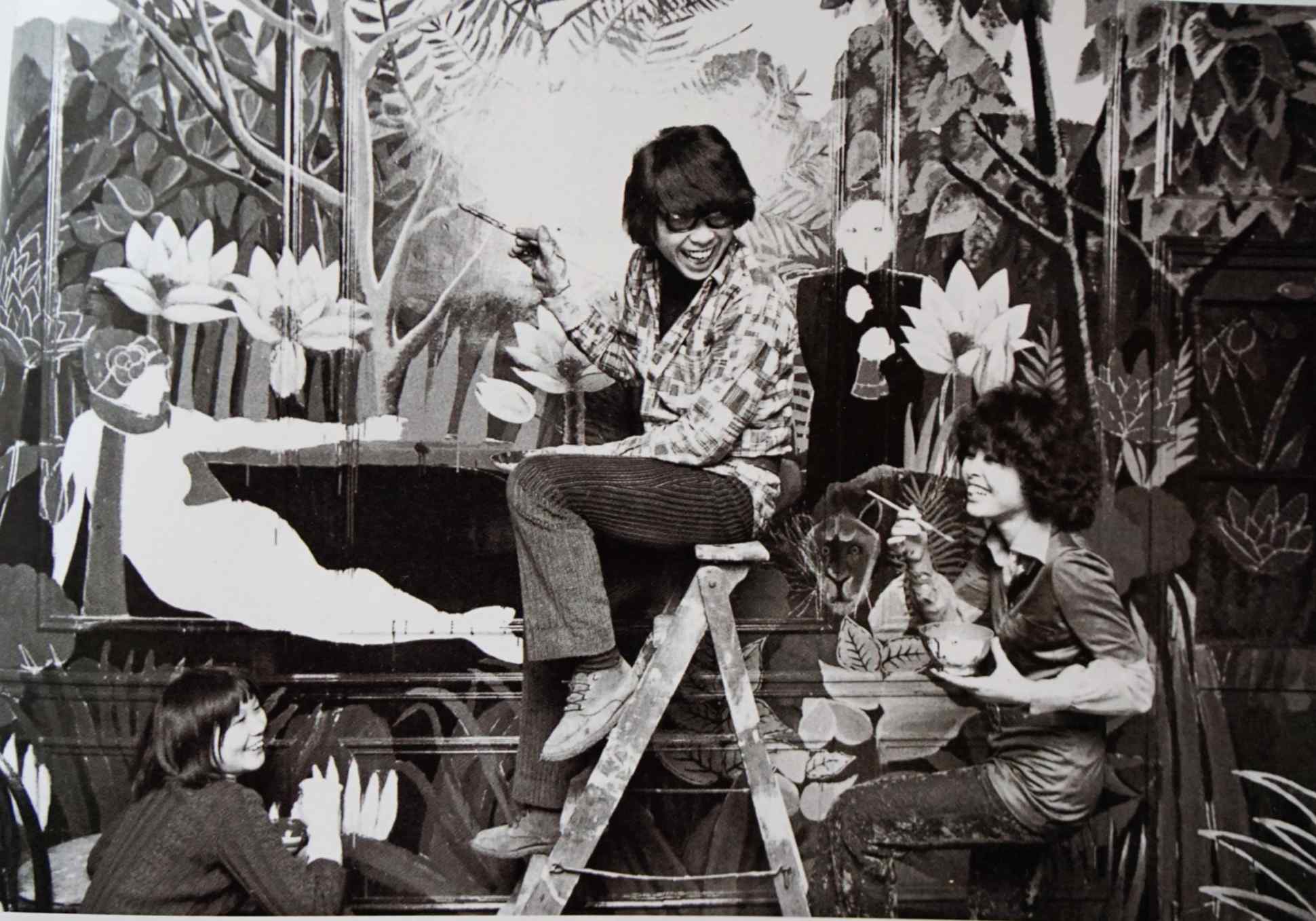 Me decorating my store
Kenzo Takada

Inspired by Henri Rousseau, I chose a fantastic jungle motif for my first boutique

White smoke hung in the air. Student protesters were clashing with armed police.

It was May 1968, and the wind of change was blowing fiercely through Paris.

The collision between the police and students seeking democratization developed into massive general strikes. Public transportation completely ground to a halt, gas stations were closed and long lines formed in the streets as people tried to hitchhike to work.

I rode my scooter to the student quarter on the left bank of the Seine to check out the scene of the "May Revolution." Riding on the back was Isao Kaneko, one of my classmates from the "Ninth Class of Flowers" at Bunka Fashion College. He had just arrived in Paris for a visit and was staying at my apartment.

"This is awful. The city is completely paralyzed. Nobody can even work."

"The police are coming. Watch out for students throwing rocks."

My salary was climbing and my lifestyle becoming ever more glamorous, but I wasn't satisfied at all

I'm the typical apolitical person, with little interest in political debates or ideologies. But even I could sense that the average citizen was angry and that ideas that had been taken for granted were breaking down.

It was the age of hippies and of protests against the Vietnam War. These social movements that had enveloped the world spilled over into the fashion industry, too, shifting its focus from haute couture for the rich to pret-a-porter for the masses.

This would have a decisive impact on my life as a designer, though I had no way of realizing at the time that it was destiny.

I was working as a designer at Relations Textiles, and before I knew it I was playing the role of guarantor for Japanese people coming to Paris. That's because the company, being short-staffed, had come to hire a number of highly talented women from Japan.

The greatest among these -- including Junko Shimada, Yumi Takagi, Mako Yamazaki and Atsuko Kondo -- were soon flourishing as designers, editors and pattern makers.

In Pairs, my salary was climbing and my lifestyle becoming ever more glamorous. But to be honest, I wasn't satisfied at all with my situation.

My rivals in Tokyo were going independent and opening their own boutiques. Junko Koshino opened Colette in 1966, and Mitsuhiro Matsuda opened Nicole in 1968, both in Aoyama.

They were wonderful boutiques, each brimming with its own unique perspective. I was full of envy and frustration. Kaneko, by the way, would later launch his Pink House in 1973. This is how the "Ninth Class of Flowers" had grown, its members competing among themselves.

"I have to hurry. I'm going to get left behind," I worried.

Our fates were forever linked. A short time later, my own opportunity arrived.

As 1969 drew to a close, I was walking through a flea market in Paris when a lady I recognized called out to me. "You're a fashion designer, right? What do you think about opening a boutique?"

She said there was an opening in the Galerie Vivienne, a gallery near the Louvre. It was a beautiful arcade with a glass ceiling and marble floor.

It sounded interesting, and I jumped at the opportunity.

The space was a bit small, but the rent was about the same as for my apartment. I would afford it somehow. I wasn't going to miss this chance. I would explain the situation to Relations Textiles later.

As soon as I accepted the woman's offer, I began making preparations. I got friends to help me, and I decorated the interior of the store myself. The theme was Henri Rousseau's "The Dream."

I was drawn to the fantastic world of the painting, which depicts a nude woman reclining in a jungle, along with a snake charmer and wild animals. My dreams took off all at once. I wasn't the least bit afraid of failing.