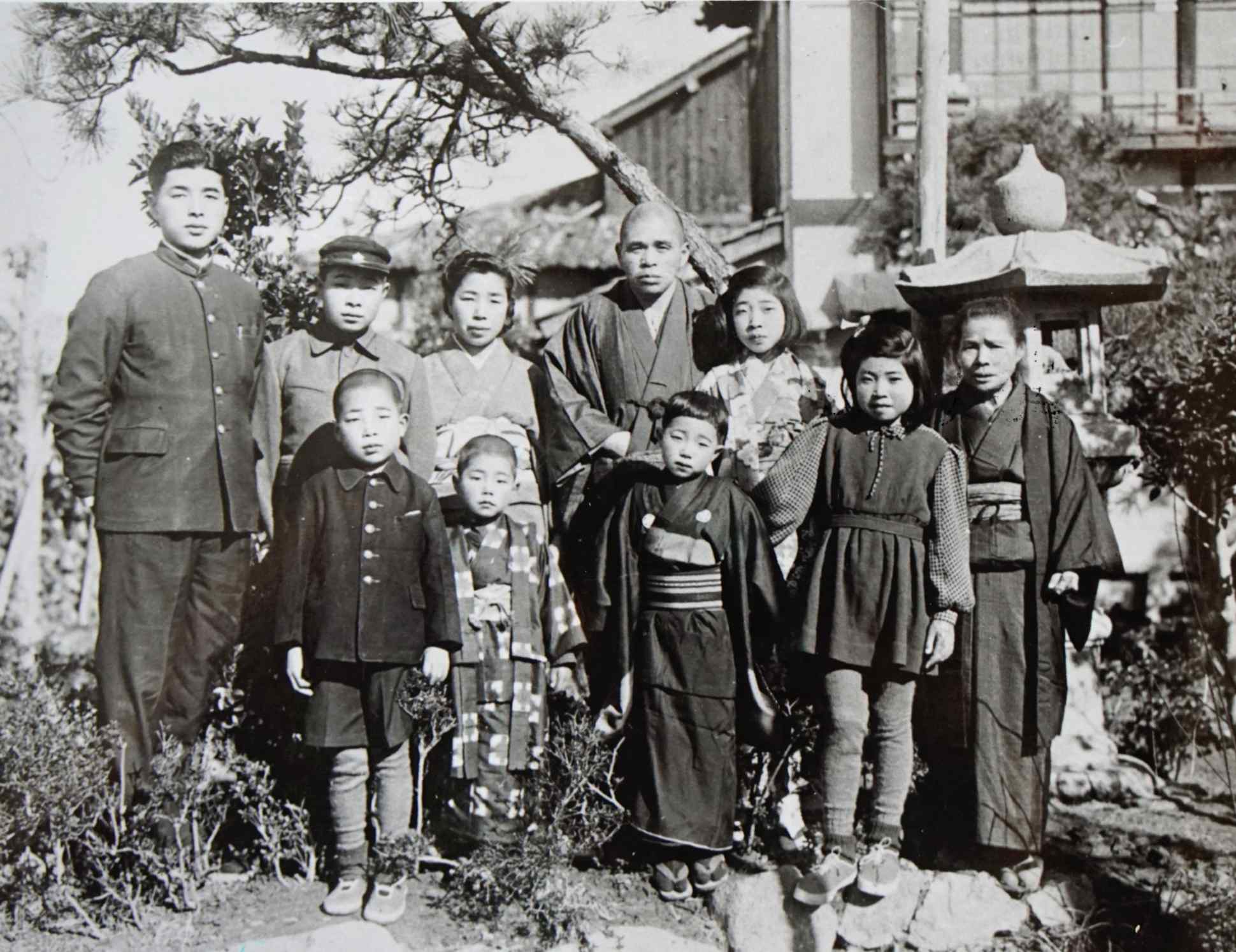 At our home in 1948. I am at the left end of the front row. My mother is in the back row, third from the left, with my father to the right of her.
Kenzo Takada

The air raid siren is ringing shrilly, and I am standing in the middle of the river, crying.

Himeji came under aerial attack twice in 1945, once on June 22 and again on July 3. The massive assaults by American B-29 bombers leveled war factories and homes, killing 514 and leaving more than 55,000 victims.

The city was left a burnt-out ruin.

Children can be surprisingly practical. Just like that, the brutes I had so hated days before became something I loved so much

The second attack came in the dead of night and continued for around two hours. Having been evacuated to my mother's home in Ichikawa, Hyogo Prefecture, my sisters and I sought refuge in a nearby tributary flowing into the Ichikawa River. It was then we realized that the sky to the south was glowing a bright red. That was the direction of Himeji, where our home was.

"Papa, Mama, brothers. Are you okay?" With a feeling akin to praying to God, I gazed beyond the mountain range.

Fortunately, our family who had remained at our home in Himeji were all safe. The city, however, had been burned to the ground in the relentless attack. Himeji Castle alone miraculously escaped damage. It gleamed splendidly, like a phoenix rising from the ashes.

Our family's establishment, the Naniwaro, was almost completely destroyed. All that remained was a white wall at one corner along the road. However, I breathed a sigh of relief when I saw the cheerful faces of my parents and brothers.

My family rented lodgings at the office of the Hiyoshi Shrine, one of the neighborhood structures that had survived the fire. At noon on Aug. 15, we gathered in the great hall, which had been turned into a meeting place, to listen to the Emperor's "Jewel Voice Broadcast," the imperial announcement of surrender, on a static-filled radio.

"The time has come when we must bear the unbearable, so as to pave the way for peace for all generations to come."

As a 6-year-old, I could not understand the meaning of those words. But the many adults who had gathered around sank down helplessly, some gazing up into the empty sky while others broke down and cried. This somber sight burned itself into my memory.

Rising from the ashes

Having accepted the terms of the Potsdam Declaration, Japan was occupied by Allied forces. I began attending Nozato Elementary School next to Himeji Castle. Japan as a whole must have been facing severe food shortages, but strangely, I have no recollection of being all that hungry.

One thing that left a strong impression on me was a small group of young American soldiers driving right up to our school in a Jeep. We had been taught that American soldiers were "red demons," but here they were handing out chocolate and gum, with friendly smiles on their faces.

My eyes grew wide seeing that new type of candy. Stuffing it into my cheeks then and there, it filled my mouth with a sweetness I had never before tasted.

These are the demons I was so afraid of? They're more like wonderful big brothers, I remember thinking.

Children can be surprisingly practical. Just like that, the brutes I had so hated just days before became something I loved so much.

Atop the ashes of war, black-market stalls began springing up. The Japanese people had set out on the long road to restoring the country.

The household belongings my father had buried in our backyard survived unscathed, and as the post-war chaos subsided, he re-opened the Naniwaro on the site where our home had stood in Umegae-cho. The number of employees increased quite a bit, and business prospered.

It was our tradition at the start of each year to put on kimonos emblazoned with the family crest and give New Year's greetings. From our veranda, my mother, sisters and I would watch people in the garden boisterously pounding rice into mochi cakes. Piping-hot ohagi -- mochi with sweet red bean paste -- is my favorite. Our family perhaps enjoyed a more comfortable life than most.

It was around this time that my aptitude for art gradually began to blossom.