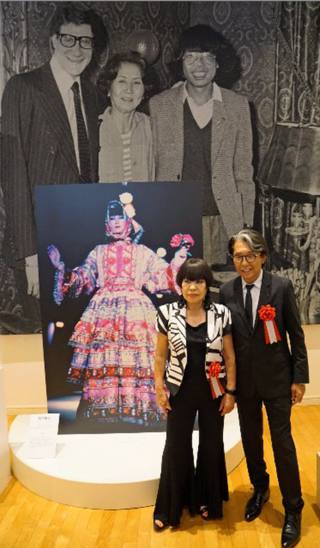 Me with Junko Koshino, left

Up until now, I have careened through life with no plan or design. That I have been able to do what I have is thanks to the good friends and work associates I have met.

In September 2015, I invited 500 people to a party to celebrate the 50th anniversary of my first trip to Paris. The venue was a restaurant in Bois de Boulogne. Lively Japanese drums and French cancan dancing made for a festive atmosphere.

Wearing a hakama, I made my appearance accompanied by two elephants. When I opened a round box in front of the cake, more than 300 butterflies fluttered off into the night sky. They had been raised from cocoons specifically for the event.

Karl Lagerfeld, who has been like an older brother to me, gave me with a white ceramic Chanel watch.

I don't care if people laugh at me for being childlike. I will boldly throw myself into a challenge with no fear of failure

In 1999, the same year I quit being a designer at Kenzo, Issey Miyake passed control of his own brand on to the next generation. Yves Saint Laurent, who died in 2008, had retired in 2002. All of us, without exception, had grown old.

But I continue to pursue my dreams.

I don't care if people laugh at me for being childlike. I will boldly throw myself into a challenge with no fear of failure. I will always have a mischievous heart, no matter what age I am. That adventurous spirit has been the driving force behind my life and my creations.

In September 2016, a ceremony was held to celebrate the 100th anniversary of the birth of Chie Koike, my beloved teacher at Bunka Fashion College. The event was held in Suzaka, Nagano Prefecture, her birthplace. That evening, I dined with Junko Koshino and Meiko Kitahara, classmates of mine in the Ninth Class of Flowers. For the first time in a long while, we enjoyed a long, leisurely conversation.

"Ken-chan, do you remember when you cut my underarm with scissors?" Junko asked.

It was back in our student days, when we were practicing a method of three-dimensional design called draping. I had draped fabric around Junko, and in the process of cutting it, the tip of the scissors nicked her near the armpit.

"I was surprised, because you didn't say anything."

The first I was aware of it, the cloth was stained red with blood, giving me quite a fright. Fortunately, it was nothing serious, but it was in a place where the slightest mistake could have caused a major injury.

Although I haven't been able to share all of them in this series, I have a mountain of exciting memories involving the Ninth Class of Flowers.

That summer, I received a letter from Francois Beaufume, my second co-manager with whom I split in anger. "Now that things have cooled down, do you understand how much I cherished you and the company?" he asked. I had sent him flowers when his wife died, and this letter was his response. I was delighted.

It had been 23 years since our falling out. We have both grown older. In our youthful enthusiasm, we clashed, but he was still a friend who helped create the golden age of Kenzo. "I'd love to meet and talk about the old times," his letter continued. Perhaps we'll try to get together next year. I have a feeling we will.

It was on Aug. 12, 1990, that death separated me from my life partner, Xavier. On every New Year's Eve since then, I have sat down to write my reflections on the year. I put down my thoughts in a leather notebook I bought with Xavier in Venice.

As 2016 drew to a close, I found myself relaxing on Phuket and wondering what I would write about that year. Illness, business, my memoirs ...

People around me have advised me to write a will, but I just can't bring myself to do it. That's because when I think about what comes after death, I feel like my dreams are disappearing.

I'd like to conclude this series by sharing a passage Xavier wrote just before his passing:

"Please love and get along with everyone.

You also have to forgive people."