I finally enrolled at Bunka Fashion College, but big challenges lay ahead 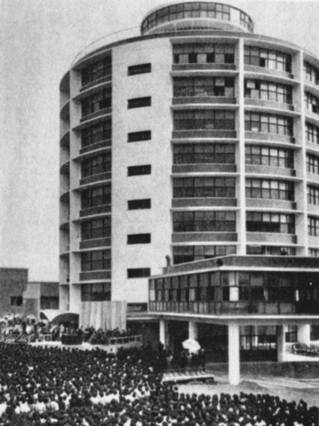 As soon as I moved to Tokyo, I headed toward the house of Junichi Nakahara, a popular artist for the girl's magazine "Himawari."

In the rain, I looked up his address in a phone book and made my way to a quiet residential neighborhood in Ekoda. I could hear strains of a piano flowing from the large, Western-style mansion.

So this is where those beautiful illustrations are born, I thought to myself.

Just thinking about that made my heart pound in excitement. Maybe if I pushed the doorbell, I could even meet Mr. Nakahara. But I didn't have enough courage, so I just stood and gazed quietly at his studio from the outside.

While living at the paint shop, I had begun studying drawing in earnest. In addition to receiving corrections to my illustrations by mail, I also attended designer Fusako Sumida's classes to study design and sketching.

"Takada-kun," she advised me. "If you seriously intend to make your way in the fashion industry, you had better go to a Western dressmaking school and study garment making properly."

Such schools had only just begun to open their doors to male students. In general, people were still cold to the idea of men learning to sew. Perhaps Sumida-sensei encouraged me because she could sense the industry's future.

Even so, I remained wracked with concern: Would male students really be able to find work?

There was nobody who had gone before me who could serve as my role model. It was as if I was groping my way through an uncharted jungle. I had no choice but to blaze my own path. As though trying to dispel my insecurities, I worked hard by day as a painter and focused on practicing design and other subjects at night.

In April of 1958, I enrolled in Bunka Fashion College. At first, I was surprised by the large number of women. In a class of 60 or so, there were barely more than 10 men. My year included Mitsuhiro Matsuda, who would later found Nicole Co., and Isao Kaneko, who went on to launch Pink House. We immediately became close friends.

Shortly before starting school, I ventured to ask my mother for an allowance. I didn't want to be a burden on her, but once classes began, I would have no time to work. It was an urgent problem, and I had no other way of avoiding it. Although money was tight, my mother agreed to send me 8,000 yen a month.

An ordeal awaited me at the school, however. I couldn't keep up with my classes at all. Many of the students were women who were good at home economics, or trainees from Western-style apparel shops, and they had already learned all of the basics, such as garment making and how to operate a sewing machine. Having only drawn pictures, I completely lacked such background knowledge.

Why did we have to sew together wedge-shaped darts? Why were saggy drapes necessary? I couldn't understand these things at all. I lagged behind in both garment making and using the sewing machine and couldn't catch up. I was a perfectly inept student.

The dark period stretched on.

My lodgings were a common room shared with four or five other male students, but our conversation and hobbies didn't mesh at all. Everyone but me indulged in mahjong every day. The sound of the playing tiles clattering noisily late into the night kept me from making any progress in my homework. My stress was building up. I wanted to move into a room of my own as soon as possible.

It was around that time that my father lost his long battle with diabetes. He was still young, being just 57. Returning hurriedly to Himeji after being informed that he was dying, I found my rail-thin father laying painfully on his futon.

"Ah, Kenzo," he asked with concern upon seeing my face. "Are you getting on okay? Will you be able to find a job?"

"I'm doing fine. Everything will probably work out okay," I said. To the end, however, I couldn't give him a response that would put his mind at ease.

As if following him in death, it was decided within just a few years that the Naniwaro -- the entertainment establishment my family had run -- would close for good.