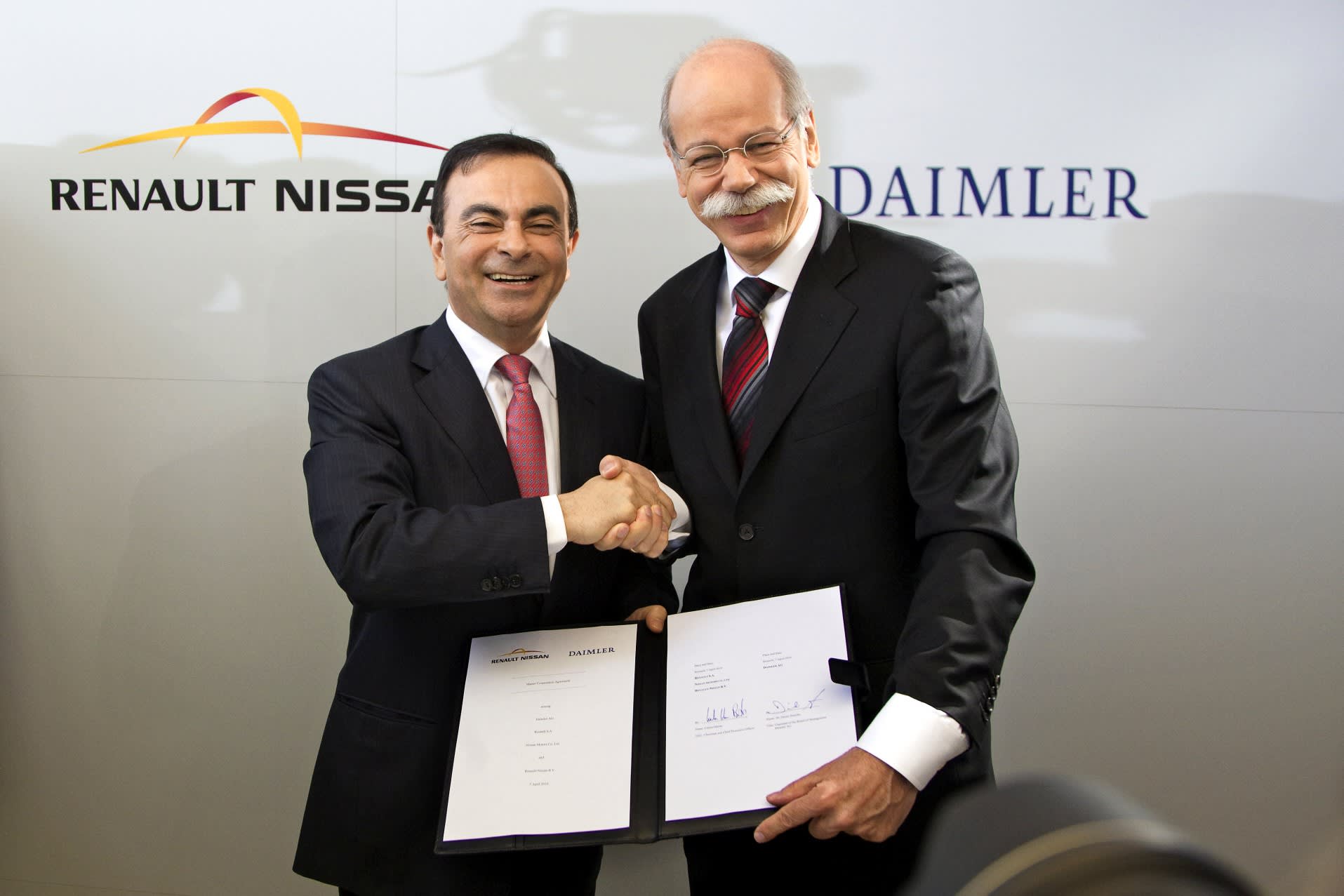 Ghosn discusses the 'strategic collaboration' and an unexpected legal challenge

Every year, a motor show alternates between Frankfurt and Paris. And every year, I host a press conference with Daimler Chairman Dieter Zetsche. There, we discuss our partnership on developing engines through the Nissan-Renault Alliance, while lounging in chairs. It is casual, and we invite the press. We have been doing this for the past few years, and I look forward to it every time.

Our partnership began in 2010 when Nissan Motor and Renault agreed on a business relationship with the German automaker, which included cross-shareholding. This partnership allowed our two companies to jointly develop chassis and engines for many of our respective vehicles, from luxury cars all the way down to compacts. We planned to exchange mutually beneficial information with each other in an open way. We began with three joint projects, but now that total has reached 13.

We call this relationship with Daimler a "strategic collaboration." It's different from the alliance between Nissan and Renault in that the latter is based on a high level of cooperation like that of a single corporation (although, as I have said many times, we are not). The bond between Daimler and the alliance, on the other hand, is more limited in scope. We thought it was still important to focus on the common goal of pursuing synergies wherever possible. Daimler, which went through an unsuccessful merger with Chrysler, shares our philosophy and it has worked well.

Nissan has always been an open-minded company, especially when it comes to partnerships. The automobile industry is entering an important phase where we all need to respond to new challenges, including taking responsibility to protect the environment and keeping up with new technology. It takes a great deal of time and expense to sustain stable growth while adapting to these new paradigm shifts. I believe that alliances and partnerships are the best way to meet these challenges and help us meet the demands of our era.

That said, unexpected things always have a way of coming up. Of all the events of the last few years, the one that sticks out in my mind is the series of negotiations we went through with the French government after the enactment of the Florange act in 2014. This new law awarded double voting rights to equity owners who had held shares for two or more years. I will spare you the details of the negotiating process, carried out with countless government officials, but it was a very big deal for us when we finally reached a settlement at the end of 2015.

The Florange act was enacted as a response to the closure of two ArcelorMittal blast furnaces. The Florange act meant that the government had gained double voting rights, and thus a stronger voice, in businesses in which it held equity. And because the French government owned about a 15% share in Renault, it would have gained a more powerful voice in the company. We were also concerned about the implications this law would have for Nissan, in which Renault owned a 43.4% share.

At the shareholders meeting in April 2015, we offered a proposal to maintain the existing structure. The French government sought to buy additional Renault shares on a temporary basis, and our proposal was rejected by vote. Naturally, tensions between us and the government were heightened.

Because I am the president of both Renault and Nissan, the situation was especially complicated. To prevent conflicts of interest, I temporarily resigned as chairman while the topic of voting rights was discussed at the Renault board. Nissan's position was presented by Hiroto Saikawa, now co-CEO, who also served as a Renault director. We took a firm stance that "the developments in France should have no impact on Nissan, which is an independent Japanese company." Otherwise, the alliance of Nissan and Renault that we'd painstakingly built over the course of 17 years would suffer.

Ultimately, we were able to reach an agreement that restricted the involvement of the French government. Its voting rights at Renault were limited to certain subjects, and we agreed on a deal that would offer it no voting rights pertaining to Nissan-related subjects. In terms of long-term security, Nissan was in the clear. In fact, this was a highly important development that strengthened the trust with Renault.