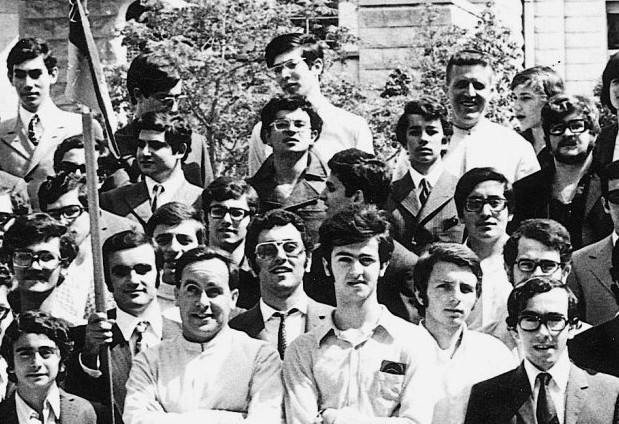 Carlos Ghosn, center, second from back, at his high school graduation ceremony at College Notre Dame in Lebanon
My Personal History Carlos Ghosn

Following the doctor's recommendation, we moved to Rio de Janeiro, but my condition didn't improve much. Concerned about my slow recovery, my mother convinced my father that I should continue treatment in a nicer environment with fresher air.

My father agreed. After a long discussion, my mother, older sister and I moved to Lebanon, while my father remained in Brazil. Despite the move, my bond with Brazil was not broken. We returned to Rio to see my father often.

The Lebanon where I spent my childhood was much different from the Lebanon my grandfather had left a half-century before. It possessed a spirit of gender and cultural equality. People from various religions lived together harmoniously, and it was often called the "Switzerland of the Middle East," until civil war erupted in 1975.

Although Lebanon had won its independence from France in 1943, it continued to belong to the French cultural sphere. The Lebanese people considered the plurality of cultures to be a positive attribute. Indeed, I grew up in a multicultural environment. The school I attended -- the College Notre Dame, a Jesuit school providing continuous education through high school -- had a French principal and Lebanese, Syrian and Egyptian teachers. In many ways, the Jesuits' organization could be considered the world's first "multinational corporation."

I was a good student, but I was rebellious. Much to my mother's disappointment, I had a reputation as a "problem child" at school. I liked history, geography and languages, and I would study diligently at home. But at school I would hang out with friends, goof around and cause harmless trouble.

I had so much energy inside of me that I was always looking for ways to disperse it all. Looking back now, I know I did some unwise things, but I don't necessarily regret them. After all, isn't that what youth is for?

I was not without positive role models. The person who had the strongest influence on me during this period was a French teacher named Father Lagrovole. He was in charge of French literature. He was stout and hunched over with poor posture, but he performed the most magnificent poetry readings.

My favorite was a reading of the fables of Jean de La Fontaine, often called the Aesop's Fables of France. "One day, the weasel's wife seized the palace of the young rabbit," Father Lagrovole read aloud. He then asked me, "What kind of instrument do you associate with this poetry?"

Before I could answer, he said, "I thought of the trumpet when I heard s'empara," explaining that the sound of the word for "seize" resembled the sound of that instrument. He warmed to the idea, and sang out brightly: "S'empara, s'empara!" Despite how strict he was with his students, his classes were, without comparison, the most enjoyable. His advanced age meant we looked up to him as a wise figure and a person of truth.

One thing I learned from him was the importance of expressing my ideas concisely. Father Lagrovole often said, "When you make everything complicated, it means that you don't understand anything." He was also an example of someone of great virtue, one among the many monastics of the times who left their families to teach subjects like French and literature to the world. Even during my rebellious phase, many of his lessons stayed close to my heart.

My mother remained a powerful influence on my life as well. When I turned 17, I faced an important decision: where to go to further my education. It was perfectly acceptable to get a basic education in Lebanon, but my mother urged me to consider attending a university in France to ensure better personal development. She made a strong case, and so I took and passed the baccalaureat, France's university entrance qualification test. I had been blessed with many close friends during my 11 years of school life in Lebanon, and those friendships continue to this day. But I felt my destiny was in France. Again, I would leave another home for a new horizon.