My early years in a turbulent China: Mochtar Riady's story (2)

Born in Dutch-controlled Java, I soon moved to my father's home village in Fujian

I was born in May 1929 on the island of Java, which was then part of the Dutch East Indies. At the time, there was no country called Indonesia.

I hail from Malang, a highland region in eastern Java. My father, Li Yamei, migrated from China's Fujian Province to a resort town in Malang called Batu (which today is separate from Malang regency). There he earned a living by selling traditional Javanese textiles known as batik.

When I was 5 months old, my father took me and my mother to his home in Fujian Province to be with my ailing grandfather. My father was the eldest son and was worried about the family he had left behind. I had four elder sisters, all of whom were born in China and lived in the family home.

Xindian, my father's ancestral village, was located in the town of Jiangkou, in what was then Putian County (now Putian city). The area is halfway between Fuzhou, in the north of Fujian Province, and Xiamen, in its south. 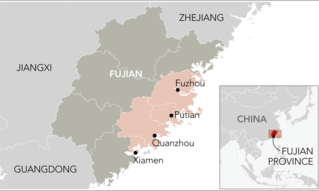 Lying between mountains and the sea, Putian -- or Xinghua, as it was once called -- had very little land for farming. Many people hoping to start a new life emigrated to what is now Indonesia or Singapore. In those days it was easy to enter and leave the country, and people traveled frequently between China and Southeast Asia.

In 1918, when he was about 19, my father left his village for Indonesia. He was already married and had a child by then.

Initially my father would travel back and forth between China and Indonesia, but he eventually brought my mother to Malang, where I was born.

My ailing grandfather died soon after we arrived in Xindian. My father then returned to Malang on his own, leaving my mother behind to take care of my grandmother. I stayed with her.

Some 1,000 people from about 200 households lived in Xindian at the time. All but one family in the village had the surname of Li, the lone exception being a family called Chen. 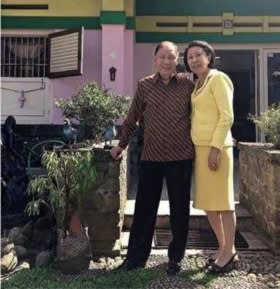 Mochtar Riady, left, and his wife (Photo provided by company)

In the old days, Chinese villages were basically communities of families from the same clan living together. My father came from a family of woodworkers and was part of the fifth generation born in the village.

During my grandfather's time, the family had 2 hectares of farmland and was the second-richest household in the village. The family even lent money to other villagers as a side business.

Those were turbulent times in China. Though the Kuomintang held power in Nanjing, in reality warlords controlled much of the country.

Even in Fujian Province, armed groups were rampant, with rival factions in the north and south locked in a fierce back-and-forth battle for dominance.

Because Xindian was close to a road running between Fuzhou and Xiamen, the village was exposed to constant danger.

When a battle began, groups of armed fighters would pass near the village, causing terrified villagers to flee to the mountains, where they hid in tombs until the danger had passed. Battles broke out every month or two, and each time the villagers were forced to take refuge in the mountains.

Villagers also feared the gangs of tu fei, or bandits, who usually struck at night. To protect against invasions, houses were built along a narrow road with forts at either end.

Every night, villagers took turns standing guard against the bandits. These gangs also fought each other, sometimes with guns. I remember villagers, too, owned guns, to protect themselves.

As the fighting continued and public order broke down almost completely, my grandmother began to worry about my future. She urged my father to come and take me back to Malang as soon as possible.