My grandfather was an inventor, but he wanted my father to become a business manager.

Kiichiro Toyoda, the eldest son of automatic power loom pioneer Sakichi Toyoda, was born in 1894 in what is now the city of Kosai in Shizuoka Prefecture. He graduated from Tokyo Imperial University in 1920 with a degree in mechanical engineering. Then, at Sakichi's urging, he studied at the university's law department for four months. 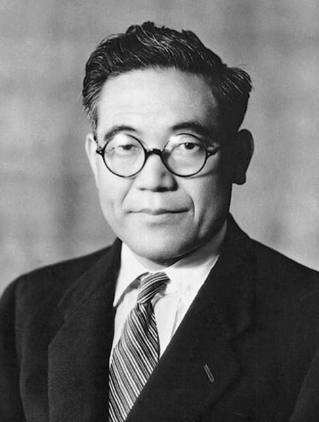 "It is not easy to invent something new," Sakichi told my father. "You should devote yourself to running the business instead."

Yet Kiichiro could not abandon his passion for mechanical engineering. When left to his own devices, he would spend hours attempting to design a new type of power loom.

One day, when Sakichi was supposed to be in Shanghai, he caught my father hunched over the drawing board. "You also like this kind of work, don't you?" Sakichi said, taking him by surprise.

That's how Sakichi eventually gave Kiichiro his blessing to become an engineer.

After graduating from university, Kiichiro joined Toyoda Boshoku. He was put in charge of the construction of a pilot textile factory equipped with Type G power looms -- Sakichi's invention -- in what is now the city of Kariya in Aichi Prefecture. He ran the plant on a trial basis, aiming to make it commercially viable. This project led to the establishment in 1926 of Toyoda Automatic Loom Works. Kiichiro was appointed managing director of the new company.

Meanwhile, Kiichiro developed a passion for automobiles and an ambition to build a domestic model. American cars, including Fords, dominated the Japanese market at the time. Many people scoffed at Kiichiro's plan, noting that even big conglomerates such as Mitsui and Mitsubishi had given up on entering the auto business. He was undeterred.

Lesson at the lake

It was around this time that I began to really notice my father. He was so busy that he was hardly ever home; even on his rare days off, I often saw him with a pencil and paper in hand, jotting down ideas and drawing blueprints. He was the kind of person who thought about his work every waking hour.

That does not mean he neglected his family. During my summer breaks from school, he took us on numerous family trips. On one vacation at Lake Kawaguchi in Yamanashi Prefecture, I missed a bus. My father, normally a good-natured man, got quite angry with me. "You shouldn't act like that," he said. "Opportunities wait for no one. If you miss the chances that come your way, you'll lose out."

Perhaps my father's mood that day was affected by the excitement surrounding his business. The automotive manufacturing industries law, which encouraged the domestic development and production of cars, was enacted in Japan in 1936. Under the law, both Toyoda Automatic Loom Works and Nissan Motor were designated for special government assistance. This was one of the reasons why Toyota grew so rapidly in the subsequent years.

I learned a lot about business from my father over the years, but I think that conversation at Lake Kawaguchi was the first lesson.

"Wash your hands three times a day" was another lesson; in fact, it was one of my father's mantras. What he actually meant was that the only way for us to succeed as engineers was to get our hands dirty. To this day, we insist that all managers at Toyota inspect factories themselves before making business decisions. This philosophy is derived from Kiichiro's teaching.

Another way my father imparted his wisdom was by insisting I help him with gardening. Whenever we moved to a new house, he would build a pond in the garden. As a boy, other pastimes beckoned, and I was not enthusiastic about this chore. But I learned about mixing cement and using molds. Years later, when I launched a residential home business, my father's teachings came in handy.