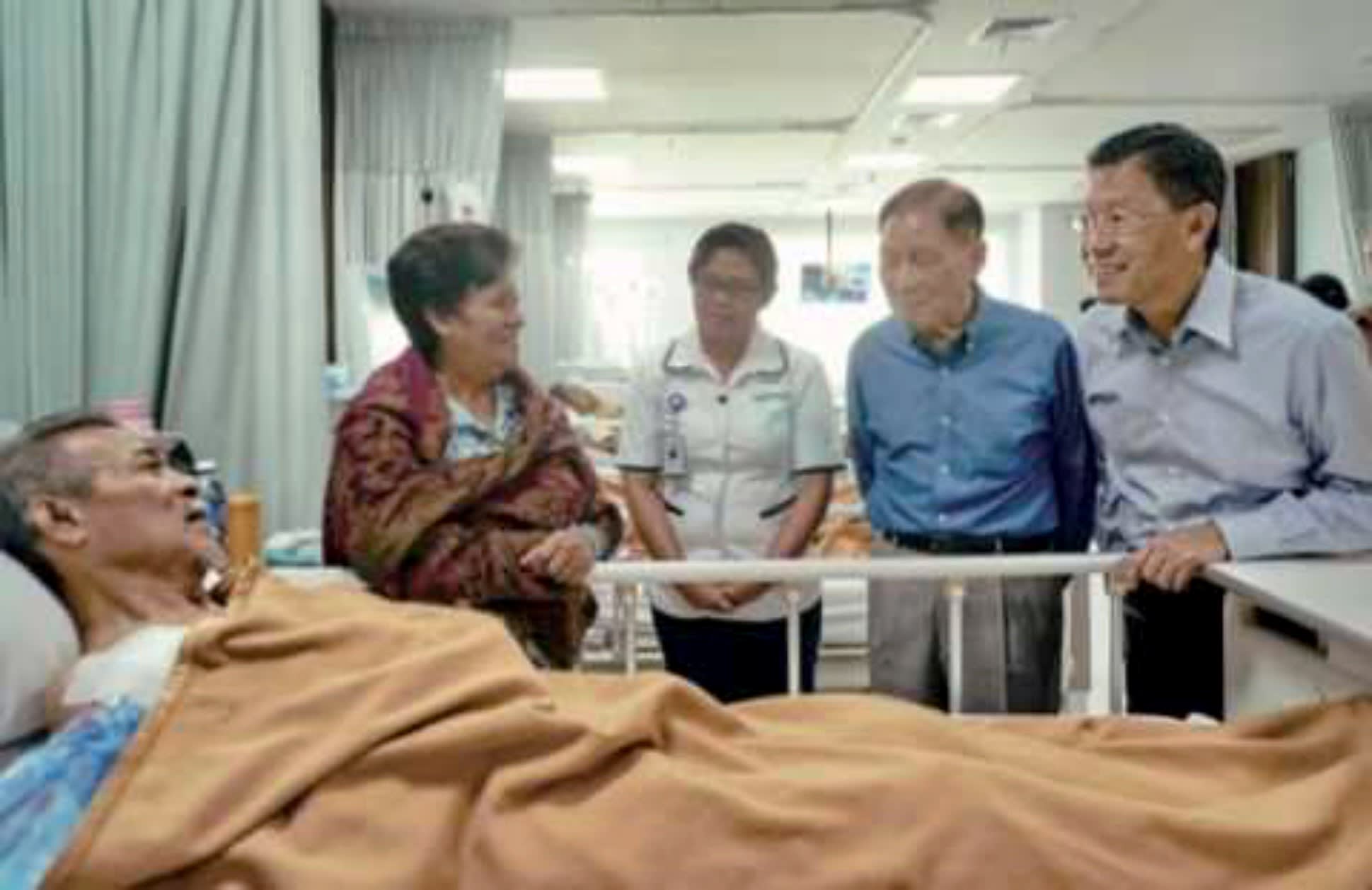 Here I am visiting a patient at Siloam Hospital, which is operated by Lippo Group. (Photo provided by company)
My Personal History

Lippo Group pulled out of banking and made land development its core business.

In the 1990s, Lippo developed a new town on a tract of wasteland in Karawaci, located to the west of Jakarta. In planning the project, we placed a high priority on ensuring that the town would be able to provide residents with all of the services that are essential for daily life. A residential area must have the facilities to meet these needs.

This meant that Lippo had to expand its operations into these eight areas. I decided to operate these businesses as independent companies and grow them into nationwide chains.

We could enter many of these business areas, including retail, through acquisitions or partnerships. But this approach could not easily be applied to schools and hospitals because operating these facilities was not yet a viable industry in Indonesia.

In 1993, we opened an elementary and middle school with classes taught in English in Karawaci. The school was named Sekolah Pelita Harapan (ray of hope). We recruited qualified teachers from the U.S. for the new school, and limited the number of students in each class to around 10 as part of our small-class policy. We also opened a school where classes were taught in Indonesian.

In the ensuing years, Lippo opened many such schools in the residential communities it developed and in doing so established school operation as a new industry. Later, we also set up a university called Universitas Pelita Harapan in Karawaci. It now has a range of faculties, including law and medicine.

For our medical business, we persuaded the operator of Singapore's reputed Gleneagles Hospital to open a hospital in Karawaci in 1996. Unfortunately, however, the hospital kept losing money and Gleneagles eventually withdrew from the business.

Lippo took over the money-losing hospital and operated it under the new name of Siloam Hospital.

An unprofitable business cannot be sustained for long, no matter how lofty its purpose. I set out to reform the management of the hospital.

As I had once done when managing banks, I drew up a chart showing operational workflows so that we could identify the factors behind the hospital's continued losses. It took a year and a half to complete this chart, but it helped us pinpoint wasteful practices and overlapping operations.

To cut costs, we replaced X-ray film with digital data and introduced stricter rules for purchasing and managing inventories of medical supplies. We even went so far as to reduce the number of items on the hospital cafeteria menu.

These efforts paid off, and the hospital started eking out a small profit. Lippo's hospital business has since grown into a national network of 32 medical institutions.

I also radically restructured Lippo's overseas operations, which were headquartered in Hong Kong. As the group changed its core business from financial services to land development, we moved its headquarters to Singapore in 2000. Hong Kong's real estate market was dominated by a small number of Chinese conglomerates, leaving little room for growth for newcomers.

In 2006, Lippo acquired Overseas Union Enterprise, a Singapore-based real estate developer that operated Mandarin Hotel on Orchard Road, Singapore's main shopping street. With its first floor being used as a large, old-fashioned hall, however, the hotel was failing to take full advantage of its prime location.

We remodeled the hotel's first through fourth floors into a shopping mall featuring brand-name shops and restaurants. This was opened up to hotel guests and local residents alike, so that anyone could enjoy shopping and dining out.

OUE bought the former head office of Singapore's DBS Bank and renovated the first four floors of the building to include commercial facilities such as gyms, clinics and shared kitchens. The property was reborn as a combined office and apartment complex serving both business and residential needs, sharply increasing the value of the old building.

Lippo had survived the Asian financial crisis of 1997~1998 and transformed itself into a new, real estate-focused group.