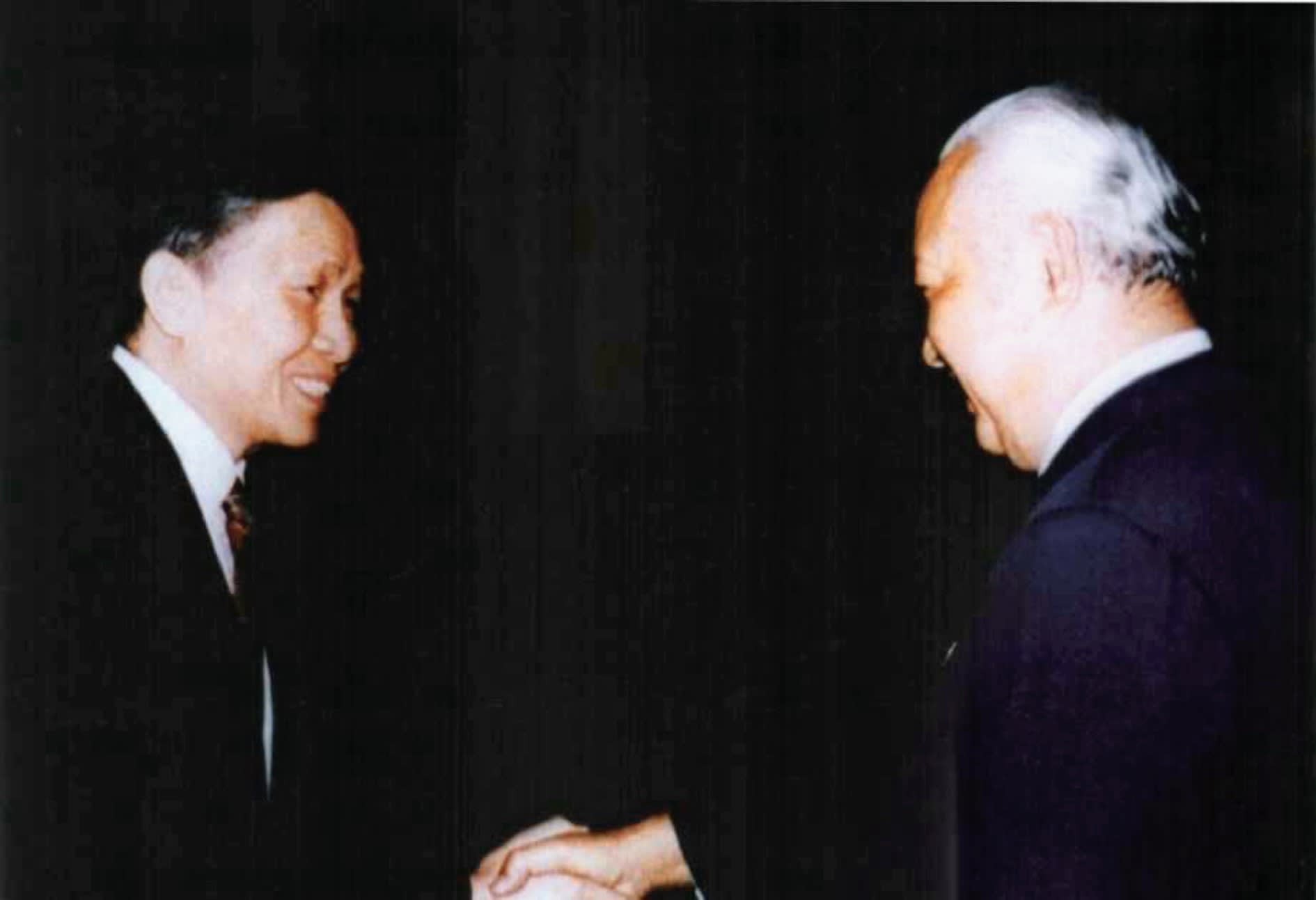 I developed a close personal relationship with President Suharto, right, through Sudono Salim. (Photo provided by company)
My Personal History

A new era arrived for Indonesia's commercial banks in 1988, bringing with it unprecedented opportunities for growth.

In that year, the Indonesian government finally lifted the ban on joint banking ventures between domestic and foreign banks and eased the restrictions on the opening of branches by Indonesian banks.

I immediately started expanding the operations of the banks I managed, ordering them to open new branches around the country. My target was to open 150 Bank Central Asia branches and 100 Lippo Bank branches within a year.

Opening new branches wasn't hard as long as we could find places to set them up, but training enough employees to operate them was a big challenge.

I had long been enamored of the thoughts and theories of Frederick W. Taylor, an American inventor and engineer who was known as the father of scientific management.

Taylor preached the need to standardize working processes at factories. I applied his ideas to banking operations.

I standardized the tasks at bank branches as much as possible and codified them in manuals so that even new recruits could learn to perform them quickly.

I read books by such American thinkers as Alvin Toffler, John Naisbitt and Peter Drucker. They all predicted the advent of an "information society." Computers would play vital roles in this future, they said.

From early on, I became interested in information processing and network building. With the help of Jackson Stephens, an American investment banker and one of my business partners, I invested heavily in computer systems for my banks.

I became the first banker to introduce ATMs to Indonesia.

Standardizing and computerizing operations helped us achieve our branch-opening targets for both BCA and Lippo Bank. When I took over management of BCA in 1975, it had only one office. Now, it had more than 300 branches. Its asset value surged from $1 million to $3 billion in 1990, making BCA the largest commercial bank in Indonesia.

I considered taking BCA and Lippo Bank public as a step toward transforming them from owner-managed businesses to banks with modern corporate management systems.

But my main business partner, Sudono Salim, opposed the idea of listing BCA because he was concerned that its major shareholders would not be able to keep the bank under their control. Due to Sudono's objection, BCA's initial public offering was postponed. But Lippo Bank made its stock market debut in Jakarta in 1989.

Despite our disagreement over the IPO issue, my relationship with Sudono remained close and friendly.

Sudono never blamed others for losses in business. His broad-mindedness was one of the factors that helped make Salim Group the largest conglomerate in Indonesia.

Sudono also showed concern about my health and arranged for me to receive a medical checkup at a U.S. hospital. The examination found that some of the arteries in my heart were blocked.

In 1989, after a thorough examination, I was told that my life could be at risk if the problem was left untreated. I was advised to have bypass surgery and underwent an operation in Australia.

Before the operation, I sorted out my assets. Sudono and I had become co-owners of many financial institutions through mergers and acquisitions. We reconfirmed our respective rights concerning these institutions.

Fortunately, the operation went well and I returned to the banking business. This experience, however, led me to start thinking about becoming independent from Salim Group.

Salim Group grew by capitalizing on its close ties with President Suharto, but I felt that Sudono and Suharto were too friendly with each other. Their personal relationship made me uneasy. Suharto had ruled the nation for a quarter century and was now 70 years old. It was impossible to rule out the possibility of a regime change.