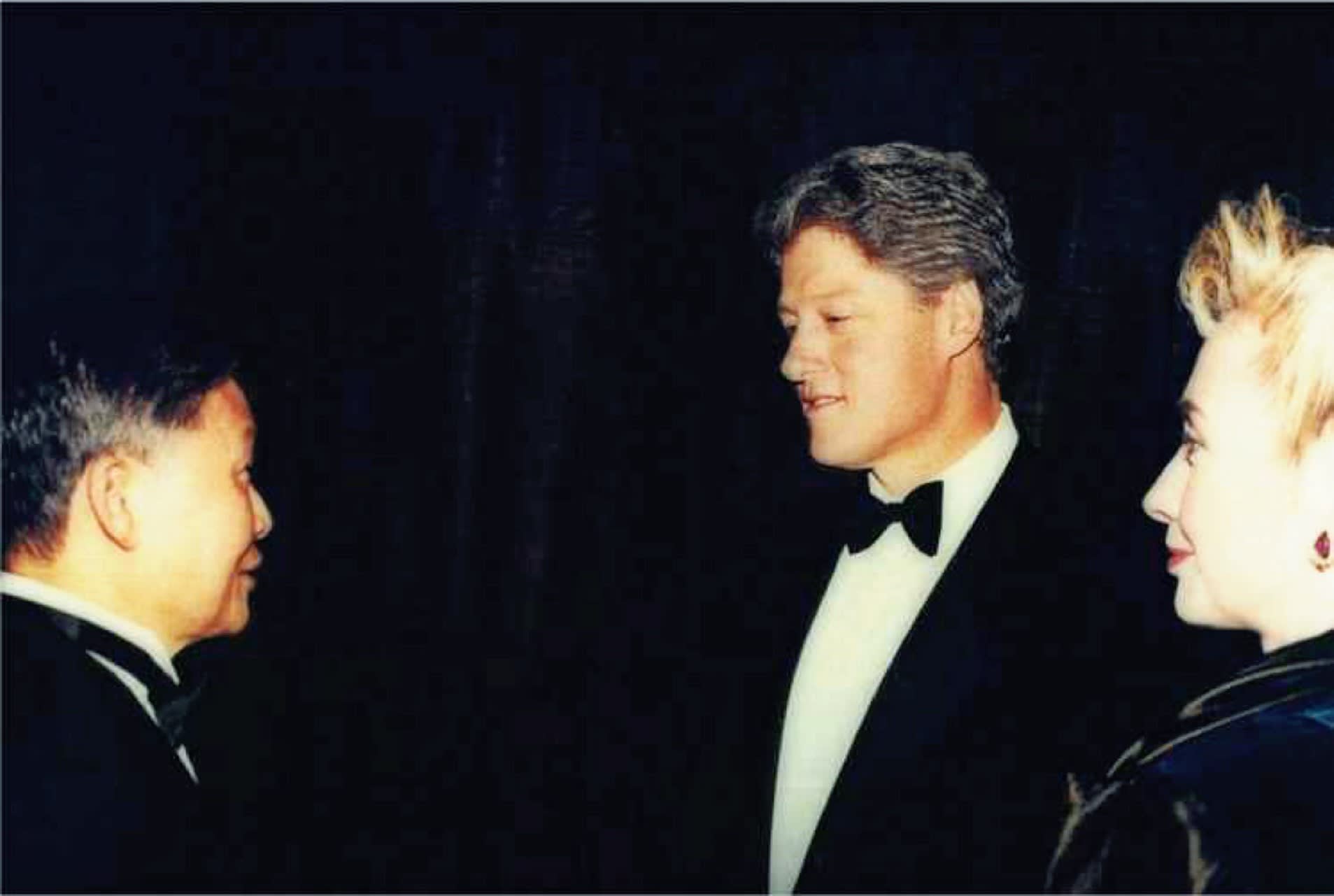 I attended a ball to celebrate Bill Clinton's inauguration as president on Jan. 20, 1993. (Photo provided by company)
My Personal History

In the 19th century, during the latter Qing dynasty, there was a reputed business tycoon in China named Hu Xueyan.

Hu started out as an apprentice to a financier in Hangzhou, Zhejiang Province, and went on to amass a vast fortune through finance and trade. He used his financial muscle to control politicians and wield great power.

But Hu met with a miserable end. He became embroiled in a power struggle, his business floundered, and he died a disappointed man.

After reading a novel about his life, I became determined to keep a respectful distance from politicians.

Sudono Salim, the leader of Salim Group and at one time my main business partner, had close personal ties with Indonesian President Suharto, which helped him win various business permits and licenses from the government.

I could have easily started government-related businesses if I had sought Sudono's good offices. But I did not do so.

The last 10 years of the Suharto government were marked by rampant corruption, and I feared I would be forced to accept unreasonable demands if I became involved in businesses linked to politicians.

When Suharto resigned from power in 1998, Salim Group faced growing criticism about its cozy ties with the strongman and Sudono was forced to take refuge in Singapore for his own safety.

Among foreign political leaders, I developed close personal ties with former U.S. President Bill Clinton, whom I first met around 1984.

Before a party to celebrate the acquisition, Stephens asked me if I wanted to meet the governor of the state. He called then-Gov. Clinton, who was in his 30s, on the phone, and 15 minutes later he came to see me.

I appointed my second son, James, as chief executive of Worthen Bank. Since the bank acted as an underwriter for bonds issued by the state government, James became Clinton's friend and jogging partner.

When Clinton ran for president, James, as one of his close friends, helped him collect political donations. James played the same role during Clinton's re-election bid.

But James became embroiled in a political spat, and his donations to the Clinton campaign were judged to be illegal. This incident taught him some important lessons.

I had repeatedly advised James to keep a certain distance from politicians. The trouble he experienced over his donations must have brought home to him the meaning of my advice.

I cannot forget my relations with Chinese President Xi Jinping, either. I frequently visited Fujian Province from the late 1980s through the 1990s, and I first became acquainted with Xi during this period. He was in his 30s at the time and serving as secretary of the Communist Party's Fuzhou Municipal Committee in the province.

Xi held various party posts in Fujian Province from 1985 until 2002, when he transferred to Zhejiang Province.

I was attempting to build a power plant in Meizhou Bay in Fujian Province, and I met with Xi many times in connection with the project.

During his stint in Fujian, Xi visited Indonesia three times. On one of these occasions, I welcomed him at my Lippo office in Karawaci. At that time, Lippo was developing a residential area in Karawaci, and I arranged for Xi to inspect the private-sector urban development project.

During his third visit to Indonesia during that period, I invited him to my home and served him local dishes from my father's hometown of Putian, in Fujian Province.

When you run a business you inevitably become acquainted with politicians. But I have adhered to the principle of maintaining a certain distance, even from those who have become my close personal friends.