China treads lightly on Myanmar coup with billions at stake 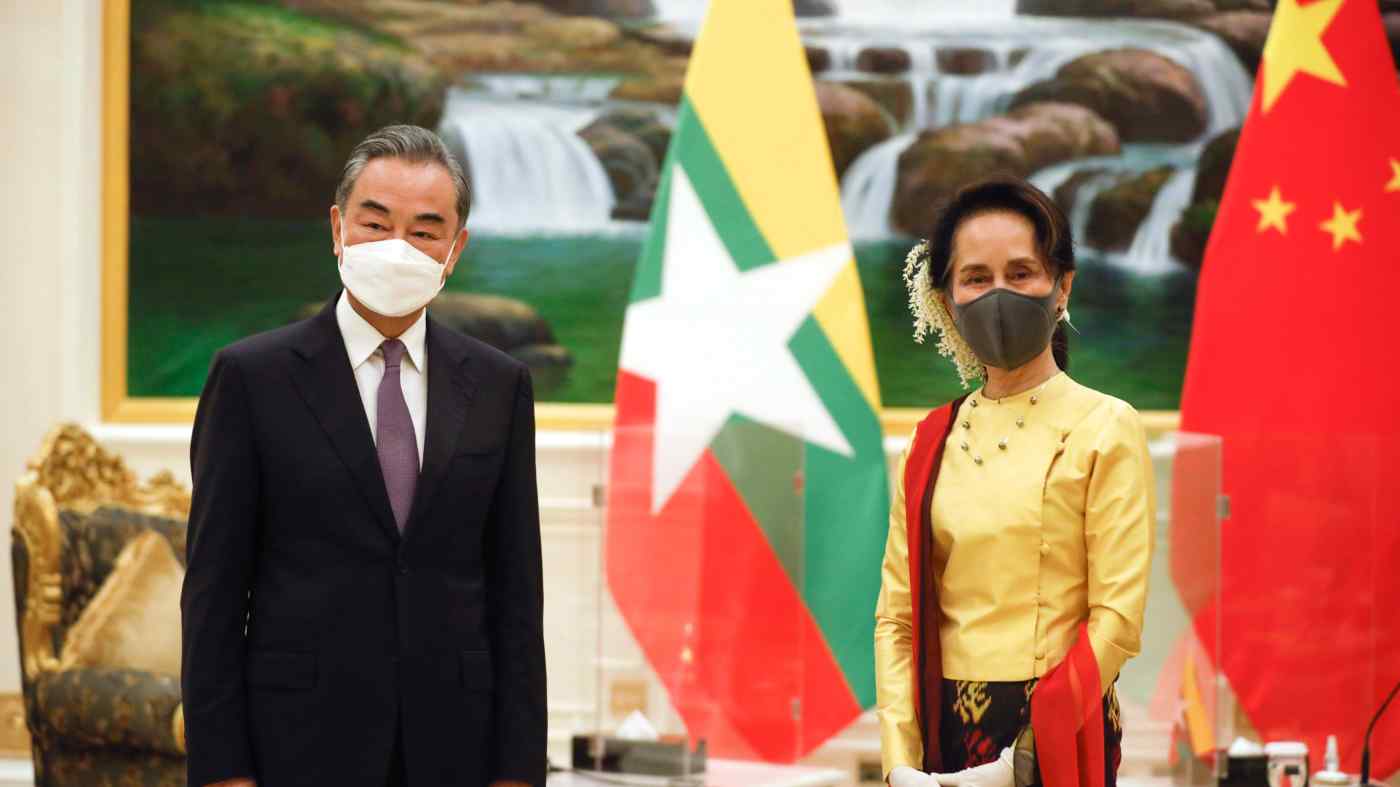 BANGKOK -- China has maintained a guarded approach in its response to last month's coup in Myanmar, with many in Southeast Asian diplomatic circles saying Beijing sees the unrest as a threat to the massive investment it poured into the country over the decadelong transition to democracy.

Such cautious diplomatic steps arise from China "not being happy with the coup," a Southeast Asian diplomatic source told Nikkei Asia. "The signs emerged after the military took over, because it has high economic stakes in Myanmar and so much to lose."

China analysts based in Hong Kong agreed that Beijing was likely not pleased with the turmoil spreading across the country after the Feb. 1 coup. China has multibillion-dollar economic and strategic investments in the pipeline that were blessed by the leaders of Aung San Suu Kyi's National League for Democracy, which controlled the civilian-led government that the military overthrew.

The last thing China wants to see "is dramatic regime change in Myanmar that will bring instability to its southern neighbor," said Enze Han, a political scientist at the University of Hong Kong.

He said the Chinese government and Chinese companies will "lie low" and pursue a wait-and-see approach with the unrest in Myanmar, where the United Nations estimates that over 50 people have been killed by security forces as the junta cracks down against massive, anti-coup civil disobedience campaigns.

There is a "tremendous amount of anxiety in Beijing about the huge stakes the country is facing in Myanmar," added Han, who is the author of "Asymmetrical Neighbors: Borderland State-building between China and Southeast Asia." China's relations with "the NLD government [were] very good."

China's strong relationship with the NLD, led by Myanmar's de facto leader Suu Kyi, since 2016, was affirmed two weeks before the coup. Analysts in Yangon, Myanmar's largest city, saw Chinese Foreign Minister Wang Yi's high-profile visit to the country in mid-January as a sign of Beijing's deepening ties with the civilian center of power. It was China's nod that it wanted stability and continuity, said one analyst.

Wang met Suu Kyi to sign bilateral agreements for a flagship project -- the China-Myanmar Economic Corridor -- rather than wait for the NLD government to begin its second term on Feb. 1 following its landslide general election victory in November. The economic corridor, which stretches from China's Yunnan Province to Myanmar's coast on the Bay of Bengal, is part of Beijing's Belt and Road Initiative and will provide it with access to the Indian Ocean oil trade. The venture is valued at $100 billion and includes 38 planned large infrastructure projects.

China's diplomatic dilemma was brought to relief during two pivotal moments since the coup: the drafting of a U.N. Security Council statement on the crisis and a resolution tabled at the U.N. Human Rights Council. In both, China watchers say that Beijing sought language to strike a balance between the two main political camps now at odds in Myanmar -- the military and the pro-democracy movement -- with which it has cultivated strong ties.

According to a veteran Southeast Asian foreign ministry official, China used the Security Council discussions in New York to settle for language that "was unusual" because it upheld democracy, human rights and the rule of law. Such a change in tack was seen as Beijing's effort to "put some distance between itself and the military's coup," the official said of the behind-the-scenes discussions at the U.N. "China often opposes country-specific resolutions critical of its allies at the Security Council."

Western governments, by contrast, had drafted an initial statement that was stronger in tone, criticizing the Myanmar military and condemning the coup. Western powers had done likewise in a subsequent resolution that was tabled at the U.N. Human Rights Council last month. The latter denounced the coup and demanded the military release all prisoners.

Seasoned U.N. watchers took note of China's response to the vote on the resolution at the human rights council. Rather than openly oppose it -- which Beijing had done with resolutions on Myanmar in recent years -- China opted to abstain, enabling the document to be approved by consensus.

"China was conveying a message to the junta through this diplomatic approach," said a European observer of the Human Rights Council sessions. "Beijing doesn't have to vote against the resolution to say it is not happy with the coup."

China's quandary is rooted in its economic expansion in Myanmar since 2011, when the country began its experiment with democracy after nearly 50 years of military rule. During these 10 years, China emerged as the largest trading partner, largest lender and among the top three sources of foreign direct investment for the $71 billion frontier economy.

China's economic foray in Myanmar during the decade of political transition, first with a pro-military government and then with the NLD-led civilian administration, showed a strategy of cultivating allies from across the country's political spectrum.

China "developed outreach and influence with all key actors in the country, including the armed forces, the National League for Democracy, ethnic nationality organizations and business groups," said a senior analyst at a Yangon-based think tank. "Having learned from the two turbulent decades when it provided support to the Communist Party of Burma, the Chinese government knows that it is not a successful strategy to provide backing to simply one group or another in the country's complex politics."

China's infrastructure-led agenda in Myanmar unfolded in three stages, with greater opposition rising against multibillion-dollar projects, including the suspension of $3.6 billion Myitsone dam, when the country was under a pro-military government before the 2015 election.

"The Chinese became uncomfortable after that, and made a big effort to win over the NLD government when it came to power," Khin Zaw Win, director of the Tampadipa Institute, a Yangon-based think tank, told Nikkei Asia. The China-Myanmar Economic Corridor "was launched with no public disclosure during Suu Kyi's tenure... China expected [it] to pick up steam after the 2020 elections."

But such bonhomie between China and the NLD government hit a nerve with the military's high command, said Kobsak Chutikul, a former Thai ambassador who engaged with Myanmar's political players in recent years.

The generals were upset at China courting the civilian power center that emerged in 2016 and not remaining beholden to the military as before, he added.

"The military felt threatened by this," Kobsak said.

The ensuing turf war even saw the Tatmadaw, as the Myanmar military is known, accuse Suu Kyi of "becoming too close to China," Kobsak said. "It was undermining what the military felt was its area of control and monopoly -- dealing directly and overseeing the relations with China."