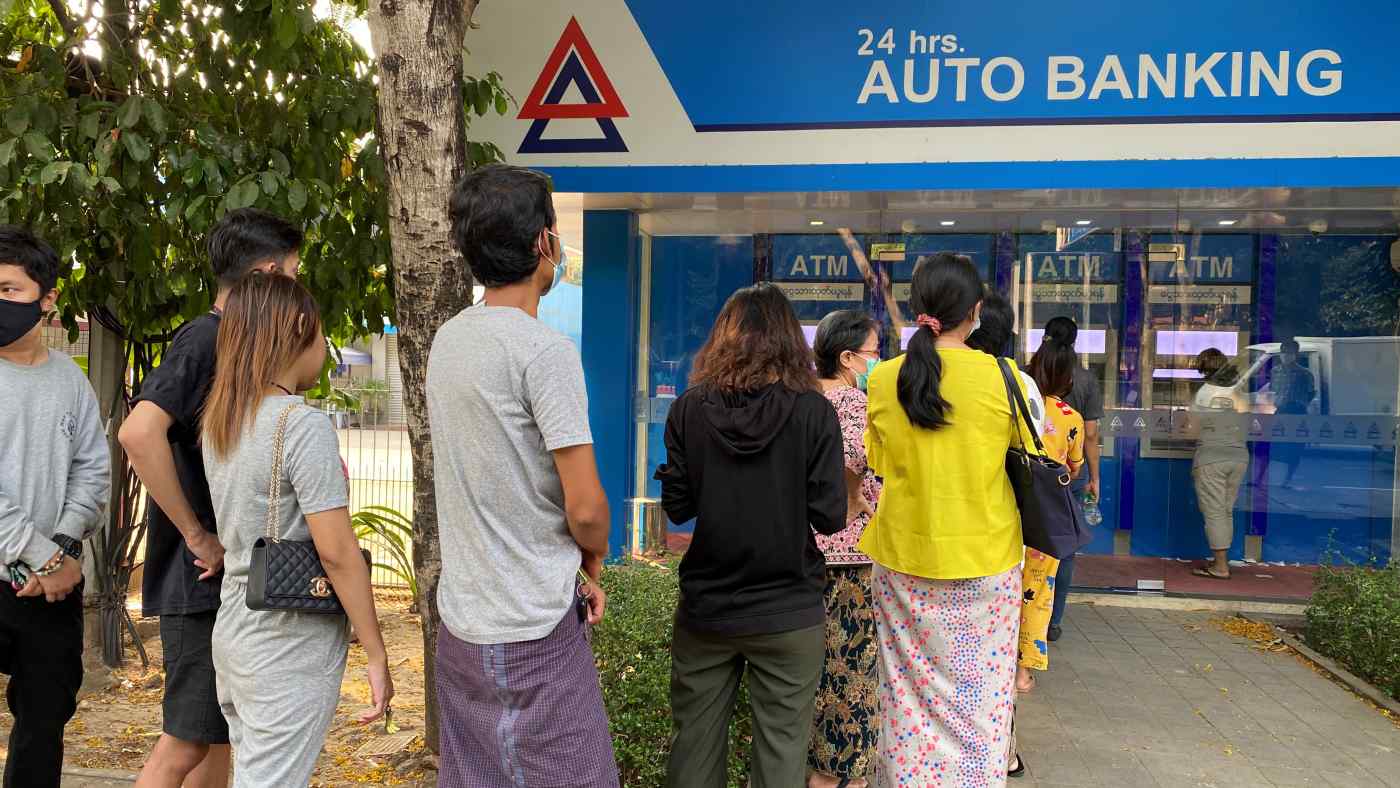 People line at ATMs in Yangon on March 13. Lists of those that still have cash are circulating on social media.
Nikkei staff writerMarch 19, 2021 12:35 JST | Myanmar
CopyCopied

BANGKOK -- The business sector in Myanmar is struggling to make payments. Commercial transactions and wage payments are being disrupted because many bankers are refusing to show up at the office in a bid to protest the coup.

Protesters have been calling for civil servants and private-sector workers to join the civil disobedience movement. Bank branches have been closed since mid-February, prompting depositors to line up at ATMs. Little cash is left in most ATMs, and lists of those that still have cash are circulating on social media.

The chaos is starting to affect Japanese companies in Myanmar. In the Thilawa Special Economic Zone, managed by companies such as Japanese trading house Sumitomo Corp., wage payments and procurements of raw materials, components and services have become disrupted; many factories have suspended operations, citing reasons such as protecting workers as well as the banking issue. On average, 54 companies were operating in the industrial park from March 8 to 12 -- only 65% of the number before the coup.

A number of Japanese companies said they were not able to make payments or receive money from their customers. A person from the Japanese construction company Kajima said, "We are unable to make payments to local firms that have accounts at banks that are not operating." Kajima is developing a commercial and residential complex in Yangon, the biggest city in Myanmar.

A local branch manager of a Japanese trading house also said, "Payments from some customers are not coming in."

The turmoil in the business sector is expected to continue as financial institutions continue to be paralyzed. "I cannot make payments to suppliers because the banks are closed," said a man operating a consumer electronics shop in central Yangon. Although the wholesaler for the shop understands the situation, the shop owner is worried that the banking issue will damage his business if it further drags on.

"I couldn't sleep in early March because I was worried whether I could pay wages to the employees," said a manager of a Japanese sewing factory with thousands of workers. "I managed to gather cash for the salary payments, but I don't know if I can do it again next month."

The military is pressuring banks to reopen operations. The State Administration Council, Myanmar's highest decision-making body set up by the military after the coup, told the central bank to move accounts from commercial banks that have refused to resume operations to state banks or military-linked banks, according to a leaked document dated March 9.

Some banks have resumed operating under the pressure from the military. But the number of reopened branches is extremely limited.

A 25-year-old banker who participates in the civil disobedience movement suggested that resuming operations will merely result in throngs of people rushing to banks to withdraw deposits. "I want to urge all people to continue to support the disobedience movement until we achieve what we want," he said.

Bank operators are caught between the military pressuring them to reopen, and citizens and employees supporting the civil disobedience movement.