Coup strands over a million Myanmar workers in Thailand

Largest Burmese community abroad can only watch the unfolding misery 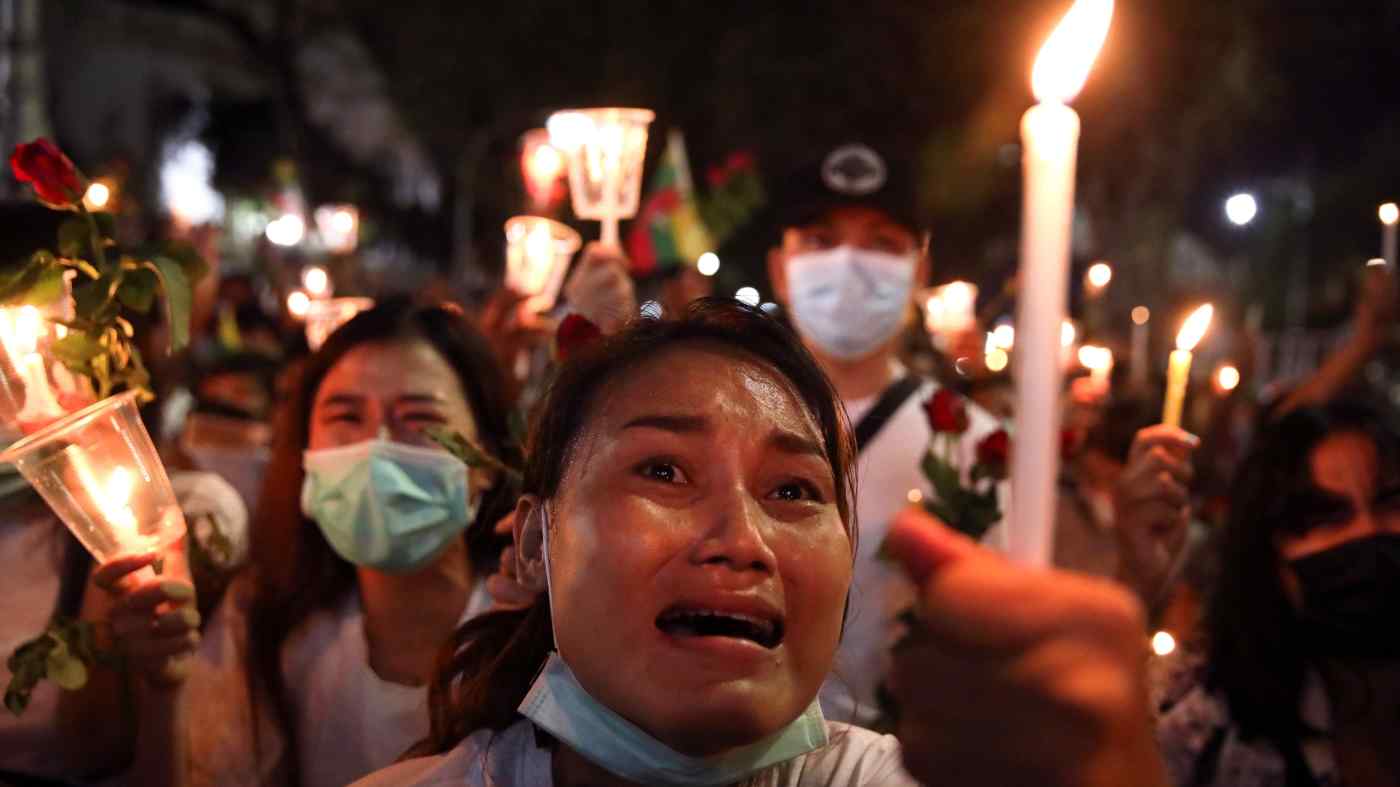 People attended a candlelit prayer vigil outside the U.N. offices in Bangkok on Mar. 4 for those who died in anti-coup protests in Myanmar.   © Reuters
APORNRATH PHOONPHONGPHIPHAT, Nikkei staff writer March 12, 2021 13:53 JST | Thailand
CopyCopied

BANGKOK -- More than one million workers from Myanmar living in Thailand are standing by helplessly as the military ramps up brutality in their home county to try and break the civil disobedience movement.

According to Thailand's labor ministry, there were 2.5 million migrant workers registered in the kingdom at the end of 2020. Of those, more than one million were from Myanmar, making Thailand host to the largest Burmese expatriate community in the world.

There are also many thousands more who are undocumented, according to the Labor Protection Network. Migrant workers from Myanmar often fill jobs that most Thais avoid because of their toughness, dirtiness or poor wages.

"I am very angry at the junta," Japan Kyanphar, a migrant worker from Mon state, told Nikkei Asia in late February. He has worked at a Thai fishery company in Samut Sakhon province for 20 years. "I hate the coup as it is dragging my country backward to 30 years ago, but I don't know what I can do to help my people," he said.

After the coup, Japan Kyanphar took to the streets with hundreds of fellow migrant workers in Samut Sakhon in a show of solidarity with the civil disobedience movement in Myanmar. They beat pots noisily, hoping to attract international attention and express their opposition to the coup. But the rally only lasted about 10 minutes.

"We can't do more because the Thai authorities keep warning us not to stage protests that could cause international tension," he said.

The Thai government wants the Myanmar community to remain calm, and not get involved with anything that could adversely affect Thailand-Myanmar relations. The authorities are also anxious to avoid any sparks that might ignite a recurrence of last year's pro-democracy protests in Thailand.

No announcements have been made explicitly forbidding protests about Myanmar, but COVID-19 pandemic restrictions on gatherings have been invoked to keep protests in check.

On Feb. 2, the day after Senior General Min Aung Hlaing's coup, hundreds of protesters gathered outside Myanmar's embassy in Bangkok. Waving banners, they demanded the release of Aung San Suu Kyi, leader of the National League for Democracy, which won the general election in November by a landslide. The protesters dispersed peacefully after a couple of hours.

"We were told we should stop protesting after a few hours or else we would break the emergency decree still in place to curb the COVID pandemic," said Nang Kham Saung, a 29-year-old student from Myanmar who is pursuing an MBA at Mahidol University.

"No one wants to be arrested, including me," she said, "I still want to study and don't want any trouble in my life. So, I had to stop protesting even though I was very angry and badly wanted to do something to help my country."

In Tak province, which borders Myanmar, Governor Pongrat Piromrat told Nikkei that about a dozen Burmese students and workers had gathered to protest. They were told not to repeat the demonstration to avoid damaging relations with Myanmar.

"They were quite obedient, and we did not have to use any more stringent action against them," said Pongrat. "They know they have to comply with Thai law."

Many of the workers stuck helplessly in Thailand feel the coup has crushed the prospect of any economic improvement in Myanmar. Nam Kham Saung hoped her MBA would be the key to a better life when she got home. She has saved extra money working as an interpreter of Chinese, and was planning to start her own business in Yangon. "The coup will hurt the economy," she said. "There will be no chance for me to open the business I dreamed of."

"Burmese living here illegally have a terrible fear of arrest and being beaten by the Thai authorities," Patima Tungpuchayakul, the 39-year-old co-founder in 2004 of the Labor Protection Network, told Nikkei. "Most of them do not know the Thai language or Thai law."

Patima has dedicated herself to helping migrant workers. She said the more literate ones from Myanmar have been following developments on Facebook, but the more they learn, the more angry and despairing they become.

Pressure is building to develop an assistance network. A 28-year-old businessman who runs a traditional Burmese restaurant in Bangkok, has launched a Facebook campaign to collect funds to assist people in Myanmar.

"We have asked for a donation of 100 baht ($3.3) from around 20,000 people," he told Nikkei. "We may get around two million baht to help support people in the civil disobedience movement."

He declined to give further details, particularly about sending money into Myanmar, for fear of being investigated by the Thai authorities.

However, business people at the border who trade with Myanmar told Nikkei that the funds are likely to be carried into the country in cash for distribution. A businessman in Chiang Rai valued local border trade at around 50 million baht per day. "The movement of two or three million baht in cash will not attract much attention," he said.

On Thursday, the Thai Ministry of Foreign Affairs issued a statement on the situation: "As a next-door neighbor sharing a long common border, with Myanmar and Thai peoples having close interaction in many aspects, Thailand continues to follow developments in Myanmar with much concern. As with other countries, we are saddened by the loss of lives and sufferings of the people of Myanmar due to escalating violence in the country."