Jakarta steps up push for ASEAN-led solution to Myanmar crisis 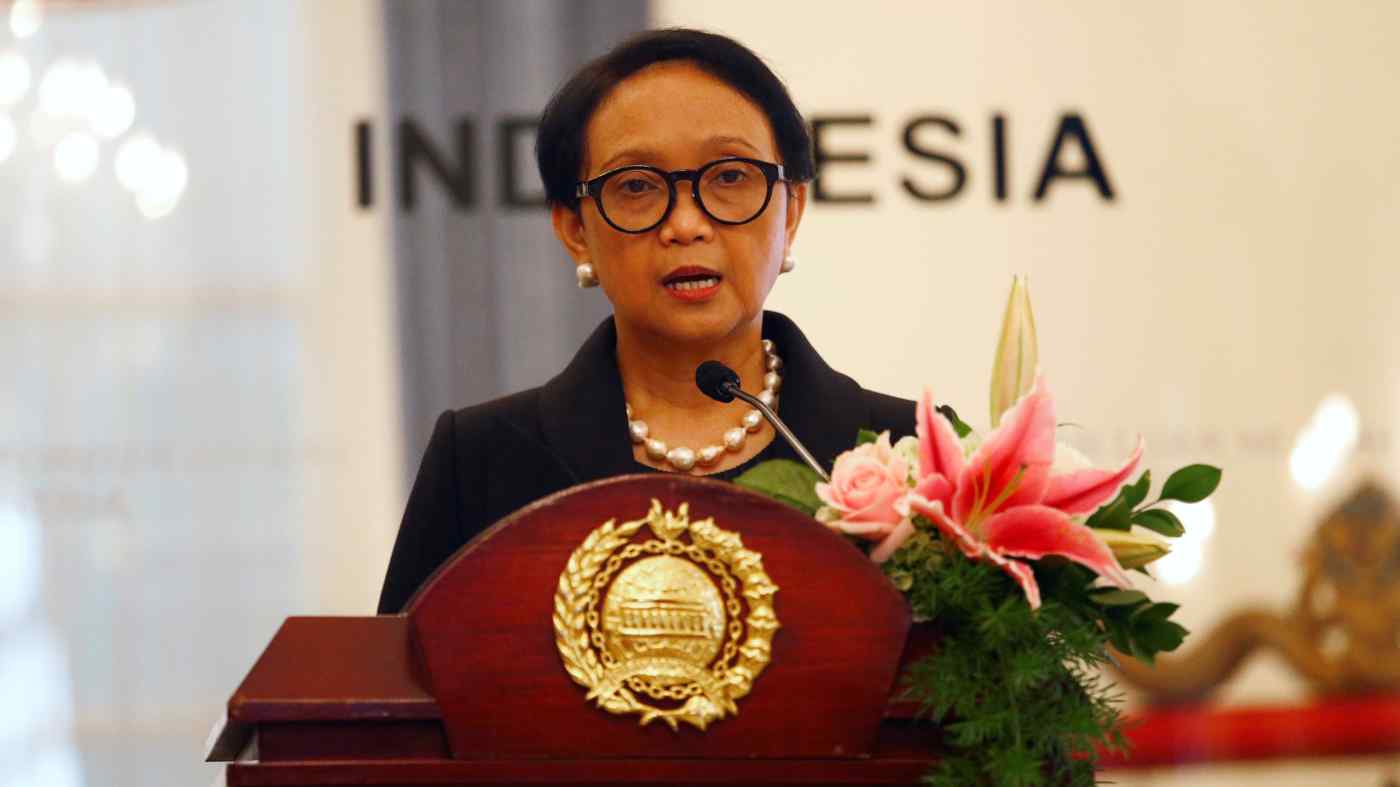 JAKARTA -- Indonesian Foreign Minister Retno Marsudi met her Myanmar counterpart Wunna Maung Lwin in Bangkok on Wednesday, as Jakarta steps up its push for an Association of Southeast Asian Nations-led resolution of the crisis in Myanmar.

Marsudi traveled to the Thai capital after canceling a planned trip to the Myanmar capital of Naypyitaw.

Indonesia faces the difficult task of uniting the 10-nation ASEAN bloc behind its efforts, starting with holding a ministerial meeting on the crisis.

"Thailand has conveyed its agreement, and so far ASEAN countries have expressed their commitment to support a meeting of ASEAN foreign ministers," Marsudi told reporters.

After the meeting, Marsudi told reporters she had stressed the need to avoid bloodshed in Myanmar during her meeting with Wunna Maung Lwin, as well as the importance of an "inclusive democratic transition process" involving reconciliatory and trust-building dialogues between conflicting parties in Myanmar.

She also asked the Myanmar authorities to allow humanitarian access and visits to the detainees. The minister said Indonesia will continue to communicate with all sides in Myanmar.

"We need to keep communicating with all parties so that messages can be conveyed, contributions can be offered, and the situation will not worsen and resolution can be done," the foreign minister told a new conference Wednesday evening. "The safety and wellbeing of the people in Myanmar must be the top priority. Their wishes must be heard." Reuters had reported on Tuesday night that Marsudi would be the first foreign envoy to visit Myanmar since the Feb. 1 coup, citing a leaked document from the transportation ministry in Jakarta. But an Indonesian foreign ministry spokesman said Wednesday there will be no Myanmar visit for the time being.

On Wednesday morning, Marusdi tweeted that she has been holding calls with counterparts in the Philippines, Vietnam, Brunei, Malaysia, Singapore, Cambodia and Laos "on developments in #ASEAN."

Last week, she went to Brunei to meet the king -- Brunei is the ASEAN chair this year -- and to Singapore for discussions with the city-state's foreign minister.

Marsudi said the king supports a proposal for a special ASEAN meeting to discuss the Myanmar situation. Singapore is also positive toward the plan, with its foreign ministry saying the summit should be held as soon as possible.

Marsudi's trips follow talks between Indonesian President Joko Widodo and Malaysian Prime Minister Muhyiddin Yasin in Jakarta on Feb. 5, where they agreed to call a special Myanmar meeting. The foreign minister also has held calls with U.S. Secretary of State Antony Blinken and the foreign ministers of Japan, India and China.

A Reuters report on Monday said Indonesia was devising a plan to hold the Myanmar military junta to its promise of new elections, prompting a rally by hundreds of people outside the Indonesian embassy in Yangon, the economic capital of Myanmar. Protesters were angered by the report, saying they do not want another election and that their votes cast in November should be respected. The foreign ministry in Jakarta on Tuesday denied the existence of such a plan.

Indonesia faces a tricky path ahead in its pursuit of a peaceful, ASEAN-led solution through dialogue to restore democracy and national reconciliation in Myanmar.

Indonesia is concerned that the junta will harden its stance should the U.S. and the European Union impose stricter sanctions on Myanmar's military, potentially leading to further divisions within ASEAN. A senior official at the Indonesian foreign ministry said: "If ASEAN does not take the initiative in setting a direction, the organization will weaken and have a serious impact on the region."

Indonesia, the largest member of ASEAN, accounts for 40% of its population and gross domestic product, and the organization's secretariat is based in Jakarta. The country has a track record of communicating with the bloc to discuss pressing issues. In 2011, Jakarta hosted a special foreign ministers' meeting about the border dispute between Thailand and Cambodia, and with Malaysia it initiated the holding of ministerial-level talks on the Rohingya issue.

But ASEAN's consensus-based decision-making often struggles on divisive issues, owing to the bloc's diverse political systems, which range from democracies, communist states and the former military government in Thailand. Since the organization's establishment in 1967, unanimity has been the basic principle to decide on issues in order to gain bargaining power with major powers.

Myanmar, meanwhile, seems to have rejected Brunei's offer to hold a special foreign ministers' meeting. Within ASEAN, the response to the coup has been divided . Thailand and Cambodia remain silent in accordance with ASEAN's principle of non-interference in internal affairs, while Indonesia, Malaysia and Singapore have expressed concern.

Teuku Rezasyah, a foreign policy expert from Indonesia's Padjajaran University, said Indonesia must tread very carefully, citing the issue of the Rohingya refugees, who face the risk of "more exodus" if the domestic political situation is unresolved.

"We cannot pressure Myanmar. We can tell them this is our idea... you have to take action however small it is. Otherwise it will be difficult for us to maintain dignity," Rezasyah said. "ASEAN is in a difficult situation. If it's not being proactive, outsiders will continue to pressure Myanmar and therefore potentially send it closer to China. That's not what ASEAN wants."

Thant Myint-U, a renowned historian of Myanmar, is not optimistic that ASEAN-led negotiations will be successful.

"Mediation next to impossible now," he tweeted after reports the Indonesian foreign minister had canceled her trip to Myanmar. "What's needed are creative ways to support the Burmese people at this critical juncture, in their demands for democracy, including the poorest and most vulnerable, who after a year of economic collapse were already facing a catastrophic future."